Have you noticed an increase in the amount of ads in your Twitter feed of late?

At a quick glance, my own Twitter feed now has around one Promoted tweet every six slots or so, and it now updates every time I refresh, when I used to only see ads early in the stream. Twitter has been slowly upping its ad load for some time, but it seems to have been pushing them a little harder in recent weeks.

We asked Twitter if it had increased ad load - here's Twitter's response:

"We regularly experiment and deploy changes to our advertising experience, while aligning to our principles and standards of a high-quality experience on Twitter. We are constantly innovating and testing, and will continue to adapt as we learn."

So that's a yes, in a roundabout way. You are, likely seeing more ads in your Twitter feed, as Twitter's testing new display methods, which, at least in part, would be prompted by the platform's need to address slowing ad spend as a result of COVID-19.

Twitter flagged a slowdown in ad spend in its Q1 report earlier this year, noting that:

"From March 11 (when many events around the world began to be canceled and many in the US began sheltering in place) until March 31, our total advertising revenue declined approximately 27% year over year."

With fewer businesses in operation due to the shutdowns, and particularly fewer events and sports, Twitter is feeling the impacts, so it's likely that it needs to up its ad load in order to generate more revenue, while also helping it capitalize on increased usage amid the pandemic.

Twitter saw a 24% increase in usage, YoY, in Q1, so the opportunity is there for ad exposure for those businesses that remain able to operate. It seems that Twitter is looking to capitalize on this - which, for consumers, means a few more Promoted tweets in-stream (likely not a big deal for most), and for advertisers, more opportunities to boost exposure to the Twitter audience, which is increasingly active at present.

And if usage levels remain stable, you can bet that Twitter will look to maintain any such increases moving forward, as a means to maximize revenue potential.

In addition to this, Twitter has also outlined a recent update to its algorithm process, which will enable it to show you more relevant trends, based on your behavior, every time you log in.

"In the default configuration, a Twitter user's home timeline will show the top Tweets first. The system that picks the top Tweets uses a machine learning model to predict what Tweets you will be most interested in [based on your activity]. The model learns how to make these predictions via training, however, since user interest is constantly changing, this model must be updated regularly. In a recent effort, we have successfully reduced the time to refresh this model from 7 days to about 1 day via a redesign of our data logging pipeline." 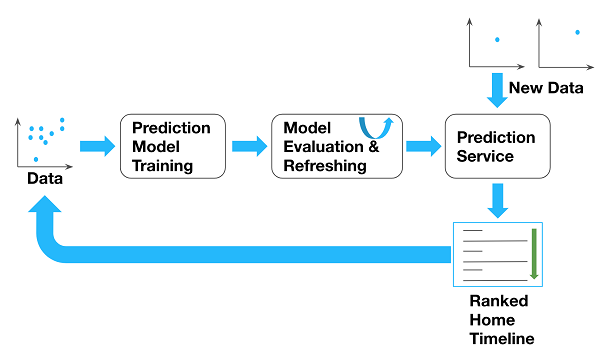 In other words, it used to take Twitter's system a week to learn from your evolving interests, based on your on-platform activity, but now, it can update its recommendations within hours, making your tweet feed more time-relevant.

"The performance of the new model is better compared with the old model for both model training and real-world prediction after refreshing the model. Users come to Twitter for the most up-to-date information and since the momentum is fast changing on Twitter, newer data and models are preferred."

So, more ads in-stream, but a more relevant stream overall, based on Twitter's advancing systems. At times, I haven't personally felt confident that Twitter's system is great at detecting my interests (based on the topics displayed in the Explore tab), but it'll be interesting to see if that changes, in line with trending shifts, based on this update.