Twitter has seen a major jump in usage amid the COVID-19 lockdowns, but it's also warned of significant impacts on its ad business going forward as part of its first-quarter earnings report for 2020.

First off, on usage - Twitter is now up to 166 million monetizable daily active users, adding 14 million on the previous quarter, which also represents a 24% increase year-over-year. 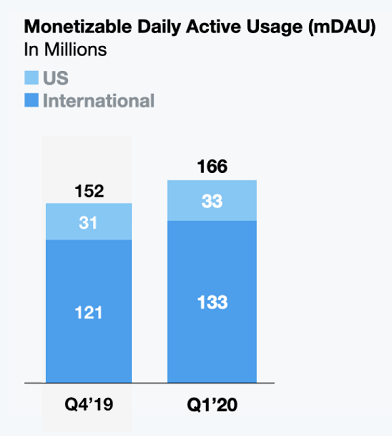 "The increase in mDAU was driven by typical seasonal strength, ongoing product improvements, and increased engagement due to the COVID-19 pandemic. We saw strong mDAU growth throughout the quarter, with a significant acceleration in March as the pandemic became global. The absolute number of mDAUs stabilized toward the end of March as many people around the world settled into new routines."

The current situation makes it hard to provide an accurate comparison to normal, as it's not a normal situation, and as such, it's difficult to say how sustainable those usage numbers will be. Facebook clearly warned, in its most recent earnings report, that at least some of the increased usage it's seeing will subside as the lockdowns are eventually eased, and clearly, Twitter is benefiting from more people looking for up to the minute updates and news on the situation.

As Twitter notes, its usage has stabilized, but it'll be interesting to see if there's a significant drop off later in the year - or if Twitter is able to showcase its offerings enough to keep more people coming back, more often.

In terms of regional growth, Twitter says that its average international mDAU was 133 million, compared to 121 million in the previous quarter. Twitter is particularly popular in Japan, which began dealing with the impacts of COVID-19 a little earlier than the US, which subsequently had an impact on performance. 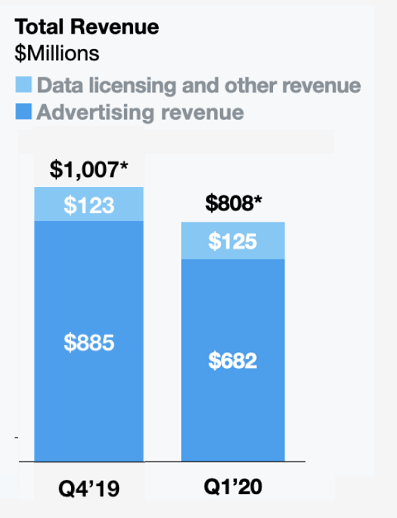 Ad revenue was at $682 million, reflecting stable growth - though as noted, Twitter has warned of significant potential impacts due to COVID-19 on this front:

"The quarter was best seen as two distinct periods: January through early March, which largely performed as expected, with strength in the US and some COVID-19 related weakness in Asia, and early March through the end of the quarter, when the pandemic became global. As an indication of the rapid change in advertising behavior, from March 11 (when many events around the world began to be canceled and many in the US began sheltering in place) until March 31, our total advertising revenue declined approximately 27% year over year."

Twitter flagged these impacts back in March, when it withdrew its revenue forecasts, with the platform's increased exposure to Asia meaning it had more early indicators as to a coming slowdown in demand. Twitter also makes the valid point that the lack of live sports and events has also caused a slowdown. Major events are often a key draw for Twitter discussion, which subsequently attracts increased ad spend. Without them, Twitter loses that element.

In terms of ad performance, Twitter says that its total ad engagements increased 25%. It's just seeing less demand, overall, due to COVID-19. Another point worth considering for marketers.

In terms of future strategies, much of this year will remain under the cloud of COVID-19, with no clear guidance as to when the impacts will be lessened and we can move back towards a level of normal. This is the same for all businesses, of course, but for Twitter, it means that it won't have a solid outline of where it stands until at least Q2, when it's able to assess what numbers its seeing, and if there's been any recovery.

Twitter says that it's focused on improving the effectiveness of its ad offerings, with specific updates coming for its targeting systems, in order to help marketers reach their target audiences.

Twitter's still working to update its targeting options after problems with its Mobile Application Promotion (MAP) system, which had been incorrectly utilizing user-provided data (Twitter issued a public apology for such back in October). Twitter says that it's "next gen MAP format" is now in testing, with plans to expand the test "over several phases". ​

Also worth noting - Twitter has seen a big jump in admin costs of late:

"General and administrative expenses grew 42% to $109 million, primarily due to higher personnel-related costs, provision for bad debts, and professional fees, offset by higher facilities and supporting overhead expenses allocated to other functions."

Which sounds pretty vague. Overall, Twitter's total costs grew 18% to $815 million in Q1, though it is expecting to see lower than anticipated expense growth over the full year.

Twitter also pointed to its ongoing investment in "health" updates - like improved policies around hate speech, increased efforts to reduce the spread of misinformation and updated election integrity tools - as key investments, that have added to costs, but are delivering the desired outcomes, in terms of increased usage and engagement. As such, Twitter is planning to push ahead with its investment in more staff to manage such projects.

Also, Fleets got a brief mention in Twitter's report:

"We launched Fleets as an experiment in Brazil to provide a new way to start conversations by sharing momentary thoughts. From the test, we are learning how adding a new mode of conversation changes the way people interact, and if it allows our audience to share what they’re thinking more comfortably. We’ll continue to iterate based on our learnings and we look forward to more people on Twitter experiencing Fleets soon."

So no news on an expanded roll out as yet.

Overall, it's a pretty flat report from Twitter. The early part of the quarter showed positive signs, but the latter is impacted by COVID-19, which nullifies it somewhat. The key for Twitter now is keeping hold of those users that are coming across during COVID-19 - if Twitter can improve its systems and provide a better experience for this increased audience, that will be key to the platform coming out the other side of the pandemic in a stronger position.