Twitter Rolls Out New DM Filter Tool to All Users

As Twitter continues to work on developing its private messaging and connection tools, this week, it's rolling out its new, advanced direct message (DM) filtering process to all users, which will keep you from having to look at those unwanted, unsolicited images and videos that strangers have sent through to your Twitter inbox.

We tested, and turns out filters help you cut through the noise to find gems. Who knew. So we’re rolling out this filter to everyone on iOS, Android, and web!

As you can see in the GIF above, the new process will be applied to your 'Additional Messages' - those received from people you're not following. Now, if Twitter's system detects potentially offensive material within these DMs, they'll be sent to a new, separate section, which users can either opt to view or not. 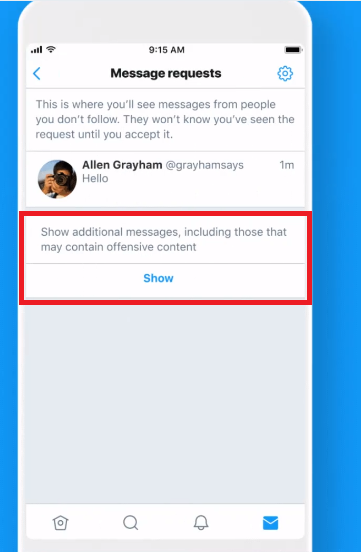 As noted by Twitter, initial testing of the functionality has shown that the option has improved the user experience, leading to the full roll-out of the option.

The value of the option will obviously be relative to how many DMs you get, but the larger your profile becomes, the more you're going to be sent these types of unsolicited, unwanted images and conversations. Having an automated option to get rid of them will certainly prove beneficial - particularly for high-profile female users who are sadly, often victim to a deluge of unwanted messages.

The update's aligned to Twitter's broader efforts to "improve the health of the conversations on the platform", which has become a key point of focus for the company of late. And as noted, Twitter's also working to give direct messaging more focus, which is no doubt a result of increased messaging usage, again underlining the need for such a tool.

It's a positive move for Twitter - a small change, sure, but one which makes a lot of sense, and could have significant impacts for vulnerable users.