In the wake of the presidency of Donald Trump, which saw social media become a key platform for communicating Government policy stances, and connecting leaders more directly with their constituents, Twitter is now calling on the public to help it formulate definitive rules around how politicians are able to use the platform, and what sort of restrictions - if any- should be placed on their tweets.

"Politicians and government officials are constantly evolving how they use our service, and we want our policies to remain relevant to the ever-changing nature of political discourse on Twitter and protect the health of the public conversation. That’s why we’re reviewing our approach to world leaders and seeking your input."

Back in 2016, Trump tweeted that people who burn the American flag should be stripped of citizenship, while in 2018, Trump essentially threatened North Korean leader Kim Jong Un with nuclear war via tweet, amid rising tensions between the two nations. In May last year, Trump also tweeted an inflammatory comment about the Black Lives Matter protests, which seemed to imply that violent enforcement would be enacted against those taking part.

In each of these cases, Twitter was called upon to ban Trump from its platform outright, which it refused, noting that as a public figure, people had the right to see what he had to say, but Twitter did continually tweak and revise its rules to clarify exactly why it wasn't taking action, in an effort to be more transparent in its process.

Later in May, Twitter added warning prompts to two of then-President Trump's tweets which questioned the security of the voting process. That prompted Trump to call for an official review of Section 230 laws, which protect social media platforms from legal liability over the content posted by their users. 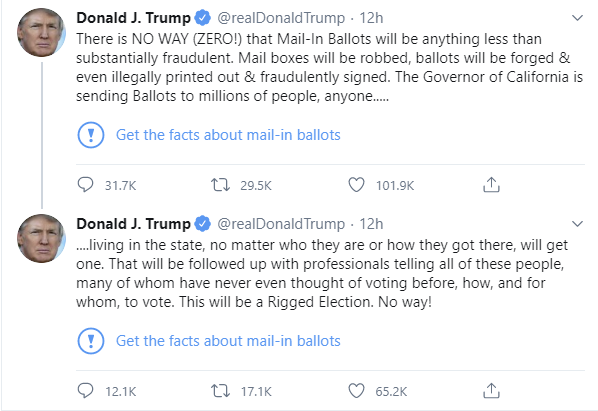 This was the first time Twitter had taken action on false claims made by Trump via tweet, and that sparked a whole new round of debate over free speech online, and the power social platforms now have to essentially silence elected officials if and when they see fit.

There are various considerations within this, but as noted, Twitter had been repeatedly called upon to ban Trump, and in each case, it had warned the Trump administration that it would, eventually, be forced to act. And while some question the platform's fact-checking process in itself, Twitter did worked within its Terms of Service by taking action on Trump's tweets.

The question then is whether Twitter, or any platform, should be allowed to block an elected official - the President especially - from communicating with voters.

This is essentially what Twitter's now trying to address, through broad public consultation, along with advice from various human rights, legal and civic engagement experts.

"Generally, we want to hear from the public on whether or not they believe world leaders should be subject to the same rules as others on Twitter. And, should a world leader violate a rule, what type of enforcement action is appropriate."

How much weight Twitter puts on such feedback will interesting to see, and it'll be interesting, also, to see just how many people respond to Twitter's call, which could provide a good scope as to what public expectations around such actually are.

Do people believe that leaders should be free to say what they like online, free of the regular rules of the platform, as had been the approach of both Twitter and Facebook for most of the last four years? Or should elected officials face the same restrictions and rules as everybody else, setting clear parameters for all on what's acceptable?

And then, who decides where the line is on this - and will everyone ever feel comfortable placing this level of trust in any such arbitrator?

It's a very complex issue, and there are no clear-cut answers, but this is Twitter's next step towards establishing a better way forward, to avoid similar conflicts and questions in future.

And it could also help Twitter provide more decisive feedback in any examinations of the existing Section 230 laws.

Twitter's public survey will be served to users in the app from March 19th to April 12th.