What if you could add a still image and a GIF to a single tweet? What about video as well – what if you had the capacity to attach all three different content types to your updates, so you could showcase different elements within each post?

That could be coming soon, based on this discovery by app researcher Alessandro Paluzzi. 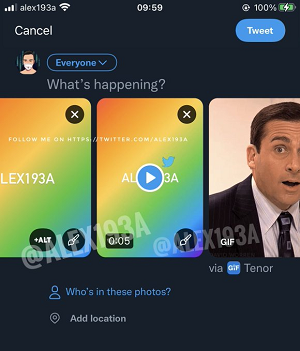 As you can see in this example, Twitter’s working on the capacity to insert different forms of media into a single tweet.

That could open up a range of new creative opportunities, and expand on your expressive tools – though it’s not coming soon, necessarily, especially with Twitter’s projects all on hold at present amid the looming Elon Musk takeover.

Indeed, we asked Twitter about the test, and it told us that it doesn’t have anything to share on the project right now. Which is not even an acknowledgment of this being in testing - but again, with Twitter in a state of flux, and uncertainty in many respects, it makes sense that it isn’t overly forthcoming on its projects, as it probably doesn’t know what’s going to happen with them either at this stage.

But it does look like this could be coming, and it could be a new consideration for your Twitter strategy.

For brands, that could provide a new way to showcase your products, with a still image promo shot, accompanied by video overviews within the same tweet. Users may also be able to find creative uses for multiple GIF reactions – or even GIF reactions that react to each other – while brands could also add in GIF responses to their product clips as another promotional consideration.

It seems like a good update, and while it may be technically challenging (note: I have no idea if it is), it could be a good way for Twitter to encourage more interaction and engagement, in more creative ways.

We’ll keep you updated on any progress with the project.