Twitter is testing a new way to maximize your Spaces content, with an option to create audio clips of up to 30 seconds from your audio broadcasts in the app. 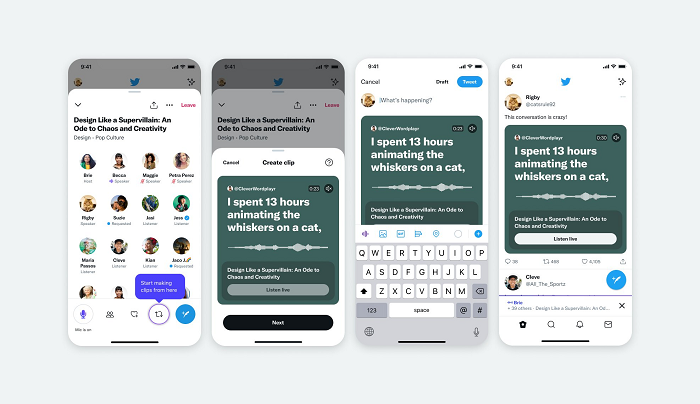 As you can see in these example screens, the new clipping tool enables you to create audio clips from a recorded Space, which can then be shared via tweet, with a link back to the full recording.

That provides another way to generate more content from Spaces, and boost interest in your broadcasts. Though Twitter’s still lagging Clubhouse, which added the same feature back in September.

✨ lots of new news in this video ✨

So functionally it’s not a huge leap forward for the format, but as with all social audio elements, the advantage that Twitter has is scale, and the capacity to reach a wider audience with its audio tools.

So while Clubhouse may be the originator, that’s largely irrelevant, as more people now seem to be using Twitter Spaces instead, and the more that Twitter can build out its Spaces offerings, the less it will get criticized and/or dismissed as a Clubhouse clone.

Though whether a significant number of users actually care about social audio at all remains to be seen.

Again, it was Clubhouse that sparked the original audio social trend amid the COVID lockdowns, providing a fresh take on social interaction and engagement. But a lot of that was also seemingly built on exclusivity, with Clubhouse initially only available via invite-only - because as the app opened up, and more people started broadcasting, user feeds got pretty crowded with irrelevant junk pretty quickly, which turned many away from the function entirely.

Spaces suffers from the same. Tap over to the Spaces tab and you’ll see a heap of crypto and Web3 focused rooms, which, if you’re into those things, could be great. But if you’re not, it’s not the most enticing experience.

Ideally, Twitter would be able to better highlight the most relevant broadcasts to each user in real time, based on what it already knows about their interests due to their engagement in the app, but thus far, it hasn’t perfected its matching. That could still happen, and Twitter should hold an advantage over Clubhouse in this respect, but I’m yet to see Twitter create a great, functional algorithm to highlight the most relevant content in my own experience (see also: Topics, accounts to follow, trends).

As for Clubhouse, it’s still growing in some regions, particularly India, while it recently saw an uptick in use in Russia, where it’s avoided government censorship. I mean, growth is growth, I guess, though not the ideal expansion - but there is still potential for Clubhouse to broaden its footprint by facilitating audio connection, especially in regions where many languages are spoken, and not everyone can write each as fluently as they can comprehend it.

But then again, a lot of its growth does also seem reliant on it not being censored by governments, because it’s not yet big enough to be a concern. Russian officials have tried to control what’s being shared on Twitter and Facebook, as has the Indian Government at different times. If either casts its eye Clubhouse’s way, that could become a problem for the app.

Spaces clipping is available to some Spaces hosts on iOS, with Android and web clipping coming soon