Twitter’s looking to up its enforcement around the misuse of people’s private content, with an expansion of its private information policy to now also include “private media”, which relates to images shared via tweet without the consent of the person depicted in them.

“Sharing personal media, such as images or videos, can potentially violate a person’s privacy, and may lead to emotional or physical harm. The misuse of private media can affect everyone, but can have a disproportionate effect on women, activists, dissidents, and members of minority communities.”

In line with this, Twitter says that, now, when it receives a report that a Tweet contains unauthorized private media, it will take action in line with its existing privacy enforcement options. 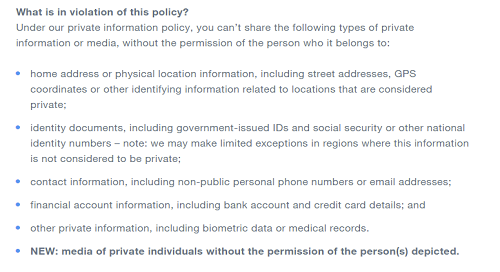 “May not post or share intimate photos or videos of someone that were produced or distributed without their consent.”

This new expansion seems more focused on doxxing and outing certain individuals in expanded application, though, technically, similar rules, at least in extreme cases, have been in place for some time, it’s just that Twitter is now bringing them into its broader policy, and ideally, making more users aware of such restrictions.

Twitter does note that the policy is not applicable to media featuring public figures or individuals “when media and accompanying Tweet text are shared in the public interest or add value to public discourse”, while Twitter also says that images and videos that show people participating in public events, like large scale protests and sporting events, would generally not violate this policy.

So there are some concessions for newsworthy or public interest discussions, which Twitter will judge on a case-by-case basis. But it could help to provide more protection for users, and raise more awareness of user rights in situations where their image has been used without consent.

But it could also spark confusion. For example, if you don’t have the permission of every person included in a video or image that you tweet, will you be in violation of the new rules?

Well, yes and no - in order for Twitter to enforce such, it first needs to receive a complaint from the individual/s depicted, or by an authorized representative. In the vast majority of cases, these people are not going to issue a takedown request, but if they do, you likely would be obligated to remove such, if Twitter deems that there’s relevant cause for concern, based on the complaint and context.

So there may be some changes in how such violations are enforced, but for the most part, regulations have already existed, in some form, for the most obvious and harmful instances.

But it could be another element to consider in your process – you can read more about the technical details of the update here.