Twitter certainly doesn't 'move fast' with its potential additions - as had been Facebook's guiding motto for many years.

Last September, Twitter revealed that it was working on a set of radical changes to how tweet replies were presented, adding in new signals which highlighted replies from the original tweeter, identified responses from connections, and so on.

The first iteration of this used color coding to signify each:

The test of these new 'conversational' features was eventually transitioned into Twitter's new beta test app - called 'Twttr' - which was launched to selected users back in March. The initial version of Twttr included a new variation of these same conversational features, though it followed the same idea, highlighting the varying responses in reply chains: 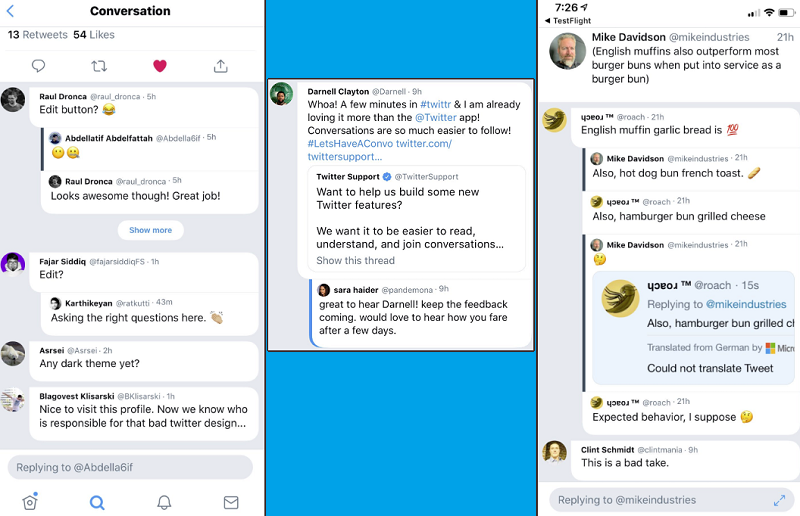 In April, Twitter took the next step on this, introducing a new test of yet another iteration of these features with selected users:

This new format included small notes to identify each, as opposed to color-coding, but again, it followed the same idea.

And now, Twitter's rolling out another version, using icons instead of words to delineate conversational contributors.

As you can see here, the new icons are less intrusive, but still provide the same additional context. You just need to know what each icon means.

Well, kind of. It's definitely less intrusive, and it looks better than having these sudden panels jutting out from the original tweet, or having prominent info bars beneath the handle. But the icons also aren't overly clear, and if Twitter's main concern is in clarifying how Twitter works, and providing more context to users who may not be as familiar with the process, this likely won't help.

But it does seem like a step in the right direction. I don't think Twitter's got it right as yet, but it is slowly getting there, and eventually, I think this will be a valuable and helpful addition to the tweet process, and one which will prompt more tweet engagement. But it's not quite there yet.

In some ways, it's good that Twitter is taking its time with this. We'll soon be coming up on a year since the initial announcement of its 'conversational' features, and six months since the public launch of the Twttr test app. That makes it feel like a long time in development, but most new features of this kind likely go through a similar amount of testing. It's just that we, as regular users, don't normally see it.

Twitter's trying to be more transparent, more inclusive in its testing, which has merit, but it also highlights just how long it can take, and makes Twitter seem like it's afraid to take decisive action. But it is moving. Slow, but this latest test shows that it is getting there.

It's not perfect yet, but maybe, with the addition of color-coding for each icon or something similar, it could be right, it could fit in and help better clarify tweet replies.

Either way, it's another thing to watch for in your Twitter process.