As Twitter looks to evolve its app in line with usage trends, the platform has announced the creation of a new beta program to test its 'conversational' options, which it's been working on over the last year. And those features could have a significant impact on platform usage moving forward.

As reported by TechCrunch, Twitter will soon launch the beta program with a select group of users.

"[Beta testers] will get access to features, by way of a standalone app, to use and talk about new features with others. Twitter, in turn, will use data that it picks up from that usage and chatter to decide how and if to turn those tests into full-blown product features for the rest of its user base."

Among the features to be tested are color-coded responses, algorithmically sorted replies and status updates - all of which were first discussed last September.

If adopted, those changes would have a big impact on platform use - the color-coded replies would be aligned with your connections (blue from people you know, for example), which would make them easier to find within large threads. That would also be assisted by algorithm-sorting, which, theoretically, would help users stay up to date with the most personally relevant aspects of any discussion, and help to boost engagement.

But those changes would be major, they would change the Twitter experience in a big way. At the moment, for example, users might tune in to Twitter to see the latest tweets about, say, a live sporting event, and they can tap into a thread of a wide range of people tweeting about the same thing, sharing jokes and memes and other notes about the action as it unfolds.

Would that process be enhanced by specifically seeing replies from people you're connected to, or is it more beneficial to be part of a conversation where everyone can get involved? I'd argue that the latter is more relevant - that's why, I suspect, Facebook's efforts to encourage more conversation around videos through enclosed group video 'watch parties' won't work, because people want to be part of the 'town square' feel of the broader discussion, the more connected, in-the-moment engagement that comes with seeing what everyone else has to say, and sharing with the group.

Filtering and color-coding replies could make you more aware of what friends are interested in, so there is likely engagement benefits. But it'll be interesting to see what the beta tests show in this regard.

The other options are less disruptive - status updates, for example, seem pretty generic and wouldn't appear to add much, while Twitter's 'ice breakers' could help trigger some new conversations. 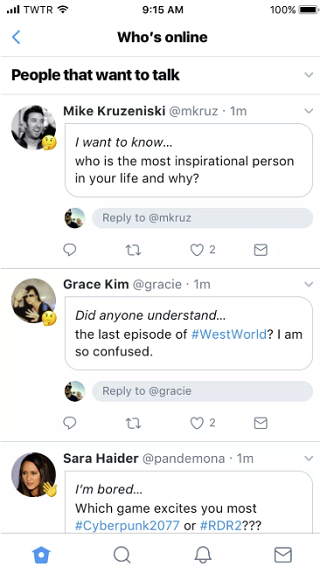 It's definitely a positive to see Twitter trying out new things, and working on ways to expand the conversation - and the more collaborative beta process will definitely help in the PR stakes (users generally complain that they were not consulted in such changes).

Hopefully, the program leads to a more effective roll out of new tools and options to encourage on-platform engagement.

And no, before you say it, tweet editing is not part of the current test schedule.

Twitter's new beta program is rolling out shortly. All users will be able to apply for access, but only a small group will be selected to participate.