Twitter's Working on a New Iteration of Tweet Reactions

After launching reactions for DMs earlier this year, it seems that Twitter's not done with emoji responses yet. 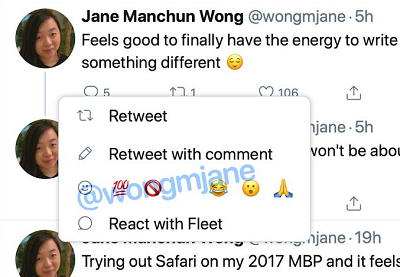 As you can see, Twitter's apparently testing a new option which would enable you to respond to a tweet with an emoji, in among the various other response options (which also, notably, include 'React with Fleet', in reference to Twitter's evolving Stories-style option).

How, exactly, that would work is unclear.

Would the reaction be attached to a retweet? Would a reaction count come up in a separate panel on the tweet display? Or will your chosen emoji response then replace the regular heart icon on the tweet itself in your view?

That's actually what Twitter tried back in 2015, when it first looked to latch onto the emoji response trend. 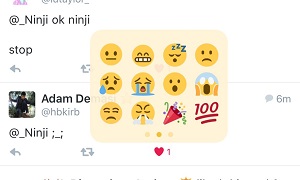 Following news that Facebook was working on emoji Reactions (Facebook Reactions was officially launched in early 2016), Twitter also began testing different formats, though they obviously didn't catch on, and Twitter never ended up releasing them. 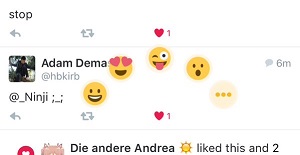 But as you can see, they did try a few different formats - and while they didn't gain traction back then, emoji usage has continued to rise on the platform, and as other platforms have added their own Reactions-style options, it's become an increasingly habitual behavior, an easy way for people to share an emotional response without having to specifically comment.

So maybe, now is the time - or maybe Twitter is seeing such high usage of Reactions within DMs that it logically believes there is enough demand for similar within tweets.

But it would be a significant shift. Twitter is predicated on short, sharp responses and engagement, and while only being able to 'heart' a tweet could seem a little restrictive, the general view is that the lack of Reaction-type options likely prompts more users to actually engage with tweets, and share their own thoughts. And because tweets are so short, quick reaction emojis probably aren't necessary anyway.

Unless, of course, they are.

Maybe, as noted, it's become such a habitual behavior that it simply makes sense to add it, and maybe, if you could just add an emoji in response to a tweet, it would be good, it would be handy. Maybe the heart (which, it's worth noting, used to be a star icon till Twitter changed it in 2015) is actually too limiting and people need more ways to react to prompt more active response from lurkers.

If Twitter does roll it out, it will have a range of implications - on data tracking, creative options, trends.

But it could also be a simple, fresh update.

There's no word from Twitter on a potential roll-out - we'll keep you updated if/when we hear more.

UPDATE (6/11): Twitter says that this was part of a test that they conducted last year which would have enabled users to quote tweet with an emoji. It's not, apparently, indicative of a new test of a Reactions style option.