What are "Suggested Clip" Featured Snippets, and How Do You Earn Them? [Video]

I'd like to share some new featured snippets - video featured snippets. They're suggested clips relevant to your query. I'm going let you know what the heck they are, and how you can earn them, in a quick video so you can go about snagging some of them for yourself. Let's dive in.

What is a suggested clip featured snippet?

Essentially, a suggested clip is a kind of special video featured snippet. It's new and it's where Google highlights a specific section of a video to answer your specific search query. It'll be a lot clearer for me to just show you.

For example, I've searched how to make a lightsaber because I'm a nerd. You can see here, this is probably different than what you are used to seeing. A lot of times you'll see just videos in the search, and we're all used to that, right? In this case, it's the same video, but they've highlighted a section of it, and that's the suggested clip part. You can see it's a 2-minute and 31-second video, but Google's saying, "These 24 seconds, I think, will answer your question." I hit play, notice it doesn't actually take me to YouTube, it's just a module that pops up and that's kind of interesting as well - although, I do have the typical YouTube controls. 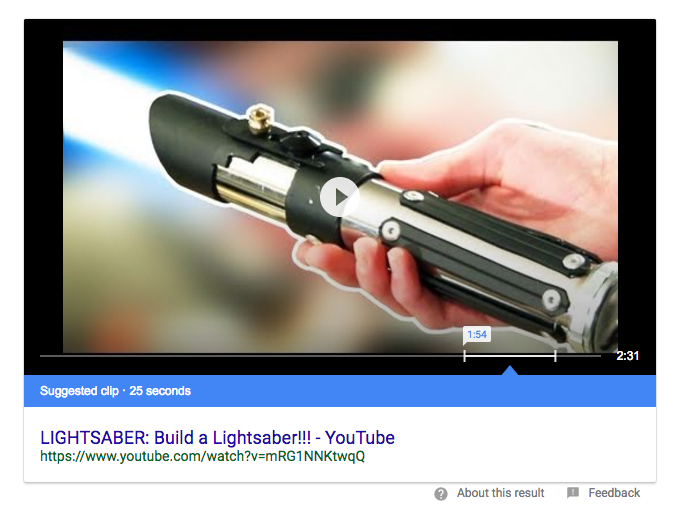 I've muted the volume but I've turned on captions. So you can see, this part of the video is exactly what I'm looking for - it's like, "Hey, these are exact steps. You're well on your way to getting that lightsaber."

Let's look at another example. This one is how to use an eyeliner brush. Again, you can see that they're saying, "These 23 seconds, starting at the 32-second mark, we think that's what you want out of this 3-minute video." If we hit play, notice it's a start of a suggested clip. If you watch to the end - not just the end of the video, but the end of their suggested clip - it'll say, "End of suggested clip," which is kind of interesting as well.

You're probably asking yourself, "Okay, that is kind of cool, but how do I go about earning a suggested clip?" It is pretty simple - here are three steps to follow:

After you rank in the top 10, make sure that you've uploaded a very clear transcript. This will enable Google to access a written copy of what's being said, so that they know very clearly what she's saying as her tips. That is also because the transcript has been corrected - so she's uploaded a transcript or gone in and corrected the auto-generated one. I have found - maybe it's my voice, not sure - but it's a 50/50 crap shoot what comes out of the auto-generated transcript, I always have to go in and fix those up or submit my own.

That's going to help Google really understand, the context of your videos so that you're set up to earn those featured snippets and earn those suggested clips.

This is a very similar step, but it has to do with your description.

You want a very detailed description. You can see she has a very detailed description here as well. Now, I think she's gone a little overboard and uploaded the transcript as the description - I don't think you need to do that because, in step two, you've already done that with the transcript. But you'll notice in the video that I upload today, this video, look at the description. I'll definitely put in there the usual, "Oh, check this out, it's going to teach you how to do this," but I'll put in the exact three steps that I'm telling you here, so that Google is just backing up the transcript and another place to pull featured snippet data from.

This is a simple three-step process you can use to earn these snippets. If you're kind of worried, like, "Well, this is new, it's kind of experimental," Do not be. Downside, if you can optimize your YouTube videos better, you can rank here, right? You can get a really high engagement ranking. Upside is, maybe you get a double-listing, you get the suggested clip and the video.

Now, a bonus tip would be that, for the suggested clips, I'm mainly seeing them around how-to type content. If I were making new content, or if I were editing videos, I would definitely start with things that are how-to, and have various specific steps to do. That tends to work, so start there.

These are new, so they can be a little hard to spot. If you find any, link to them in the comments and let me know about them, or hit me up on Twitter (@SEO) and let me know if you're able to earn any video featured snippets or any of the suggested clips.