YikYak Makes a Comeback, Four Years After Being Shuttered

I don't really know what to make of this, but if you're interested, for whatever reason, your favorite anonymous social media app YikYak is back in app stores in the US. 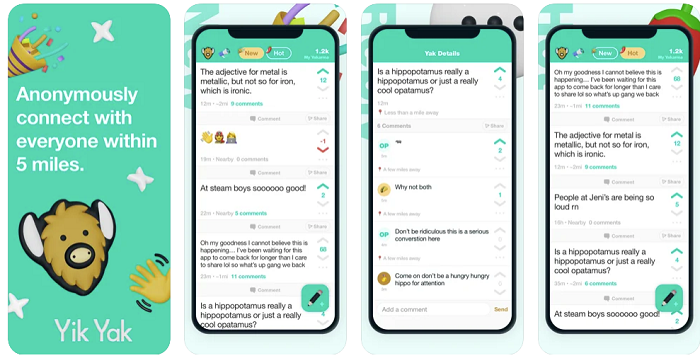 Why? Who knows, but the new owners of the app say that they believe that the global community "deserves a place to be authentic, a place to be equal, and a place to connect with people nearby." I'm guessing they see an opportunity to tap into local engagement in light of the pandemic, which has kept us all much closer to home - though even then, to release it now, at this late stage of the game, seems a little strange.

Just as it was designed in its first incarnation, YikYak enables users to share their thoughts anonymously, with other users in a 5 mile radius then able to view those comments and notes (called 'Yaks') and either upvote them or provide their own responses. So if you want to rave about a local business, you can make an anonymous remark that others can then celebrate and engage with, without the added pressure of attaching your name and image to it.

Which also makes it an ideal vehicle for criticism and abuse, which is a big part of why it was originally shut down.

Yik Yak was first launched in 2013, and at one point, was valued at more than $400 million, and had 200 million active users. But as with any anonymous platform, cyberbullies and trolls saw the opportunity to spread negative speech, while the company was also forced to backtrack on its anonymous approach by providing information to authorities when issued with warrants.

Eventually, Snapchat ate into YikYak's market share, and the limited use case for app, combined with the noted issues with trolls, made it a less relevant consideration. Which finally then lead to its closure four years in.

Clearly, the lessons of those first years have forced a change in approach, with YikYak's new website outlining various 'guardrails' and safety features to combat such concerns. But it seems like a moderation disaster waiting to happen, especially in the times of COVID misinformation and political division through society.

Is there really a place, or a need for YikYak in the current social media sphere?

YikYak seems to think there is:

Yeah, I'm not sure it's going to work out - but, if you're interested, you now have another option to get a feel for what people in your local community are interested in, which could be worth taking a look at. Maybe.

YikYak V2 is currently available in the US on iOS, with more countries and devices coming soon.