YouTube Adds New Features for the US Election Day, Including Prompts on Search Queries Related to Results

With Election Day fast approaching, and social platforms increasingly looking to ensure that they've done all they can to avoid being blamed for influencing the final outcome one way or another, YouTube has today outlined its latest set of prompts and reminders to help users get authoritative information about the poll on the big day.

First off, YouTube's adding a new election results panel at the top of related search results to ensure that users are aware of the status of the poll as counting is underway. 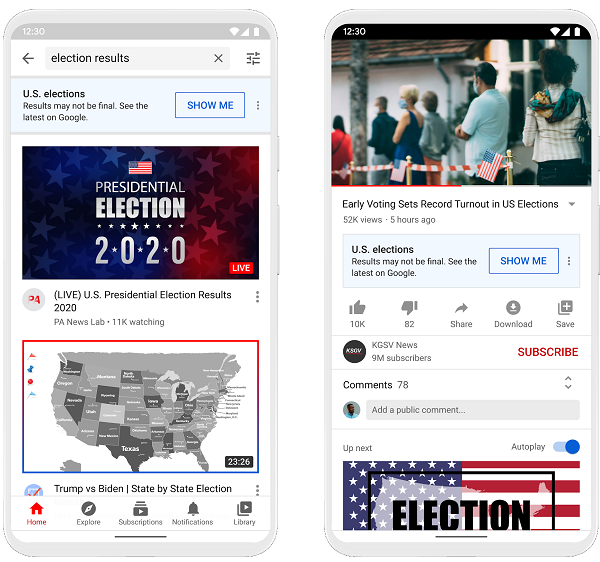 Social platforms have become increasingly concerned about the role they could potentially play in spreading misinformation about the results, with US President Donald Trump repeatedly avoiding questions around facilitating a peaceful transfer of power in the event of him losing the poll.

That, combined with Trump's ongoing criticism of the voting process, has seen some suggest that Trump could look to claim victory prematurely, via his massive social media presence, which could then lead to disruption amongst his supporter base as the true results are delivered.

Facebook, Twitter and now YouTube have all added measures to counter this, and ensure that users are aware of what the actual results are, based on official sources.

In addition to this, YouTube will also promote links to "timely, relevant information" towards the top of the YouTube homepage.

"Leading up to Election Day, you’ll be able to find a link to Google’s how to vote feature and on Election Day itself, a link to Google’s where to vote feature. Then, as polls close, you’ll see a shelf of live streams of election night coverage from authoritative news partners so that, like in previous elections, you can come to YouTube throughout the evening to watch election night unfold."

YouTube says that it will also continue to elevate authoritative sources, including news publishers like CNN and Fox News, within election-related news and information queries in search results, and in its “watch next” panels.

That, ideally, will slow the spread of misinformation and counter-narratives around the results, with YouTube's 'Up Next' recommendations often leading users down conspiracy rabbit holes that can cloud official announcements. YouTube is aware of this, and it has worked to improve its recommendations over time, with the removal or reduction in reach of several fringe movements.

Now, those efforts will be put to the ultimate test.

No one knows for sure what's going to happen around the US election, nor how the candidates and their supporters will react, but with such significant division present within American society, it's a particularly volatile situation, which could erupt, if authorities and officials are not careful.

And as noted, social media plays a key role in this. Any way you look at it, social platforms are now key providers of information, and as such, there is a level of onus on the platforms to police their systems to ensure they don't feed into dangerous narratives, and potentially fuel that angst event further.

We're now entering the final stretch, and thus far, the increased efforts of the social platforms seem to be working, and limiting misinformation. But then again, we didn't know about Russian interference on Facebook in 2016 till after the poll, so we'll have to wait and see what comes next.