YouTube has sought to answer some common questions about how its algorithm works when highlighting certain content to users - and why your video metrics may not always reflect performance.

In a new video on the Creator Insider channel, YouTube product managers Patricia and Rachel focus specifically on the impact of click-through rate (CTR) and average viewer duration (AVD), and how YouTube’s algorithm factors these into video distribution and performance.

Recently, YouTube outlined its coming analytics insights display, which will show creators their average CTR and AVD, helping to provide more insight into how their content is performing. 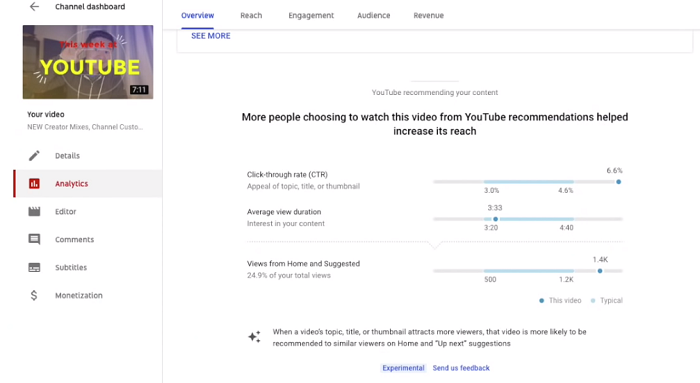 But as YouTube notes, that’s not always indicative – first off, the managers discuss the discrepancy that can occur when videos which have a low CTR still have high views.

“Click-through rate is a really tricky metric to understand. So, for a lot of creators, if you go in you look at your most successful videos the videos with the most views those are actually the most likely to have the lowest click-through rate.”

YouTube explains that this is because high distribution videos end up being shown to a much broader audience, which means that your content will be shown to a lot more people who are less familiar with you and your work. That, inevitably, means your CTR will be lower. So in some ways, it’s a consequence of success - the broader your distribution, based on how your video is performing, the lower your CTR will be.

“On the other hand, some of your smaller videos that were shown to a really relevant small targeted audience are the most likely to click, so those might have a really high click-through rate.”

So it makes sense that there will be a discrepancy between performance when your CTR is low on high performing clips, even if these data points seem like they should, generally, correlate.

But that can make it hard to measure your overall performance, or even track relevant trends. On this, YouTube recommends that creators take into account all of the available metrics, including these new insights, in order to get a better comparative view – i.e. if one metric seems out of whack, the other may better qualify it.

In isolation, any single metric could, theoretically, be confusing.

“In the long term, we hope to have A/B thumbnail testing eventually, which will help give you even more concrete answers.”

YouTube also addresses creator concerns around the impact of lower average view time resulting from external links, which could impact reach and distribution in the algorithm.

“So, in discovery, we actually look at how a video performs in the context it's shown. So when a video is shown on Home, how does it perform there? And Home and Watch Next each have their own ranking models.”

In other words, both these discovery surfaces have different ways of deciding which videos to show to users – which, of course, makes sense, as your Home recommendations will be based on your overall viewing history, and your ‘Watch Next’ listing will be influence by what you just viewed.

With respect to the impact of lower AVD, YouTube says that this is one of several factors which will influence what’s displayed in a users’ home feed.

“So overall click-through rate and average duration are pretty good indicators of how your video is doing in general, but they definitely don't cover all cases. […] Having more traffic from external is not going to hurt your discovery, or how your video is being recommended in Home or Watch Next. Sometimes you have to do deep-dives into individual traffic sources.”

YouTube also notes here that the new analytics display actually filters out CTR and AVD for both ‘Home‘ and ‘Watch Next’, making it easier to understand the impacts of external sources on those two metrics.

“So, in discovery, we actually look at both relative and absolute watch time, those are both meaningful signals and how your videos are going to be recommended. You would still need to do some cross-referencing, even if we swapped out ‘average view duration’ for ‘average percentage viewed’, because it's easier for short videos to hit a really high amount of average percentage watched. We can only focus creators on so many metrics, and we chose average view duration because how much time somebody spends with you in your content is a really strong indicator of interest. That being said, we want videos of all lengths to succeed on YouTube, and get discovered.”

YouTube also seeks to explain another common issue, where a video’s CTR will be good, and the AVD will also be good, yet the video will still underperform, making it difficult to understand what went wrong.

“CTR and AVD are among dozens of signals that we use for search and discovery - but there are also a lot of other factors that are going to influence how many impressions your videos will get, and how many people watch them.”

YouTube specifically highlights three other considerations to keep in mind:

YouTube also notes that it's working on new tools to provide more insight, and help creators maximize their video views. As noted, A/B thumbnail testing is one element, which will provide more specific insight into how your thumbnails are grabbing attention (or not), while YouTube’s also looking to add a new comparison tool for CTR and AVD, which would show how your channel is performing on these elements when matched against other channels similar to your own. This would be similar to the Page performance comparison tools available on Facebook or LinkedIn.

There are some interesting, valuable – though technical – insights here, which address some common YouTube algorithm pain points. If you’ve been trying to get your head around why your YouTube clips are performing, or not, these notes may help better contextualize YouTube’s internal processes.

You can watch the full Creator Insider video here.