While TikTok continues its meteoric rise, and looks set to become an even more influential platform this year, YouTube remains the clear leader in the online video space. And it looks set to maintain the top spot for one key reason – its revenue-sharing program, which sees billions shared with creators each year, and which no other platform is close to matching just yet, in terms of a sustainable creator monetization model.

YouTube’s Partner Program, which is now well embedded, and established within its own ecosystem, is now a key driver of the broader creator economy. And this week, as part of parent company Alphabet’s Q4 performance update, we got some more insight into just how significant this element has become.

As per Alphabet’s report, YouTube generated $8.6 billion in ad revenue in Q4 2021, while for the full year, YouTube brought in $28.8 billion in advertising income. 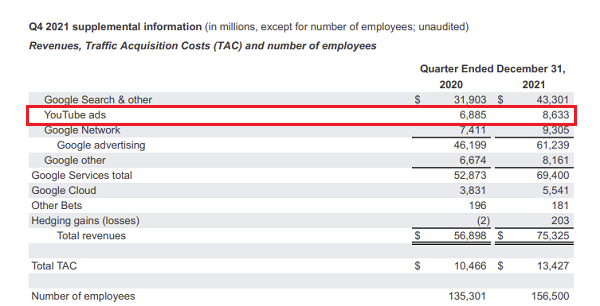 As you can see, that’s a significant jump on YouTube’s 2020 performance. And with around 55% of YouTube ad revenue going to creators, that means that YouTube paid creators more than $15 billion throughout 2021, a huge chunk of the overall creator economy funding.

Though that’s not exact. YouTube does share 55% of its ad revenue with creators based on the ads displayed on their clips, but it also has other ad options outside of this, while its move to monetize all content, not just videos in its Partner Program, as of November 2020, also makes the full revenue split less clear-cut than 55% of its overall take.

But even so, it’s still a huge amount, and a massive lure for YouTube, which the platform will continue to use to try and sway creators away from TikTok, by offering more incentive, more opportunity and greater rewards for their efforts.

YouTube, of course, has also been looking to combat the rise of TikTok with its own alternative in ‘Shorts’, which, according to Alphabet CEO Sundar Pichai, continues to see significant momentum.

“YouTube Shorts continues to drive significant engagement. We just hit five trillion all time views, and have over fifteen billion views each day globally. This is helping our creator community reach newer and bigger audiences. In fact, more people are creating content on YouTube than ever before. Last year, the number of YouTube channels that made at least $10,000 in revenue was up more than 40% year over year. And we're continuing to improve support for Artists and Creators.”

Pichai also notes that more creators are now earning money from YouTube’s non-ad products, including Super Chat and Channel Memberships, while its $100 million Shorts Fund is now available in more than one-hundred countries.

Creator funds like this can be problematic, in that the amount remains static, while usage changes (as recently explained by YouTube creator Hank Green). But YouTube, with its expanded funding models, is in a much more sustainable, profitable and beneficial position for creators than emerging platforms like TikTok, which is still working out how to best facilitate creator funding within short video clips.

Short videos are too short to insert mid-stream ads, which makes direct revenue attribution more difficult. That’s pushed TikTok to explore other alternatives, like brand partnerships, though it remains to be seen whether TikTok can establish enough of a business model on this front to keep its most popular creators around long term.

Another option that TikTok’s exploring is eCommerce, and enabling creators to generate revenue by selling products tied to their TikTok clips.

“We’re making it easier for viewers to buy what they see - and simpler for advertisers to drive action with innovative solutions like product feeds in Video Action Campaigns and emerging formats like live commerce. Backcountry.com generated a 12:1 return-on-ad-spend with product feeds in 2021 and plans to double its investment in 2022. While Samsung, Walmart, and Verizon partnered with creators to host shoppable holiday livestream events in the US”

Just as this is a key opportunity on TikTok, it’s also similarly significant on YouTube – and potentially, even more so, with many people searching on YouTube for product info, while YouTube clips are also linked to Google searches.

That could make this another valuable avenue for YouTube creator monetization, and another element in which YouTube could beat TikTok out, with more incentive for big-name stars.

Also interesting – Alphabet says that it will test some of its eCommerce ideas for YouTube in India first “because we can get quicker feedback”.

“A very dynamic, youthful population. And so we'll do it there, and then roll it out globally. So we are constantly looking for opportunities like that.”

And in another direct assault on TikTok, YouTube’s also now testing commerce links in Shorts:

“Super early also on testing how shopping can be integrated with Shorts. And so, again, early, but I find the opportunity space here pretty broad, and it's exciting.”

It’s interesting to consider the broader chess game at play here, and how the bigger players are looking to counter the growth of TikTok where they can, and hit the rising platform where it hurts, in terms of monetization and creator promotion tools.

TikTok is the cool app of the moment, and it’s definitely been great at capturing attention. But just like Vine before it, creator monetization remains a challenge - and already TikTok creators are calling for a bigger slice of the revenue pie, under threat of them potentially taking their content to other platforms instead.

Which is exactly what happened to Vine, with its top stars calling for more money as the app continued to grow, which eventually lead to them migrating to other apps.

TikTok is far bigger now that Vine ever was, and seems too big, really, to fail at this stage. But then again, if this does become a key sticking point, and creators do take their talents, and audiences, to other apps, it remains a possibility that TikTok might not make it in the long term.

Meanwhile, YouTube continues to go from strength to strength, and iterate on its already established monetization models. TikTok may be popular, but the battle for online video supremacy is still ruled by the incumbent, and will be for the foreseeable future at least.