And this time - in what seems like an entirely logic and on-brand move - Wojcicki ​has posted the update as a video on the site:

Wojcicki first notes that the YouTube economy is growing:

"Compared to last year, the number of creators with a million or more subscribers has grown 65%, and creators earning five or six figures, annually, has increased more than 40%."

It's amazing to consider the amount of money being generated by YouTube creators - did you know, for example, that this kid earns $22 million a year from his YouTube toy reviews?

It's enough to make you question your life choices, right?

Jokes aside, creating entertaining, engaging content is a skill, and that not everyone is able to do. And in addition to having some level of natural ability, you also have to actually do it. It's easy to look at something like 'Ryan's World' and think to yourself 'I could do that', but it's another to invest the time and effort into creating and posting content consistently.

But then again, as noted by Wojcicki, more people are doing just that. Maybe it's time for you to actually kick off that YouTube channel you've always wanted to get going.

But YouTube monetization isn't always a straightforward process. One of the biggest headaches for creators in recent times has been copyright strikes - if an entity claims that you've used their music or content in some way within your video, YouTube's processes, in the last few years, have enabled them to claim any revenue generated from that video as a result.

This system has lead to many frustrations and issues, something that Wojcicki recognizes, and says they're moving to fix:

"A few months ago, we made changes that removed the financial incentive to claim very short and unintentional music use. We also required timestamps for all manual claims so you know exactly which part of your video is being claimed, and made updates to our editing tools so you can easily remove manually claimed content from your videos."

There's still a way to go, but these changes show that YouTube is listening to its creators on this front.

"Thousands of channels have more than doubled their YouTube revenue by using new features that help fans engage with creators, like Super Chat, Channel Memberships, and Merchandise. More than 100,000 channels have received Super Chat, and some streams are earning more than $400 per minute as fans reach out to creators to say hello, send congratulations, or just to connect."

Super Chat, which enables fans to purchase credits to have their comments featured more prominently in live-streams, follows the model set by Chinese streaming providers, where live-streaming has become a massive business. YouTube recently added Super Stickers to expand on the potential of Super Chat - which doesn't seem like a huge element of YouTube monetization, but is clearly generating significant results for those that are using it.

"Over the last year, creators who used an active Story on their channel saw an average increase to their subscriber count of more than eight percent compared to creators without Stories."

I mean, everyone's on the Stories train now, why not YouTube? It could be another option to consider for those looking to boost their on-platform performance.

Wojcicki says that YouTube's also looking to add in new advertising options which will enable brands to reach users who are viewing content that's more controversial, and may not adhere to brand safety rules.

"We’re also running experiments to help match content that could be considered edgy with advertising that fits their brand. As you know, yellow icons are a signal that only limited advertising can run on a particular video because of its content. We’re working to identify advertisers who are interested in edgier content, like a marketer looking to promote an R-rated movie, so we can match them with creators whose content fits their ads."

YouTube tightened up its brand controls last year after significant backlash related to ad placement alongside controversial content. Now YouTube's looking to build more options to improve its capacity in this respect, which may open up more opportunities.

Wojcicki​ also notes that YouTube will look to expand its Self-Certification pilot to more creators in 2020, while it's also working on improvements to its harassment guidelines and the ways in which it gathers data from and children's content​.

Interestingly, YouTube has also now started to roll out its new labels on state-backed media uploads, another area where the platform is looking to improve transparency. 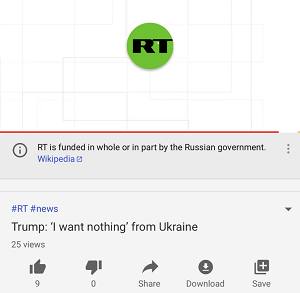 There are some interesting updates here, detailing how YouTube is working to improve its systems and create a more effective, engaging space for creators and users alike. And there's a lot to like about its creator eco-system. While other digital platforms are working to tap into the rose of online video, the maturity of YouTube's monetization program puts it a step ahead, which will likely see it continue to attract and retain top creators - and consequently, slow the expansion of alternative options.