Hype vs Reality: Should Your Brand be Utilizing Live-Streaming?

Everyone's talking about live-streaming these days. From Meerkat bursting onto the scene at SXSW, to Periscope's anticipated release shortly after, and more recently, the rise of Blab.im, live-streaming has emerged as one of the key trends in social media and digital marketing, and one that's growing strong. Last month, Periscope revealed it how has more than 10 million user accounts watching the equivalent of 40 years worth of video every day.

This was the first release of any official numbers from Periscope (Meerkat still hasn't released any audience data) and they took the opportunity to highlight the number that matters most to them, being time watched per day.

This number is a more accurate representation of the success of the platform, Periscope says.

"Time watched serves as a proxy for active user growth, without suffering some of the limitations of focusing exclusively on a metric like Daily Active Users (DAU) or Monthly Active Users (MAU). Although it's useful for us to see that our DAU graph is trending upwards, we don't think it's the most important metric for assessing our overall success."

And they're right, time watched is a more accurate way to measure the overall success of live-streaming, but there is one other, important stat that they've missed out, one which, I think, represents a significant aspect of live-streaming that may be being clouded by the overall hype and popularity of the new form.

Islands in the Stream

The thing is, live-streaming is not for everyone. For some people is presents an amazing opportunity, a way to broadcast their message and reach a wider audience, utilizing the trend of video content and the connectivity of social networks to full effect. But for others, the thought of projecting themselves via video is not so appealing. And while there are some live-streamers who are seeing amazing success and achieving great things via this new option, the use of live-streaming, in a brand content sense, is actually somewhat limited.

As with individual broadcasters, there are some brands who are doing great things with live-streaming - Applebees recently ran a multi-location celebration, all connected via Periscope, Discovery partnered with Meerkat to offer behind the scenes content for Shark Week. The opportunity for added insight, and particularly audience interaction, is there, no doubt - live-streaming offers unprecedented, real-time access which can be a massive draw. But in most cases, for brands, a more preferable option would be to create a video that you can edit and polish, as opposed to streaming with no filter. Even just using Instagram or Twitter video offers more control in this regard, and can be communicated in almost the same amount of time.

The thing is that, despite the hype, live-streaming won't work for every person and every brand. And this leads me to the number that I felt was missing from Periscope's figures - how many people are actually broadcasting content via Periscope every day, as opposed to just watching - i.e. being active on the platform? Personally, my social feeds are flooded with notifications of live-streams, yet they mostly come from the same users repeatedly. The question I have is, among those 10 million users, how many people are actually creating content? That would go a long way to highlighting the popularity of live-streaming as a form, as opposed to a broadcast channel.

To determine actual broadcaster numbers for Periscope, I first asked Periscope themselves. Unsurprisingly, I got no response. No matter, even without official data, I can still use the tools available online to determine, approximately, how many Periscope users are broadcasting, as opposed to just viewing streams.

To do this, I used Twitter search app Topsy to find the total tweets linking back to Periscope over the last month.

Whenever a Periscope user creates a new stream, they have the option to either make their broadcast private, limit their chat to specific users or Tweet out a link to their stream. Given the participatory nature of streaming, you'd think the majority of Periscope streams would be tweeted out, so the total amount of links back to Periscope would be largely reflective of the total amount of streams being created. But then, of course, people re-tweet those links to share them further and get more people involved - you can eliminate these by removing re-tweets from the total numbers (as I've done above with the "-rt" command). So in the end, according to Topsy, there 1,667,948 original Periscope streams tweeted out over the course of the last month, at an average of 53,805 per day. That's a lot of streams.

So, if there are 1.9m users on the platform each day, and 53,805 Periscope streams being created, that equates to just 2.83% of their user base being actual, active broadcasters, with the other 97% watching.

As noted, you could assume that maybe there's a proportion of streamers who are also broadcasting in private or to limited audiences, but even if they made up double the amount of streams posted publicly, that's still less than 6% of DAUs who are actually creating live-stream content. Also, as noted from my experience, many people who are streaming are doing so more than once per day, so when you take into account repeat broadcasters, that 2.83% may actually be even lower.

Of course, this doesn't factor in other live-streaming options - for comparison, there were 149,000 tweets linking back to Meerkat in the same period. It's impossible to use this as a measure of active broadcasters as we don't have Meerkat's DAU figures to measure against, and their recent integration with Facebook means there could also be broadcasts communicated via Facebook that can't be included, which would cloud the stats. Either way, it's 149k Twitter links back to Meerkat as opposed to 2.4 million links back to Periscope - it's clear that Periscope has the bigger audience at this stage, and is therefore more reflective of the total result. The same goes for Blab.im - that platform has only recently started to gain traction, and there were only 31k Twitter links back to Blab in the chosen period.

So while live-streaming is generating a heap of attention, and dominating a significant proportion of the overall social media and digital marketing discussion, less than 3% of people active on live-streaming platforms are actually broadcasting any content. The vast majority of their audience is exactly that - audience, looking on.

The reason then that live-streaming is generating so much hype and attention, I think, comes down to the principles of the majority illusion in social networks. Earlier this year, researchers from the University of Southern California produced a report on the majority illusion, which can make things appear more popular than they actually are due to the make-up of online networks. 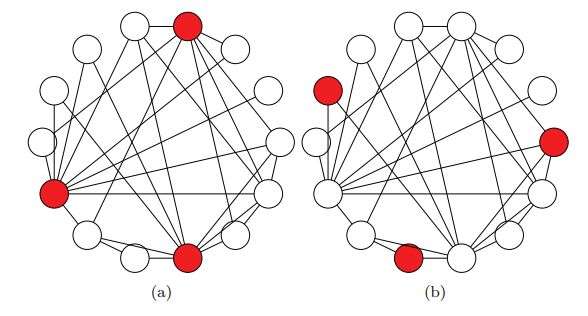 "The illusion comes about, due to just a few nodes (people) having links to a lot of others - as exemplified in this illustration of two views of a simple 14-node network, the only difference between them is that different nodes have been colored red. In one view, nodes with multiple links have been colored, in the other, those with just a few links have been colored. The researchers then suggest the viewer consider the perspective of nodes that are not colored, under the first scenario - any of them will see whatever message is being given by one of the more popular (red) nodes - and that is where the illusion occurs. In the real world, it appears possible that such networks would allow something to seem much more popular than it really is, because it is being disseminated by just a few well-connected nodes, whether it is a video of a cat doing something stupid, or a minority opinion about a well known topic."

In essence, the fact that live-streaming is being most highly utilized by well-connected, influential social media users is making it appear as if everyone, everywhere, is live-streaming. But they're not. In fact, the numbers show that hardly anyone is actually broadcasting content. Despite it appearing to be the thing, the one trend that all digital marketers and social media players should be aware of and utilizing wherever they can, it may be that its popularity is an illusion, and one which may not be as ubiquitous as perception would suggest.

That's not to say that live-streaming is not a medium that's rife with opportunity. It absolutely is. All new networks and apps are, they provide us with new ways to reach our audience, new mediums to consider in our wider outreach efforts. Any social media marketer worth his salt knows that you should always consider the opportunities and options afforded by any new offering - there may be ways to use these forms to enable better connection with your audience and generate interest and engagement around your products and services. Don't get me wrong, all brands should be considering how they might be able to use live-streaming in their wider social marketing mix, some businesses and individuals are seeing amazing results. In certain respects, these numbers work to underline this - if there's 1.9m viewers each day and only a small amount of content being created, that means the chances of your live-stream content being viewed are pretty high, and there's clearly an audience there.

But at the same time, it's not for everyone. If you don't see the potential for your business in live-streaming, if you're not feeling it when you open up a live stream and it's just you staring down the barrel of the camera, then you don't have to jump onto this trend. The key point here is that while live-streaming can be powerful, the hype and noise around the form may also have you thinking that you need to get on it, that you need to be live-streaming in order to keep up. That's not true. Live-streaming will work for some but not for others - if it's not for you, if you can't see it working for what you're seeking to achieve via your social presence, there are plenty of other options available. Not everyone is live-streaming.

While you should always consider the opportunities offered by all platforms, apps and additions, doing them well is far more important than simply doing them. Offering something engaging and interesting for your audience is what you should be aiming for - the only true rule in social media marketing is that 'your audience rules'. Live-streaming can be powerful, but it can also fall flat - as evidenced by the numbers, only a few users are broadcasting consistently.

Consider your focus goals, your audience, consider what opportunities the medium provides. Then make a call based on the opportunities afforded, not on what (it seems like) everyone else is doing.