This one feels a little uncomfortable.

Ahead of Valentine's Day, Facebook has released a new research report which provides insights to help marketers reach people who've recently broken up with a partner.

Yep, you read that right.

"We wanted to know more about what it means for people to end a relationship in the digital age. As part of our Moments That Matter series, Facebook IQ explored how the break-up moment influenced the online behaviors of people across France, the Netherlands, Poland, the United Arab Emirates and the United Kingdom who indicated on Facebook that they recently went through a break up.

While we did find some broken hearts, we mostly discovered that people use this moment to lean on friends and family and, perhaps most importantly, reconnect with what matters to them."

As I say, it's a little uncomfortable. Breaking up is a natural part of most people's lives, of course, and it is a significant moment, so there is, probably, opportunity there. But even using the word "opportunity" feels not quite right.

First off, Facebook reports that people who've gone through a break-up - as denoted by changing their status from "In a relationship" to "Single" - are generally more active on Facebook.

Newly single Facebook users are also more likely to be heading out to events.

This is pretty logical, right? People who've just broken up have more time on their hands so they look to social for support, and they want to get out of the house rather than sitting around dwelling on the past - or to get started on their next chapter.

Facebook's researchers also found that men start posting about their emotional recovery from a break-up earlier than women do, using terms like "healing," "detox," "drowning sorrows," "binge watching" and "suffering" in their posts before they mark themselves "Single".

Facebook also conducted wider research on the words used by newly single users on the day they announced their break-up.

Facebook notes that many of the sentiments expressed are positive, which could be a trigger to help you reach these users at the right time with new offers.

And that then leads into the final point of Facebook's break-up research - newly single people see a 25% increase in travel-related purchases in the month following their announcement. 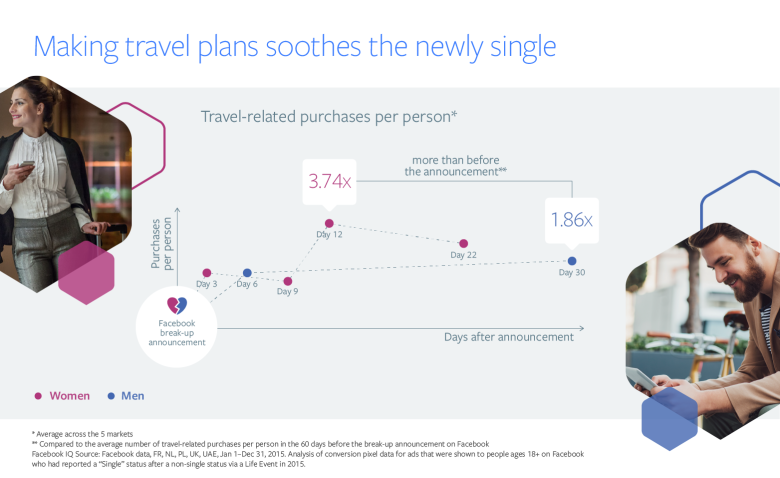 Facebook also notes that newly single users were significantly more likely to post about exercising and focusing on their health, as well as taking up new hobbies.

So, cool, right? Doesn't feel like emotional manipulation to target users at a time when they're most vulnerable. Not at all.

As Facebook notes, their intention with this research is to help brands understand ways they can benefit by offering messages of empathy and new experiences, which is a more positive angle. But then again, they do note things like this:

"Whether people are binge-watching on the couch, scrolling through their feeds or exploring new places, mobile is where you will have the best opportunity to reach them."

The note of "binge-watching" evokes a very sad image, it doesn't seem like quite the right time to be working to reach these people with your marketing message.

But still, the data is what it is - most of the findings seem fairly obvious, and it may be better to avoid targeting people at this vulnerable stage of their lives.

Make of it what you will.

You can read the full "What Mends a Broken Heart on Facebook" report here.