How Tasty Gets Billions of Facebook Video Views: 6 Secrets Any Business Can Use

Even if you've never liked Tasty, the Buzzfeed-owned food brand on Facebook or any other social channel, chances are you will have been exposed to one of its posts, and be familiar with its output. Since launching in 2015, its presence has exploded. Here's a few recent stats:

Like Tasty's video setup, the thinking behind its social media strategy is deceptively simple. Of course, not every brand will have the resources to pump out videos daily or promote them with high-budget ads, but in this post, I'll show you - by studying Tasty's output on Facebook and quoting the people directly behind Tasty's success - you can take that same ingenious strategy and apply it to your own business, whatever industry you are in.

It's not just the subject matter - delicious food - that attracts people to Tasty. There's something extra that draws viewers in - empathy, showing an understanding of what its fans crave. Tasty's videos are nothing like the idealized cooking shows that big television networks produce. Instead, they're simple, no-fuss, top-down instructional videos that viewers actually want to try to cook themselves.

Frank Cooper, Buzzfeed's chief marketing officer calls empathy the "ultimate brand-building superpower." In order for a fan to grow to love a brand, that brand has to show that it cares for its fans first.

"[Tasty videos] tap into a simple truth: People love tasty foods and the kind of foods that remind them of their childhood, comfort food, or food that reminds them of an experience."

Key takeaway: Produce content that speaks to to your audience with an empathetic voice: target their needs and desires, and show that you appreciate them. 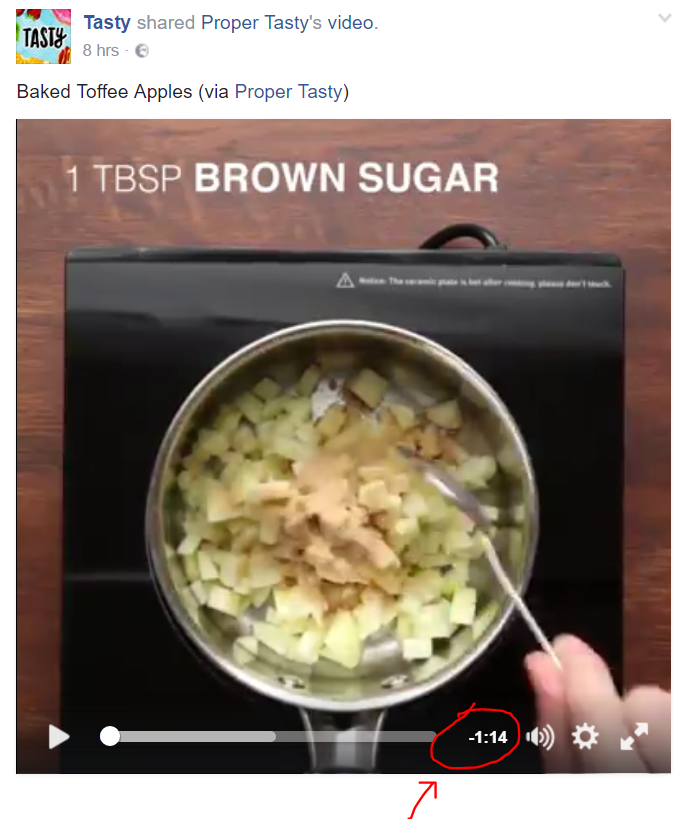 One of the key considerations for Tasty is shooting videos that are captivating from the beginning, and easily understood without sound. These strategies take into account two fundamental features of videos in the Facebook News Feed: videos play automatically when a user scrolls onto them, and they're also muted unless the user turns on sound.

Tasty videos have no branded intros and recipe instructions start immediately, accompanied by captions to show the ingredients.

"We were really thinking of audio independence. What kind of videos would work seamlessly within a product like that and allow you share with your friends?" - quote from Ze Frank, president of BuzzFeed Motion Pictures.

Another important element of Tasty's videos is their length - most are no longer than a minute or two. The success of short videos emphasizes the extent to which convenience and mobile accessibility have become the norm. Shorter clips load faster, are are more digestible when people are on the move.

"Consumers don't seek out content, rather they expect it to be readily available to them and for it to delight them almost immediately, wherever they are." - quote from Simon Low, BuzzFeed's Director of Brand Partnerships.

Key takeaway: Optimize your video content in way that captures the attention of your audience on your platform of choice.

3. Videos that play to Facebook's algorithm 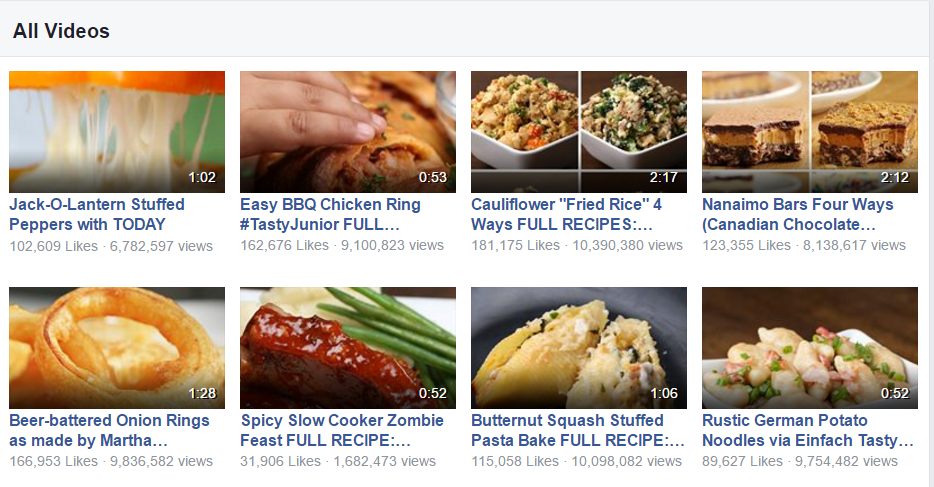 The launch of Tasty marked one of Buzzfeed's earliest trials of hosting content direct to a social network, rather than posting links to drive people back to stories on Buzzfeed.com. This strategy is still unusual because - at the time of writing - BuzzFeed are not gaining direct ad revenue from Facebook video, though there are alternate money-making opportunities to be had, but more on that later.

"We have to go where the time is spent. You can create the content yourself or work with a partner and they can amplify it" - quote by George Hammer, senior VP of Digitas Studios, who has worked with BuzzFeed for a number of clients.

However, there are integral benefits in uploading videos direct to Facebook. Facebook's News Feed algorithm tends to favor anything that keeps people on Facebook longer, rather than sending them away to another site - meaning Tasty videos hosted on Facebook are more likely to be treated better than links back to Buzzfeed. Also, the greater the level of engagement (watch time, likes, comments, shares), the more likely Facebook is to show content to other fans.

There are a mixture of links and direct-upload videos on Tasty's Facebook Page nowadays and it stands to reason that the popularity and engagement rates for its videos will have a positive knock-on effect to the reach of future link posts.

Key takeaway: Platform-specific content will pack more of a punch than a "one size fits all" approach. If you don't have the budget or resources to go 100% everywhere you need to be, focus on the platform best suited to your brand and audience.

Tasty's explosion in popularity highlights another lesson for all marketers: niche content can be just as successful as videos made for the masses. In addition to Tasty, Buzzfeed has launched similarly successful Facebook Pages including Proper Tasty (British food), Tasty Demais (aimed at Brazilians), Nifty (craft videos), and Goodful (personal health and wellness).

And you only have to look at the titles of a recent selection of Buzzfeed's website articles to see how it consistently targets niche audiences with its written posts:

"We've looked at niche audiences and very specific topics and it spreads from there. It's counterintuitive, but it's been a much more powerful impetus for sharing, as opposed to a spray-and-pray approach." - Frank Cooper.

Key takeaway: If you neglect to develop niches, your content will be too general to connect with your target audience. 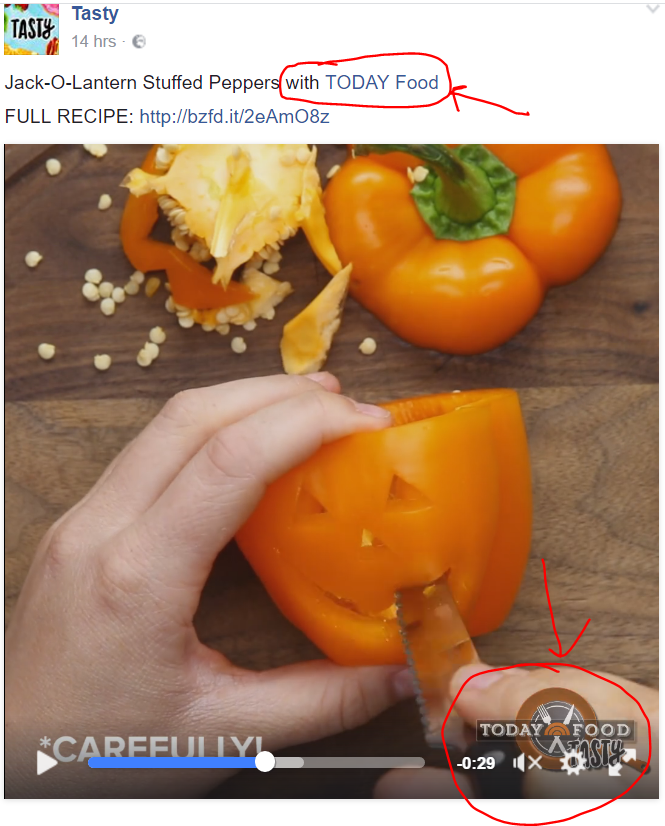 Tasty's recipe videos obviously don't plug a specific product or service - and they don't make money from ads - so how do they generate revenue? Through sponsorship - incorporating ingredients from other brands. Here's how it works so well:

"We aren't providing pre-roll or banner placements, but instead, we're putting forward a more nuanced offering, incorporating brand products into Proper Tasty videos in a natural way that isn't jarring for the consumer. It's a lighter approach to branding but one that's seeing huge levels of brand engagement and audience interaction - we can actually see consumer's purchase intent in the comments that they write and in the re-creation of recipes that they share back with us or the brand." - Simon Low, Buzzfeed's Director of Brand Partnerships.

Key takeaway: Your content doesn't have to promote your business or service directly in order to contribute towards overall business goals. Publishing posts that are entertaining, useful, and shareable is a surefire way of spreading the name and positive reputation of your brand, and to generate interest.

Here are a few other little tips and strategies Tasty uses to eke out as much engagement from its audience as possible: 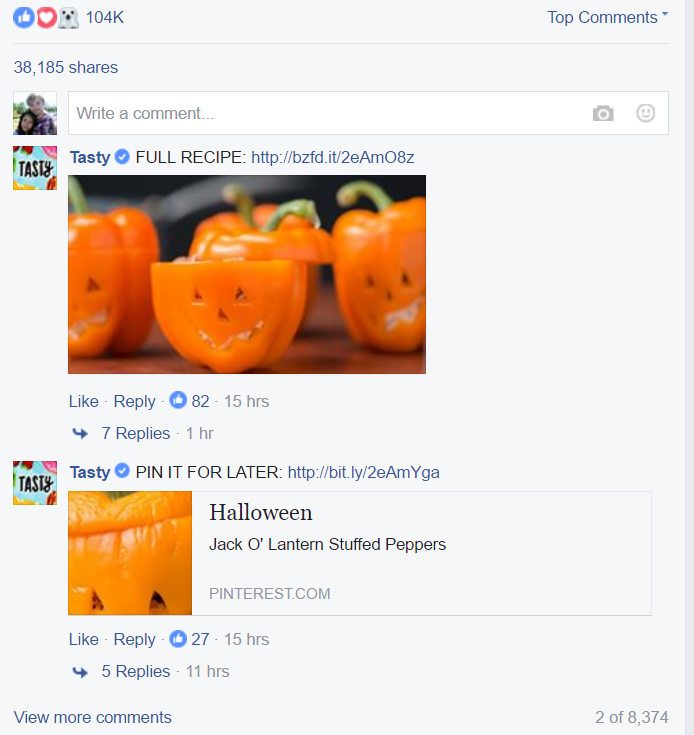 The prime focus of its video posts are, obviously, the videos, but Tasty makes sure to cater to those who either don't have time to watch the clip, or prefer to digest the content in other ways. It does this by commenting on its own posts with "Pin it for Later" and "View full recipe" links. These two comments often become the post's Top Comments, which ensures they appear at the top of the comments feed for everyone to see.

In some cases, Tasty will even paste the whole recipe as text into a comment, keeping people on Facebook. 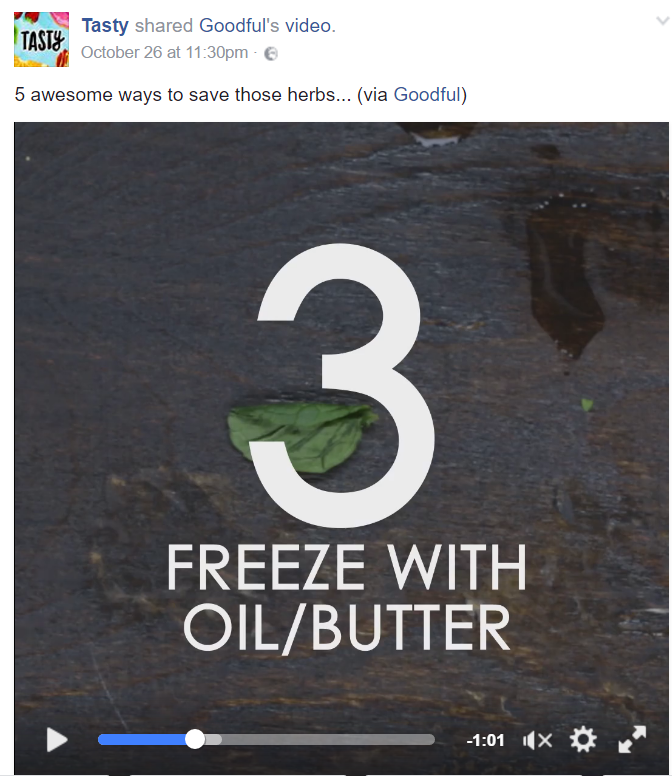 And as a way to spread awareness of its related food and lifestyle Pages, Tasty often cross-promotes by uploading another Page's video to Tasty and linking to it in the caption.

What do you think about Tasty's content strategy? Will you take any of the ideas above and apply them to your own brand?