Twitter has reported its 2016 Q4 results, showing an increase of two million monthly active users, but a decrease in year-over-year advertising revenue.

First off, on active users, Twitter continued to slowly add to their audience, rising from 317 million monthly actives in Q3 to 319 million in Q4. 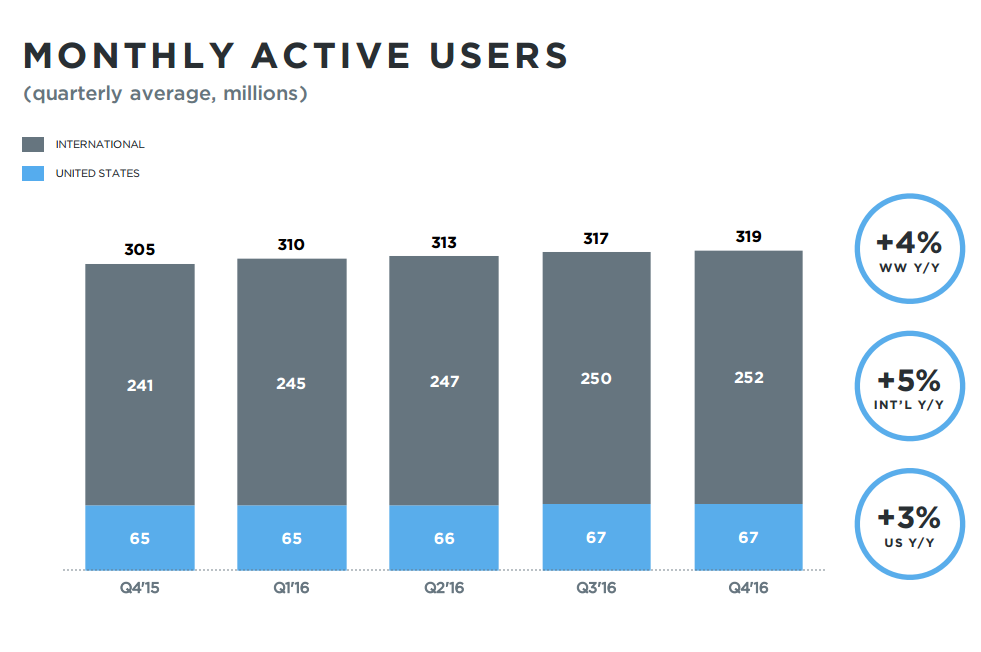 That's its slowest MAU growth in a year - and there was no growth at all in the U.S. for the quarter.

Growth has obviously been a struggle for the platform, but Twitter is keen to note that Daily Active Users have grown 11% year-on-year, up from 7% in Q3. 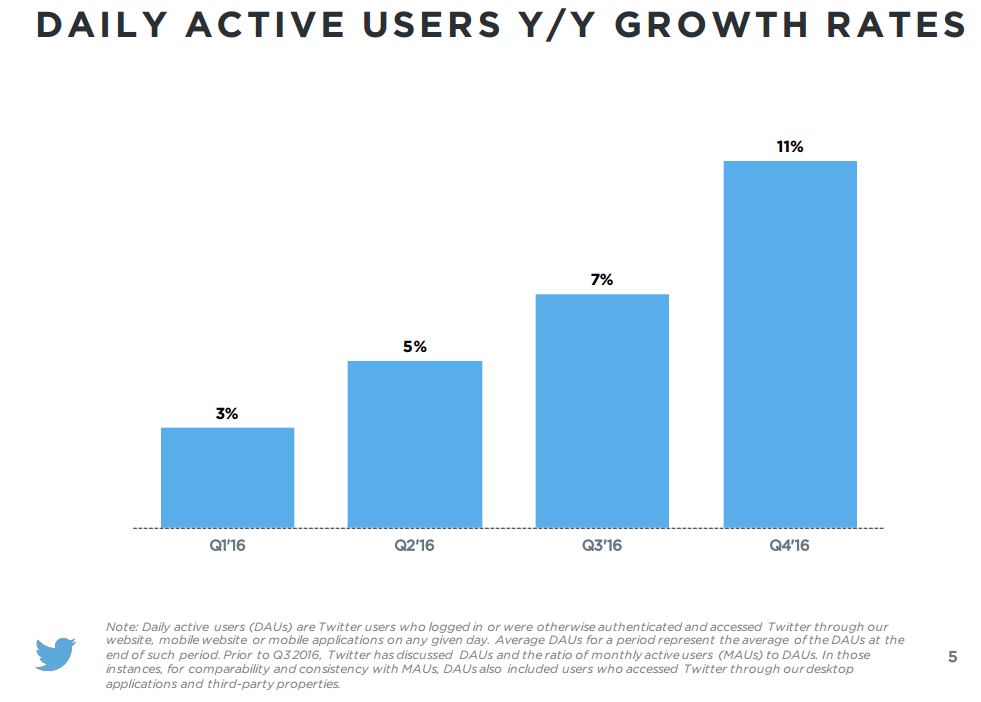 It's slow going, but it is growth.

So what's driving those increases?

Your first instinct might be Donald Trump - the President's affection for tweeting has seen the platform become the go-to resource for insight into the mind of the new leader, who's even announcing policy decisions within 140 characters.

So is Trump's presence on Twitter good or bad for the platform? Are people coming to see what he says next, or leaving because of the same?

Twitter's CFO Anthony Noto says having a tweeting President definitely has its benefits.

"I would say is that the President's use of Twitter has broadened the awareness of how the platform can be used, and it shows the power of Twitter."

Noto says that the President's tweets spark discussion on the platform, but his Trump's active presence alone was not the key driver of daily active growth.

"In the fourth quarter, the primary drivers of our growth were product changes and marketing."

Those product changes include the addition of new algorithms and systems to make Twitter more individually relevant. Many of those updates have been fairly subtle - you might now see a tweet that someone you follow liked within your feed, you might notice that the tweets you see are a little more out of chronological order. Push notifications are becoming more focused on happening events.

Machine learning is critical for us to better identify & personalize content that people want to see & deliver it to them, faster. #TWTR

The wording here is important - machine learning is now seen as a 'critical' element of the Twitter process. While once, Twitter was simply a real-time stream of what was happening at any given time, the company is slowly moving towards a more algorithm-defined feed to improve engagement.

They're not making any big, sudden changes on this front - they found out the first time they announced an algorithm that Twitter users are somewhat resistant to wide scale change. But they are implementing small refinements and fixes that are slowly changing the Twitter experience over time.

That slower implementation also means slower growth, but as you can see, they've doubled their daily active user growth rate in the last quarter. The algorithm shift is clearly having some effect.

To build on this progress, we plan to apply machine learning more broadly across our service in 2017. #TWTR

Also worth noting, Twitter has made specific note of their new Explore tab, which has replaced Moments in the app, saying that they plan on making Explore more personalized and relevant, which will be interesting to watch.

We intend to continue to integrate new, dynamic, and personalized content into the Explore experience this year. #TWTR

But while usage is slowly moving in the right direction, unfortunately, revenue is not. 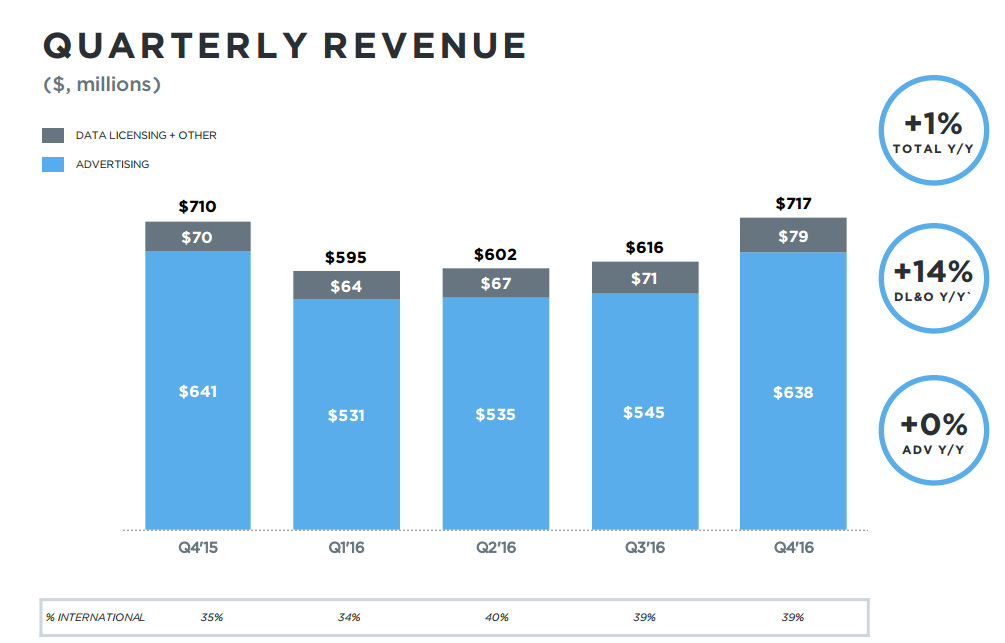 This is the side effect of slower growth and ongoing negative sentiment - up till now, Twitter has always been able to fall-back on its sustained revenue growth as a key measure to counter their slower user expansion. But now, revenue is also dropping - that goes hand-in-hand with their audience retention challenges, so it should also, theoretically, increase as the platform brings users back more often. But as audience growth is slower, so too will the shift back to better financial results, which is what Twitter's forewarning of here.

As previously stated, revenue growth will continue to lag audience growth in 2017. #TWTR

The majority of Twitter's revenue growth has come from international markets, and Twitter still likely has room to grow in this regard. 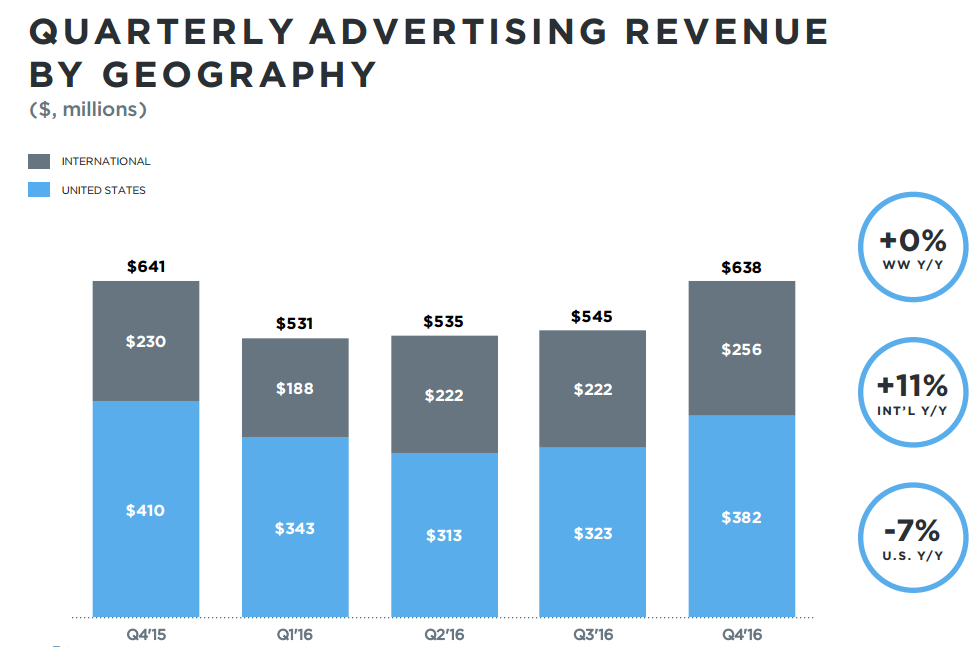 But as you can see, the local market still drives the majority of Twitter's revenue.

It is worth noting that overall Twitter has seen year-on-year revenue growth, and they're making strides in improving their data licensing revenue, which has long been a problem area for the company. 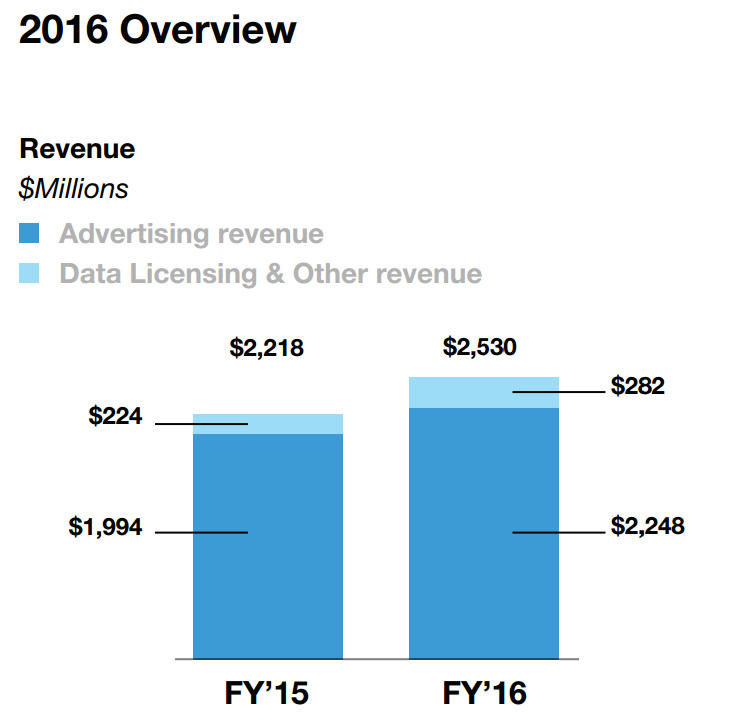 But the company reported a net loss of $457 million for the full financial year.

The revenue results and outlook saw shares in Twitter drop to their lowest levels in four months.

In terms of live-streaming - the platform's big focus for growth - Twitter reported that they streamed more than 600 hours of live video from content partners across 400 events in Q4, attracting 31M unique viewers. 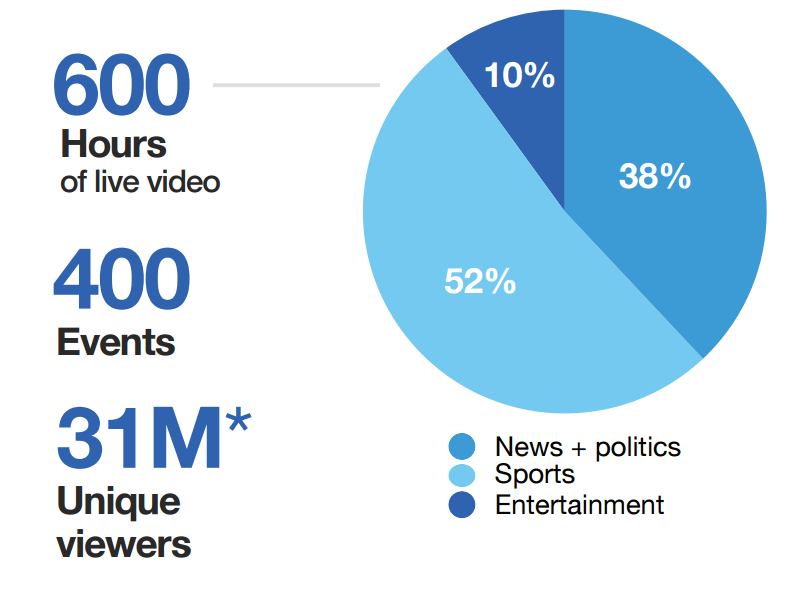 And importantly, the audience for those streams was primarily aged 25 and under, a key stat to underline the future opportunity of the option. 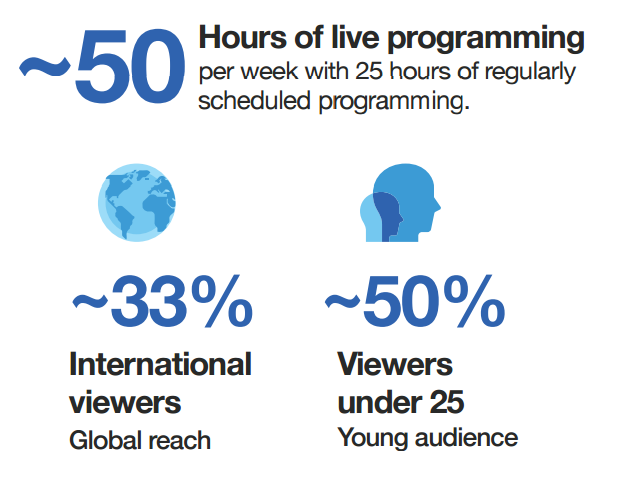 Twitter's NFL programming - which they signed a multi-million dollar deal for back in April - also brought in a lot of new viewers.

But evidently, Twitter hasn't yet been able to translate that attention into ad dollars.

Given the attention, it would seem that there is still significant potential there, Twitter hasn't fully realized their monetization programs for live content as yet, and having millions of engaged, young viewers could provide them with expanded opportunity on this front in future.

Twitter also noted that 6.6 million hours of live video were broadcast through Periscope in Q4.

It's a mixed report for Twitter, as most of their more recent financial reports have been. User growth remains slow, but it's still moving in the right direction, and there is clear logic behind why that's the case. Yet at the same time, the platform hasn't been able to convert the increased attention brought about by President Trump's tweeting habits into revenue opportunity, which remains a key concern.

There are positive signs, and it does feel like Twitter is finding its true calling and place in the market. But overall, the platform still has a long way to go.