A year ago, Twitter released a new video ad option called First View, which gives marketers the opportunity to ensure their Promoted Video will be the first ad their target audience sees when they log onto Twitter for the first time on any given day.

"First View's exclusive placement enables brands to achieve "Love at First View," getting attention at the top of the timeline when users are at their most receptive."

The logic behind First View is based, in part, on Twitter research which shows that "the first video seen in the timeline generates, on average, a 22% uplift across all metrics versus all subsequent videos viewed".

And while the pricing of such ads varies significantly, Twitter's looking to mark the anniversary by underlining the effectiveness of the offering with a new research report into why First View matters, and how marketers can capitalize on its impact.

First off, Twitter notes memory response is highest in the first 30 seconds of a Twitter session, with users increasingly more likely to connect emotionally with content early on. 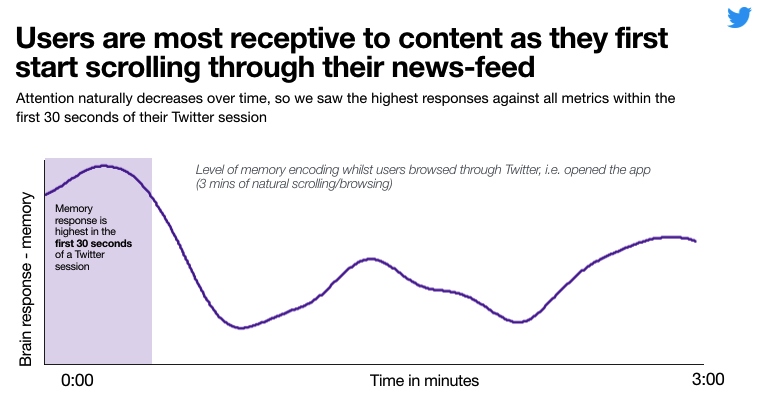 This is based on Twitter's own neurological research - and the logic makes sense, particularly given the transitory nature of tweets. Given this, that initial video slot can be extremely valuable - it's still on the marketer to come up with a relevant, resonant video message, but the prominent placement, as shown, can significantly boost impact.

Such stats also underline the importance of understanding when your audience is active on Twitter - even if you're not paying for First View placement, by studying your analytics you can get a better idea of when your audience is more active, which can help capitalize on this same effect organically.

In addition to this, Twitter's research has also shown that the first video people see on Twitter generates higher response than other activity on the platform.

Really, these first two charts say the same thing in a different way, though the additional mental breakdown does help underline the value of that First View slot.

Twitter's also reinforced their previously noted stats on engagement with video content in Tweets, saying that:

"Video Tweets are six times more likely to be shared than image Tweets, according to our research"

By extension - and based on other previous Twitter studies - this means that:

Valuable info to factor into your tweet process - and it comes direct from the source.

Also, if you hadn't heard, Twitter underlines that video is by far the most popular form of online content today.

"It's expected to be the fastest-growing content type on mobile and desktop through at least 2020, when it will account for more than 80% of all consumer internet traffic."

And the last key point Twitter makes about the effectiveness of First View relates to how the option helps improve performance on key brand metrics: 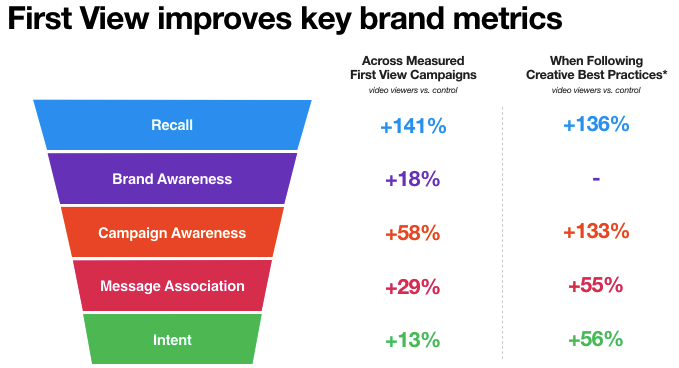 They're some interesting stats - maybe not hugely surprising or revelatory, but worth consideration nonetheless.

Of course, after taking this information in, and being sold on the potential of First View, the real question is around costs. As noted, the actual costs associated with First View vary significantly, so Twitter can't provide a definitive bracket for the option - they advise that any brands interested in the option should get in touch with their Twitter account team.

Twitter does provide some examples of businesses that have seen success with First View, and the brands highlighted are big spenders (Wendy's, Jaguar, Universal Pictures). As such, you can assume the option is priced at a premium - but even if you don't seek to use First View specifically, the data points here can, as mentioned, help you better align your own organic posting schedules to meet these heightened response points in order to boost your own strategies.

Twitter also notes that First View can be great for promoting live events, putting real-time video right at the top of people's timelines.

They're some interesting notes, and it's worth considering what the data means - both in relation to First View specifically, and in relation to wider platform strategies.