There were three social media related stories circulated over the last week which each introduced a different perspective on some of the platforms and functions that you already know and use. And while all three were relatively minor within themselves (at least, at this stage anyway), they are worth highlighting, as each helps expand the conversation and thinking around different aspects of social, and can help open your mind to different ways of looking at the latest developments and advances in the industry - which, in turn, can help keep you ahead of the curve and on top of not only what's happening now, but what's coming in future.

A leaked document uncovered by TechCrunch earlier this week revealed how Facebook is reportedly looking to introduce ad content to Messenger. The proposed system would put brands in touch with some prime ad real estate, enabling them to reach consumers direct on their mobile lock-screen - though there are some necessary provisos to how such capability might work. 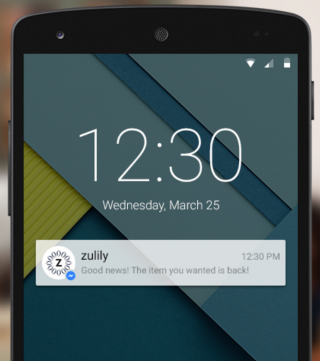 So let's say you initiate a conversation with a brand via Messenger - a process that's going to be made easier with the addition of new 'click to contact' Messenger functionality (i.e. all brands with a Facebook Page can, as of right now, use this link - fb.com/msg/[Insert Page name here] - to enable anyone to connect with them direct via Messenger - try it out with your Page, it's kinda' cool). Once you've had that initial brand/consumer interaction via message, that brand will then be able to send you ads in future, which you'll, of course, be able to opt out of if you should so choose.

The idea here is that Facebook will be negating spammers by restricting this capability only to brands which you've initiated contact with, thereby making those Messenger ads more relevant and applicable. Now, how that system would actually work, in practicality, seems a little unclear at this stage - for example, if someone gets in touch with a Page with via Messenger, you can respond, whether it's straight away or days or months later. Given that, how Facebook plans to monetize this process I'm not sure - if I can already message those people who've messaged me, why would I need to pay for an ad to reach them? Scale is likely the key issue, and Facebook's Messenger ads will give you the option to pay to reach large numbers of those people who've previously got in touch (and, hopefully, based on some level of previous context).

Details aside, Josh Constine at TechCrunch suggested several ways in which this new option could be utilized.

Make no mistake, delivering ads direct to peoples' lock screen is a big deal, and our existing relationship with messages (the messages you receive are generally from your friends and people important to you) will also help boost engagement rates.

It's an interesting offering to consider, a new way to think about how messages can better connect you with your audience - threaded conversations will ensure you can keep track of all your past interactions with each consumer, while you'll also have access to direct, personal connection, via an app which a growing number of people are using.

Worth considering how your brand might be able to use this - or even start using the 'click to contact' Messenger link now to initiative conversations ahead of the coming ad roll-out.

A report was published by The Wall Street Journal this week which noted that Twitter now has more users than Facebook in Japan. Twitter says it has more than 35 million active users in the country, while Facebook has around 25 million. It's a small victory, but given Twitter's recent struggles, they'll no doubt take what they can get.

But that wasn't the interesting part - what was most notable in this report was that Twitter's user base surged in Japan following an earthquake and tsunami that hit the nation's northeast back in 2011. In the midst of the crisis, Japanese people turned to Twitter for news, once again underlining the platform's strength as a leader in real-time news and conversation - before that event, Twitter had less than seven million users in the nation.

This seems like the sort of story Twitter really should be highlighting - Twitter's often used as the key platform for rapid communication and dissemination, and has proven especially useful in times of crisis. In fact, right now, Twitter's being used in Jakarta to help emergency relief workers stay on top of floods.

That emphasis on real-time, up-to-the-minute, simple communication is where Twitter has an advantage over other networks, and will likely continue to maintain that differentiation, as no other platform is as open and easy to use for such a purpose.

A big part of Twitter's current challenges is that it's data is all out there - it's difficult for the platform to capitalize on the value of their audience insights and information the way Facebook and LinkedIn can because all their information is available for everyone to see and to use for their own purposes. But the counter to that is Twitter has greater capacity to connect people to wider conversations, an element the platform has been looking to highlight with products like 'Mentions', though thus far those efforts have largely fallen flat.

This is the kind of news story Twitter should be focusing on, showcasing the value the platform has in our everyday lives - whether those days be ordinary or struck by a sudden crisis. Not everyone cares about the World Series or the Super Bowl, but everyone can benefit from real-time updates which are relevant to them, in their region. That kind of personalization, highlighting the value of Twitter's real-time, all encompassing network and conversations, and how they can be used for the greater good of all, could be a great way to get more people to see the value of the platform, and participate as a result.

The Science of Sleep

Did you know that you can use Facebook data to track the sleep patterns of your friends? Okay, that might sound creepy - and it kind of is - but the project itself highlights another interesting way of examining and utilizing social data.

Fellow Aussie and coding enthusiast Alexander Hogue published a post this week which outlined how he'd worked out a way to track when his friends were active on Facebook - and given an increasing number of us check Facebook before we go to bed and first thing in the morning, those data points actually provide a fairly accurate measurement of each users' sleep patterns. 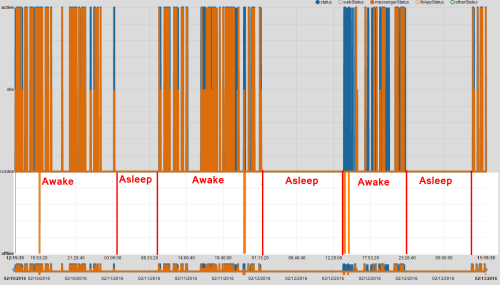 Hogue's process essentially works out when that little green dot next to a person's name on your Facebook sidebar is active, information which is available to every user about every person they're connected to. In itself, of course, that data doesn't provide a heap of value, other than giving you the ability to freak people out ("why were you up till 3am last night?"). But in a broader sense, the project once again highlights the ways in which our expanding online habits can reveal more about who we are, how we live and what we do.

From a more practical perspective, what if your employer was able to track your sleeping patterns and attribute them to productivity and performance? What if your insurer could do the same? The reality is, this type of data is readily available and will be used for such purposes in the very near future - if it's not already.

What's of particular interest in this project is that it's so simple - it's not using biometric devices or body scanning wearables. While those types of tools are only going to become more prominent, the fact of the matter is that even without them, even without your conscious understanding of what information you're readily providing, the capacity to build an accurate data profile of your life is becoming ever more simple. Think about what else your social media activity could reveal or what you might be able to work out, based on those simple, commonplace, online interactions. They're all being tracked, they're all traceable. And they can provide some amazing insights into how we live.

As noted, each of these projects and/or announcements is interesting in that they open up a different way of thinking about how we're using these systems, and what else we might be able to do with them. In themselves, each of these stories is interesting, but their wider context and relationship to potential new ways to utilize social platforms and digital data is what's worth real consideration here. There's so much capacity in these elements that we've not yet fully explored, it's a whole new world, and we're only just starting to see the possibilities of the next stages of digital transformation and its effects on out day-to-day existence.

It's worth considering how these system can help - your brand, your understanding and your experience of life in general.