Facebook is always testing out new stuff - from alternate news feeds, to new formats for how content is presented. Given the constantly evolving nature of social, there are always smaller tests and tweaks being trialed amongst different user subsets - in fact, it's almost unlikely that your Facebook experience is exactly the same as what your friends are seeing.

And while not all of these tests and trials will ever come to fruition, it is interesting to note where Facebook's looking, what they're trying out, and considering what that might mean for the future of the platform and how they're seeking to encourage engagement.

To keep you up to speed on these, we're tracking of all the smaller tests and updates seen 'in the wild' and compiling them into weekly updates to help provide some perspective on Facebook's experiments.

Here's the latest summary of Facebook tests - starting with a new patent which could see Facebook scanning your face to measure your responses.

This one was reported by The Sun in the UK earlier this month - apparently, Facebook has filed a patent which "spies on people and automatically analyzes their facial expressions" via their phone camera. 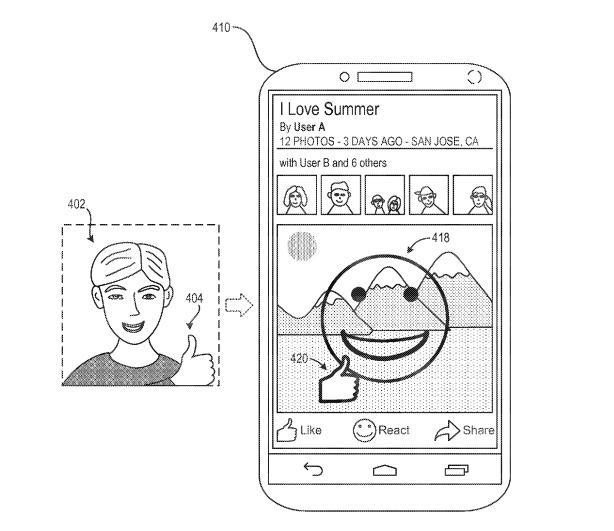 Though, on looking at the data, that seems to be only partially true. The patent itself does imply that Facebook could use your phone's camera to detect your emotion, then use that as a means to serve you more related content - i.e. if Facebook detects that you're smiling while reading a post, it could be used as an algorithm factor along with their various other data points. But the implication of the design suggests that this would be more of a voluntary action than a secretive one.

Either way, it's still interesting to note how Facebook is considering using physical actions within its response tracking. The patent was actually filed back in 2015, so it may have been dropped or adapted into their face filter-type tools (which seems to be implied in the above image). But it could also still be on the cards, pointing to a future where Facebook is tracking more of your real-world actions to deliver a more relevant user experience.

A little creepy, yes, but in application, maybe less so.

This is an interesting one - as Facebook continues to push into producing its own, TV-like video content, one of the key thresholds to the next stage of social platforms becoming genuine TV rivals lies in crossing over to the TV screen.

While more and more people are consuming video content on their phones and connected devices, TV still reigns supreme - if Facebook, Twitter and YouTube want to truly capture the TV market, they also need their content to be easily accessible on bigger screens.

All of the major platforms have already made strides in this regard, with their own TV apps (YouTube says watch time of YouTube content on TV screens has doubled in the past year). And now, Facebook is more actively looking to promote this, with prompts for users to watch Facebook Live content on the big screen.

Facebook is pushing people to watch live videos on the big screen (spotted in comments thread of a live video) pic.twitter.com/1tpODS2HKK

This is a smart move, raising awareness of the capacity to watch Facebook video content in larger format - which could especially come in handy for major sports events, where people are looking for a larger, more immersive, more communal viewing experience. Not everyone would be aware that this is even possible, so adding a little push within a happening live-stream could be a great way to boost awareness and get more people tuning in.

And it only takes one good experience to get people talking - once people know that can easily watch Facebook video on TV, that significantly increases the likelihood of them doing the same again, for different Facebook video content, in future.

In a related note, Facebook has also announced that Verified Pages will now be able to promote a Facebook Live video during the broadcast. Previously, live videos could only be promoted after the live broadcast ended.

Facebook's already knows all about you - what you like, what you do, what you're interested in. So it makes sense that Facebook could use that knowledge to help you find the perfect partner as well, right?

This seems to be the thinking behind another Facebook patent, which would see them build a dating service into the app.

"In March, Facebook was granted a patent for a system that would allow it to build a dating service into the site. The patent describes a way for Facebook to identify friends of friends who might be single, based on "other commonalities or shared experiences." When you see someone you like, Facebook would let you ask for an introduction." 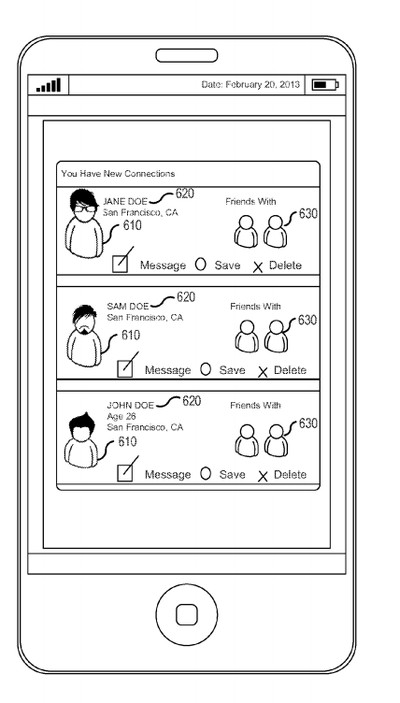 In some respects, this seems like a step too far - Facebook's already under constant scrutiny about how it handles user privacy and personal information. Wouldn't crossing over into match-making be really pushing those boundaries?

But on the other, as noted, it makes perfect sense - no other platform can create a more complete data profile of you, and match that against other profiles to see what works.

For example, Facebook could track how long people have been in relationships for, then use that as a measure of relationship success. It could then cross reference the various traits of all the users in a relationship in order to find commonalities, giving Facebook the perfect grounding for matching your personality traits with others who might suit - i.e. people with your behavioral leanings and interests, when matched with people with these corresponding traits, have, say, an 86% chance of establishing a lasting relationship.

Really, no other dating platform could come close on this - Facebook has more data on more people than any other platform in history.

It could be a bit creepy, but it could absolutely work.

In what would be welcome news for publishers, The Wall Street Journal has reported that Facebook is building a feature which would enable users to subscribe to publishers direct from the mobile app.

Facebook doesn't haven't a great track record in working to help publishers monetize their content, and as such, the announcement is definitely being viewed with some scepticism, but the idea would be that Facebook could win by remaining the platform of choice, and that publishers could win by using Facebook to build direct connection with their audience - as opposed to merely reaching them through Facebook's delivery platform, where Facebook holds all the cards.

Facebook's been working to provide more mechanisms for publishers to make better use of their huge reach - recently, for example, Facebook introduced call to action units within Instant Articles, which provide another way for publishers to establish direct connections with readers.

But the constant algorithm shifts and Page reach declines have left many weary of Zuck and Co's changes. A new subscription model would be a welcome addition - though much depends on the exact process and how it will be facilitated within Facebook's system.

And the last interesting test seen 'in the wild' this week is a new way to present Likes in real-time, with floating profile bubbles coming up on screen as the Likes come in, showing you who's engaging with the content. 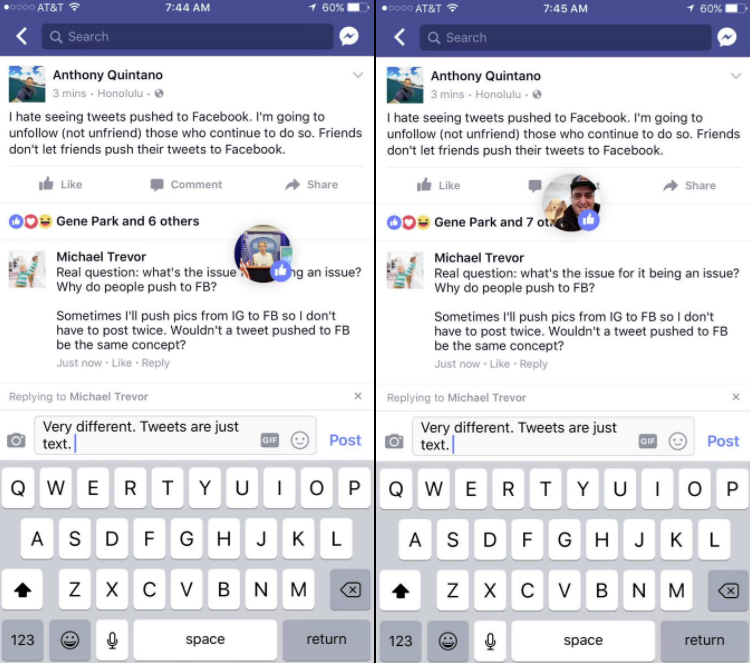 The test was spotted by Anthony Quintano, and immediately reminded me of one of Twitter's latest changes, which sees tweet activity flow through in real-time.

It's an interesting option, for sure, but not sure how welcome it will be - or how much it adds to the Facebook experience. On Twitter, real-time is what the platform is all about, so it makes sense to have the constant stream feeding in. But on Facebook, it feels a little less relevant. Sure, seeing that other people are also reacting to the same post is interesting, but it could be distracting when you're trying to compose a reply - see someone you know pop up and you could be compelled to go check out what they wrote, de-railing your train of thought.

But then again, maybe it works. It seems to be a fairly limited test at this stage.