Things are always changing at Facebook - just when you think you've worked out an optimal strategy, they switch it up and your audience reach charts start inching downward, leaving you scrambling to catch up.

It's interesting to note these changes, and how Page admins work to deal with them - like, for example, the recent trend of Pages working with Facebook's emphasis on video without actually creating video.

How do they do this? Check this out:

These are static images, both converted into videos. Clever, right? Well, kind of. No doubt it won't take Facebook long to crack down on these and reduce their reach.

But aside from 'hacks', there are always tests and updates being conducted across Facebook - there are so many variations of Facebook running at any one time that the version you see is likely very different from that which your friend is using.

To help keep you updated on the latest, here are five tests and/or new features spotted on Facebook this week.

1. You Can Upload GIFs Direct

Yes, you can finally upload GIFs to Facebook direct.

The news was so big, even the UK Prime Minister retweeted the above tweet.

Facebook's been easing its long standing opposition to GIFs of late, allowing them into ads, and more recently in comments, but this is a new option which they've quietly pushed through. You have, of course, been able to upload GIFs via third party platform links for some time, and some users have even reported being able to upload them directly like this for a few weeks, but it now seems like everyone has access.

It does appear, however, that you can only upload GIFs natively via desktop, not mobile.

To upload a GIF, all you have to do is click on the photo/video post option, then attach a GIF. You'll get a notification that Facebook is processing your video, which takes a few seconds, then it'll be up, and it'll autoloop in the News Feed like any other GIF. You can also upload big files - I added a 20MB GIF to push it and it went through fine (note: the limit on Twitter GIFs is 15MB). But then again, given Facebook's preferential treatment of video, you're probably better off uploading a video than a large GIF.

Facebook's also testing a new option which would enable users to display the Facebook Pages they manage in their profile bio notes.

It seems like the benefits of this addition would be minimal - while it would provide a more direct way to connect people through to the Pages you manage, which could help add context to who you are and what you do, that functionality wouldn't be add huge benefit for most.

But then again, there could be a vanity element - many Page admins would take some level of pride in listing the Pages they're in charge of, and it might help drive additional traffic. It could provide more benefit than it seems.

No word on a wider roll out at this stage.

We reported on this one last week within the context of Facebook's most recent News Feed algorithm update, but it's worthy of its own mention.

Back in April, Facebook announced that as part of its ongoing effort to crack down on spam and fake news, it would be removing the ability for Page admins to edit the preview text, headlines and images on link preview posts.

For those unaware, when you post a link on Facebook, you can edit all of these elements to customize it to the Facebook audience - you might have included an image that's not optimized for Facebook on the original post, or have used a headline that's intended for SEO, when you know a different format would perform better on FB. Right now, you can edit all of these features as you post. 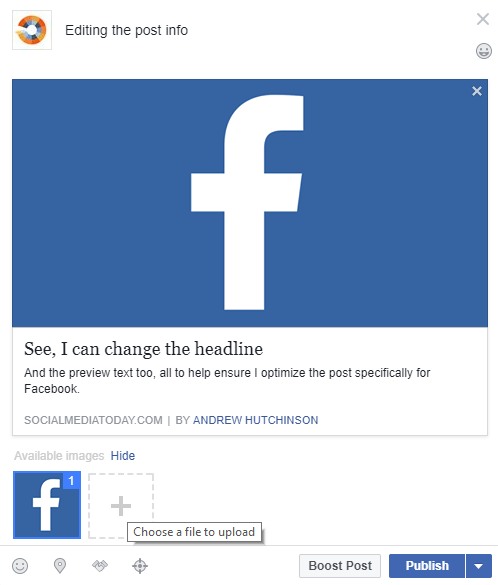 As of July 17, you'll no longer be able to do this. And many Page managers are displeased with this news.

"By removing the ability to customize link metadata (i.e. headline, description, image) from all link sharing entry points on Facebook, we are eliminating a channel that has been abused to post false news. We also understand that many publishers have workflows that rely on overwriting link preview metadata to customize how their content appears to audiences on Facebook. We're committed to a solution that supports them."

The problem is that spammers can make any link appear like something else - add a link to a phising site, change the image, headline and description, and you're bound to trick a few people into unsuspecting clicks. As such, the move makes sense, but it's definitely worth noting, especially for those who have used this option to optimize for Facebook.

As Facebook notes, they are working on a solution. Alternatively, you'll still be able to use different variations of such info in paid ads.

Facebook's also giving event managers the ability to share the event multiple times, in both News Feed and Messenger.

Make multiple times for an event w/ individual tickets. Ppl can share them in News Feed or Messenger pic.twitter.com/KchTVALxcC

We're looking to get a more in-depth overview of the potential benefits of this change in the coming week.

And the last update of note this week is a new live-streaming preview, which not only notifies you of when a Page you follow is broadcasting in real-time via a drop-down notification, but also shows you what they're sharing in a small video panel to entice you in. 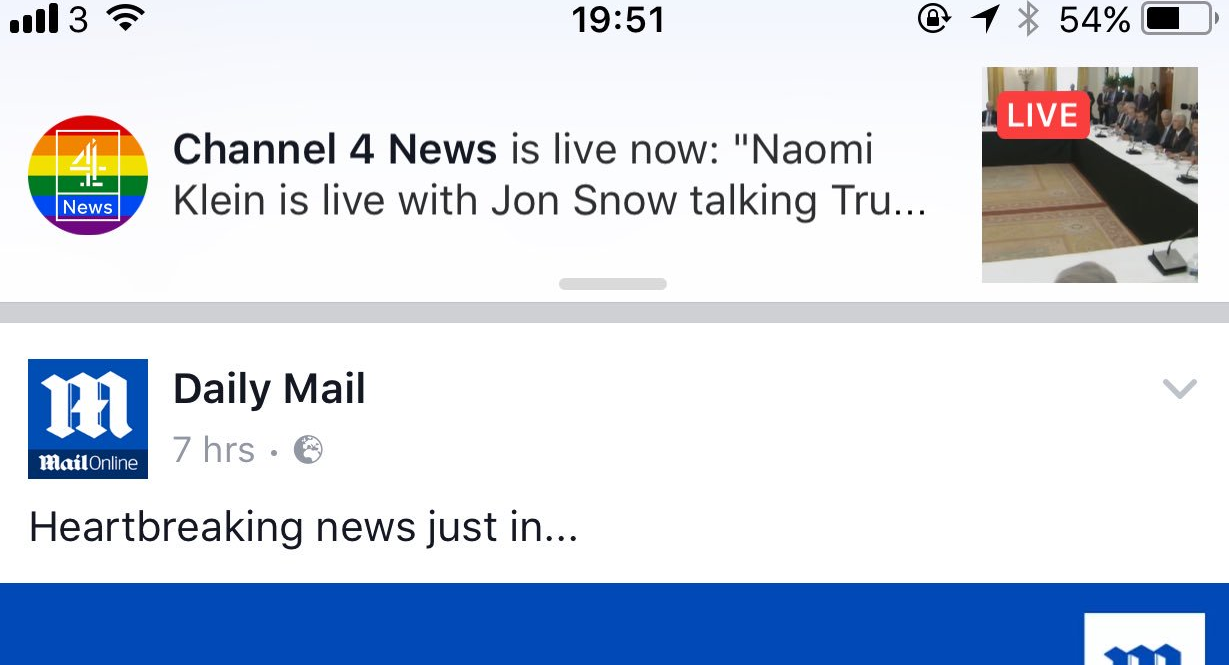 Facebook's been testing out various notifications of this type to get more people tuning into live broadcasts, underlining their video focus. This new variation, however, may be the most compelling yet, as it actually lets you see the broadcast, prompting you to view more.

As noted, Facebook's always testing, and we'll keep you updated on all the latest news and updates we find in the social sphere. Thanks to Matt Navarra, Giuliano Ambrosio, Moshe Isaacian and Studiotime for this week's tips.