Almost every day, there's something new in the social media space . With so many platforms now (there are more than 200 social media apps in existence), and billions of users across the world, there's also an increasing need to innovate and evolve in order to stay ahead of the competition.

Some of these features are major - Twitter announcing the pending closure of Vine, for example - yet there are also a lot of smaller updates, trials and tests that can go under the radar, but are important to know about and stay on top of. Even if not all of these features materialize from such tests, they provide an interesting indicator of where each platform is looking, at what pain points they're seeking to fix or tools they're looking to facilitate in future.

As part of our ongoing effort to provide you with the best coverage of the latest social media news and insights, we feel it's important to cover all of these updates and tests, but sometimes they're not worthy of a their own individual post.

So to keep you up to date on these smaller changes and features, here's a rundown of five upcoming or "in test mode" features that are currently being trialed by some of the major platforms - starting with Twitter, which is looking to roll out a new option to tackle on-platform abuse.

Twitter's battle with trolls and abuse has been well-documented - it was even cited as a key reason that some potential buyers (including Disney) walked away from making a bid for the platform recently. How Twitter goes about resolving that issue, no one knows for sure, but it is a major problem that the platform needs to resolve - and it's only a matter of time before we see another high profile case of on-platform abuse that once again shines a light on the issue and brings more bad press for the company.

Recently, Twitter introduced a new "Quality Filter" option which utilizes an AI-powered algorithm to detect and eliminate questionable tweets from your timeline, including threats and offensive or abusive language. And recently, some people were given access to Twitter's next option on this front - a new tool which enables users to mute specific words and hashtags from your timeline. 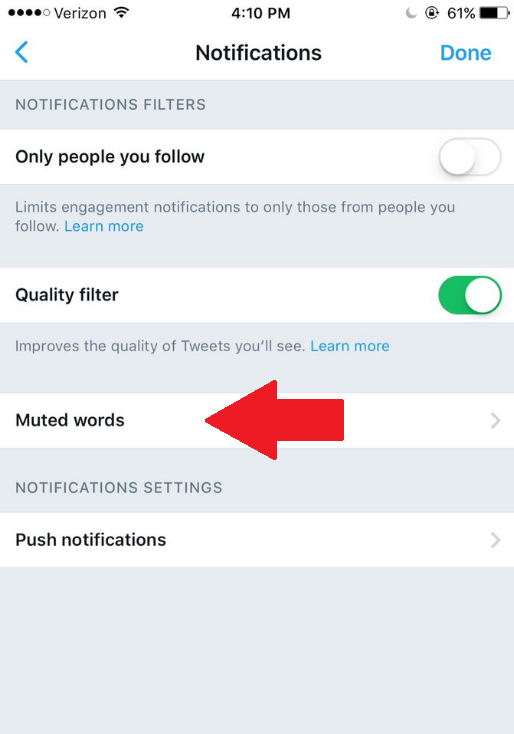 As you can see, the new option would be available within the Notifications menu in your Settings - from there, you'd be able to enter in any word you wanted to eliminate from your feed. 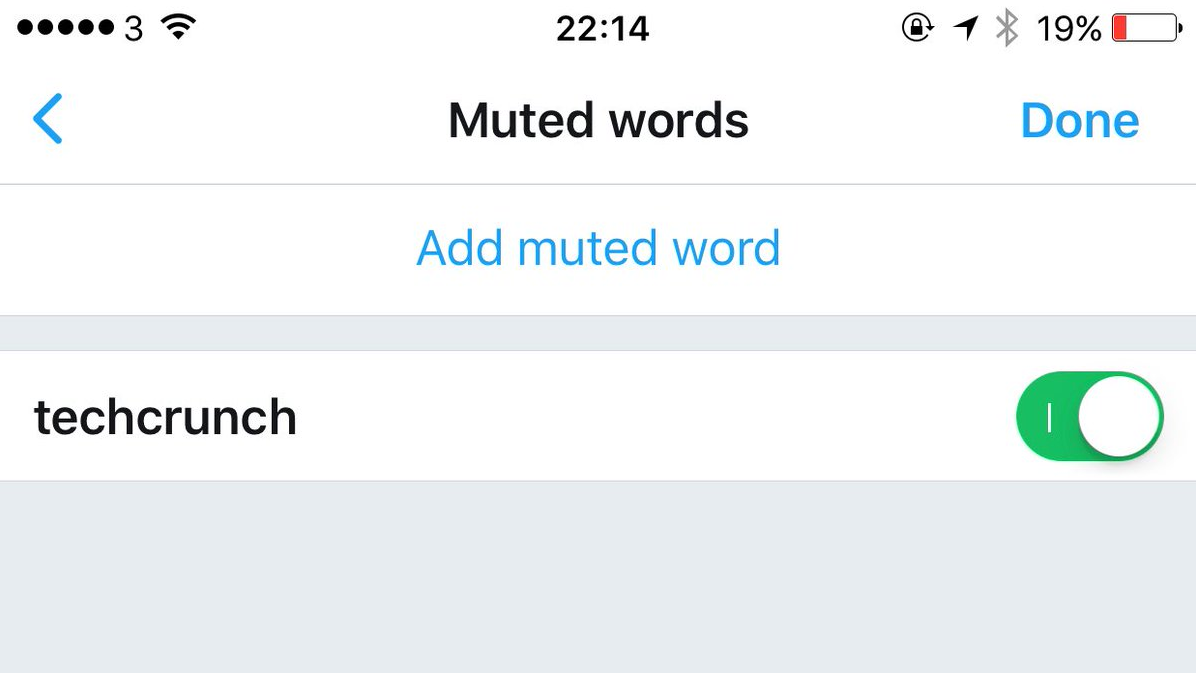 As noted, the new option was made available to certain users last week, but it was quickly removed - a source told The Next Web that the feature was likely made available early by accident, indicating that it may be released sometime soon.

Instagram released a similar tool in September which enables users to hide comments featuring certain words, or even emoji, from their comment stream, while Facebook introduced keyword blocking back in 2011. And while it's not a solution as such, it does provide users with another way to control their on-platform experience, which can only be a good thing in the ongoing effort to make the online space safer and more comfortable for all.

Twitter's Dashboard app, which they released back in June, has seen mostly praise from users. And now, Twitter's looking to boost the functionality of the app, adding in new options to create customized tweet streams based on keywords and lists.

Love lists? With Dashboard for iOS and web you can now create feeds from your lists. https://t.co/SiUY46ILKc pic.twitter.com/uZchUI6AGr

You can also use the functionality to track relevant hashtags and mentions of our competition, with helpful indicators showing you the tweet volume for each, helping to hone your focus.

Create feeds of terms and hashtags that you want to keep tabs on. pic.twitter.com/RBkcWR7DOn

You can then scan those feeds within the Dashboard, making it easier to keep tabs on all the relevant conversations and angles.

With custom feeds at your fingertips, you get the whole picture every time you open Twitter Dashboard. https://t.co/SiUY46ILKc pic.twitter.com/pJkdlZj7xE

Of course, you can do much the same in a social management platform, like Hootsuite or Sprout Social, but seeing Twitter actually build such functionality into their own apps is a promising sign. People get a heap of value from Twitter data, though when it's filtered through third-party tools like these, the platform itself sees less value from it. Bringing the same functionality back into the Twitter native experience could be a great way for Twitter to capitalize on that attention.

This one's a bit more controversial, and I'm not sure it'll see a wider release. The Guardian has reported that Twitter's testing a new feature on its iOS app which turns on Apple's "Reader" mode by default on every link opened in its in-app browser - meaning that rather than seeing an article as it's presented on the relevant website, users will be given a stripped-down version which opens within the app. 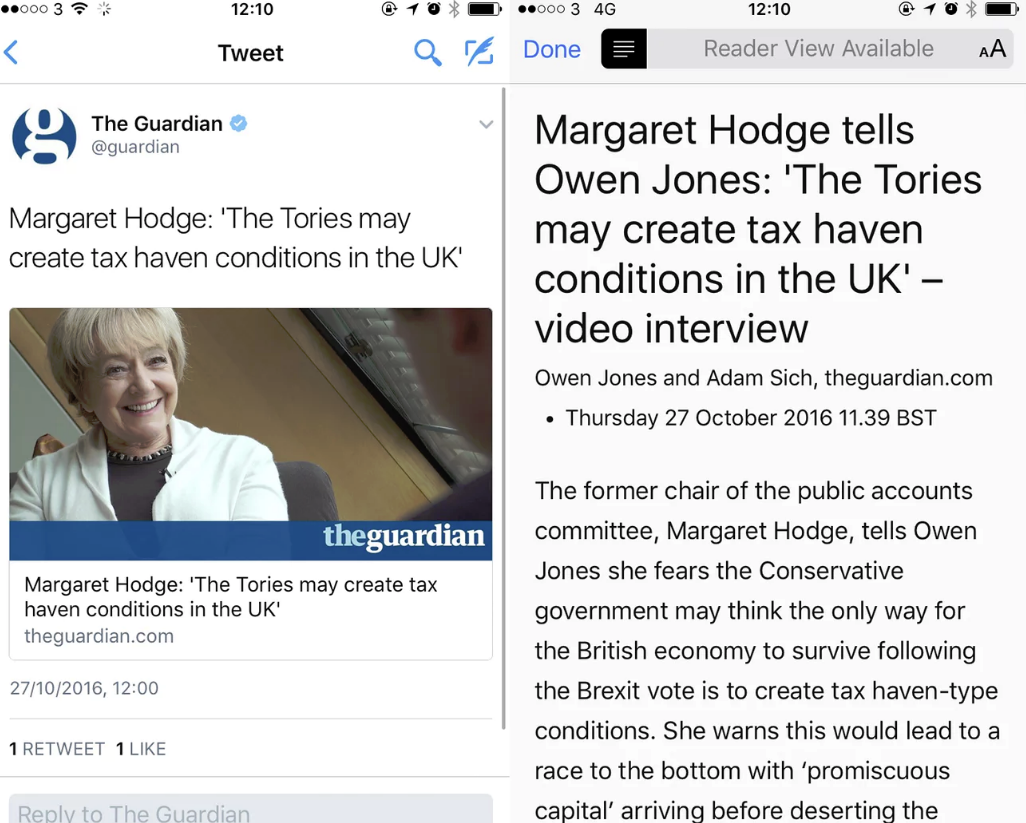 As noted by The Guardian:

"Reader mode is a oft-forgotten feature in Safari that strips out most of the formatting from a webpage, removing adverts, navigation links, comments, and almost everything else except for the main content of a text-based article."

If Twitter were to roll this functionality out more widely, that could cause headaches for publishers, as viewers wouldn't be exposed to ads on their sites, reducing monetization capacity.

Such a move may actually push publishers away from the platform - over time, referral traffic from Twitter has been in decline for most organizations. If they're not able to generate the same amount of revenue from tweet links, that may give them more reason to increase their focus on other platforms for distribution.

The impetus behind the test is likely faster mobile load times as Twitter looks to meet rising user demand caused by the broader adoption of Facebook's 'Instant Articles' and Google's AMP Pages, though this solution seems less than ideal.

It'll be interesting to see if they progress with a wider trial. 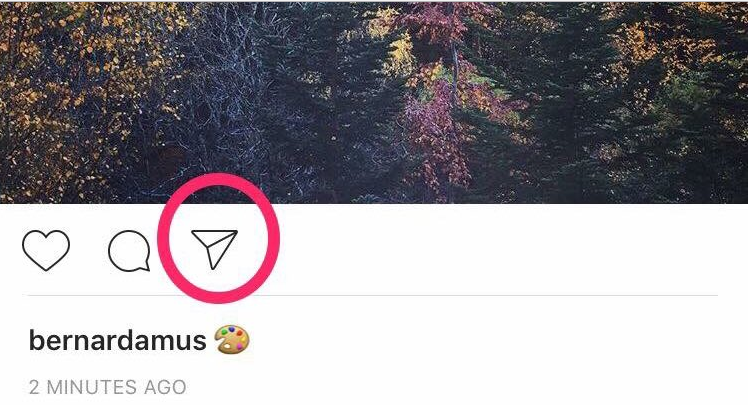 For comparison, here's what the current button looks like. 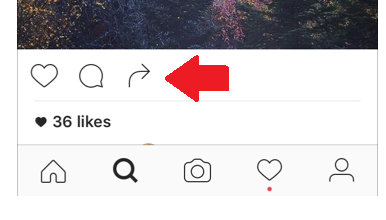 It appears to be only an aesthetic update, but interesting nonetheless - users have already noted that it looks similar to the share function in WhatsApp, which may be the aim, to better integrate the functionality across devices, so it's clear to more users exactly what that share button means.

And lastly, TechCrunch has reported that earlier this year Facebook made an offer to purchase an Asian Snapchat clone named 'Snow', once again underlining Facebook's apparent obsession with eliminating Snapchat as a competitor.

According to TechCrunch, Snow has around 80 million downloads, and is adding 10 million more each month. Snow also has over 36 filters and more than 200 masks available within its system, far more than Snapchat offers. 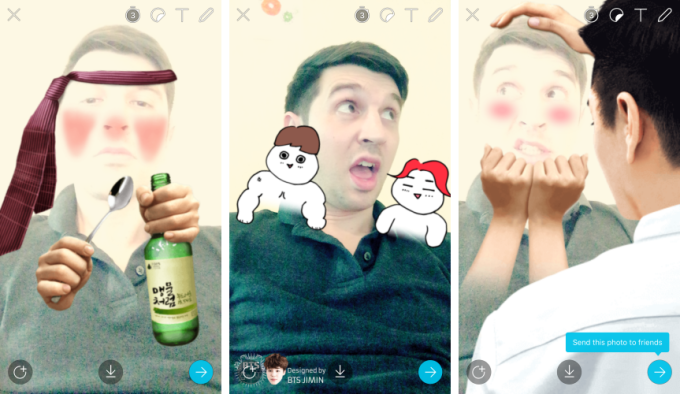 And while Facebook looking to acquire another Snapchat-like app is no real surprise, it is interesting to consider how Facebook may have been looking to use Snow to build out its own features. Last week, Facebook unleashed its latest assault on Snapchat with the launch of its new camera options within Facebook (initially available in Ireland only) which enable users to apply video masks and send disappearing messages to connections within Facebook itself.

As noted in that post, while Facebook's releasing more and more copycat features that may slow Snapchat adoption, where they'll really win out is by introducing their own, more innovative functions and tools which give people a real, significant reason to switch across and try them out. If Facebook can introduce tools that are newer, fresher than Snapchat, that'll inspire more people to take their phone out at gatherings and show their friends, which, in turn, will generate more buzz and get more people using these new options.

The trick to achieving this, of course, is that Facebook needs to be more Snapchat than Snapchat - they need to release features that are beyond anything users have seen already. There are some tools within their new camera option that fit this mold - their 'reactive filters' enable a new kind of interaction, where users can push leaves or snowflakes around on screen - but maybe, through an acquisition, or even by mimicking features in other, similar apps like Snow, Facebook maybe be able to boost their creative capacity and tools beyond those offered by Snapchat. And if a few of those catch on, that could be a big win for The Social Network, and a big blow for the yellow ghost.

Given that Facebook sees these tools as a sort of introduction to augmented reality, we'll likely see more interesting options coming soon on this front.