Recently, when writing about Facebook's new fine-art themed visual effects, we noted that:

"These tools, combined with their new image filters, and assisted by the team behind Masquerade, could be the basis for a whole new set of options that are simply not available in any form on any other platform. That's where Facebook could really win out. The samples we've seen thus far are similar, they're what we've all seen before. But something totally new and different could give Facebook Live and/or Instagram Stories a significant boost."

This is Facebook's latest bold effort to slow the growth of Snapchat. Called simply "the new camera", the platform's selfie-focused system will include (according to TechCrunch):

Those reactive filters are of most interest - as noted, while most, if not all of Facebook's visual additions thus far have replicated those available within Snapchat (and more recently Prisma), where Facebook will really be able to win over new crowds is if they can release new, more innovative image tools that make people want to come and check them out, then make them want to share the images they create with their friends.

This is how Snapchat's Lenses have gained such momentum. Used in more than 10 million Snaps every day, even if you're not going to send a photo using a Snapchat Lens, you check them out because they're so cool. That's the big challenge for Facebook, to produce something more interesting and compelling, something that inspires users to take out their phones at gatherings and tell their friends "you have to check this out..."

You can see one of these reactive filters in action in the above video, pushing around stardust on screen, which responds to your movement. Facebook's Chief Product Officer Chris Cox recently flagged Facebook's intention on this front, noting that they want to make it easy for the camera to be "an early application of AR." In this sense, Facebook sees these new tools as an opportunity to show off their innovations in this space, innovations that'll, eventually, lead to the development of interactive virtual reality environments. And given Facebook's wider focus on VR and the next generation of social interaction, you can bet that they have a whole lot of tricks up their sleeve which can make the process more interactive and exciting - and may just take the shine off of Snapchat and its visual enhancement tools.

In terms of the new camera, the new options will be easily available from your mobile News Feed, with a camera icon in the top left, or you'll be able to swipe right. 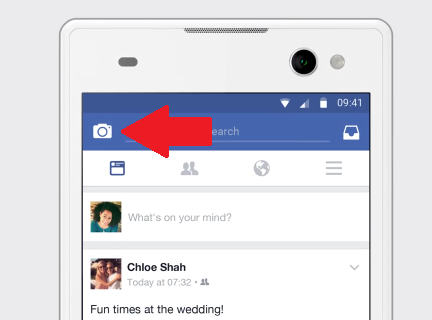 Once activated, you'll be taken to a full-screen, Snapchat-like camera, with options available along the bottom of screen. 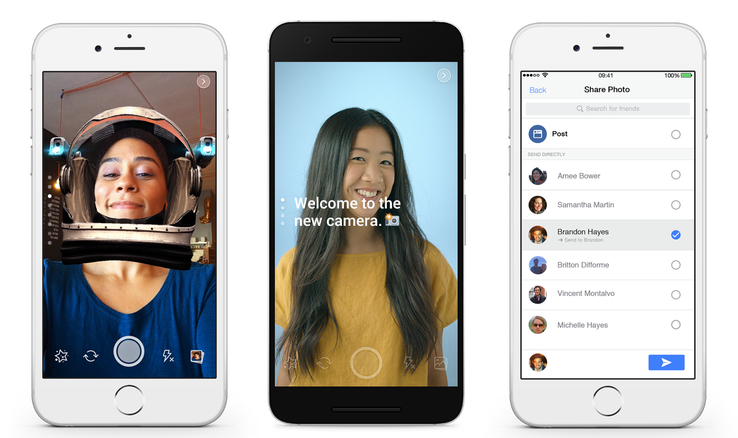 You can swipe down to see the different filters on offer, or add effects by using the various creative tools, which include (via TechCrunch) -

"...everything from pieces of clothing and accessories you can stick on, to geofilters that show stylized graphics describing where you are, to filters that make your footage look like it was painted by Van Gogh."

Once you've created your image, you can then post it to your News Feed as normal, or share it via a new private messaging feature. The new option enables you send content within private groups, which each recipient only able to view the content twice - the second time via 'replay'. Those who receive your photo can respond via messages that will be overlaid onto the image itself for context. 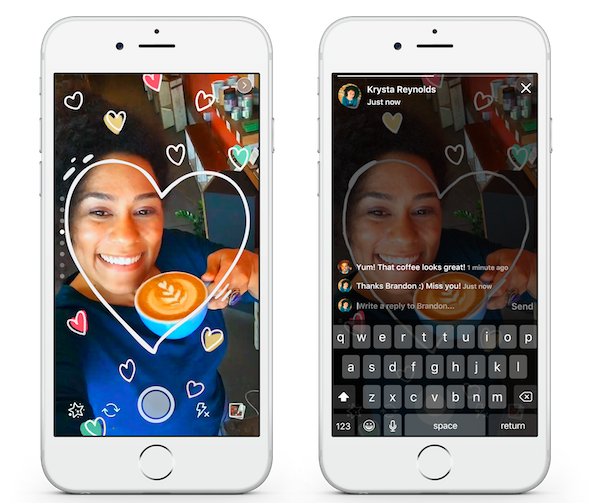 The new features are being made available from today in Ireland as part of an initial test, but Facebook's planning to roll them out more widely in the near future - you'll no doubt have access to them sometime soon. This follows the release of Messenger Day in Poland and Australia earlier this month, and the launch of Halloween masks for Facebook Live earlier this week.

If you thought Facebook was done replicating Snapchat after the launch of Instagram Stories, you were very mistaken. The Social Network, which has seen a significant decline in personal sharing on the platform (reports have suggested that sharing of personal posts - like people's own thoughts and photos - fell 21% between 2014 and 2015, a time when Snapchat saw its most significant rise) has no doubt determined that much of that activity was moving across to the ephemeral content app. Facebook needs that activity on their network - those actions are what fuel their vast data banks and ad targeting processes.

In order to win people back, Facebook's providing all the same tools, but within Facebook and Instagram, the platforms on which more of your friends and connections are already active. As noted, so far Facebook's efforts on this front have merely replicated Snapchat functionality, which will no doubt slow the app's momentum to some degree. But if Facebook can provide better, more innovative options, and more of them to boot, they may actually be able to do more than simply stop people moving across to Snapchat. Maybe, they can even bring those who have migrated back to The Social Network.