Caitlyn Jenner and the Power of Social Media Connectivity

On April 24th, 2015, the world watched on with great interest as Bruce Jenner, a former Olympian and star of the reality TV show 'Keeping Up with the Kardashians' announced that he was undergoing gender re-assignment. In a two-hour interview with Diane Sawyer, Jenner detailed his lifelong struggle with gender, how he had gone through various courses of psychological and medical treatment, but none of it took away the fact that he identified more as a woman than a man.

Jenner's announcement was unprecedented - a person of such stature and fame speaking out about a topic so personal, an issue many people struggle with but few discuss openly. Jenner inspired many by having the courage to speak out and to put himself forward as an example. And now, Jenner has revealed the next phase of his transition, doing a photo shoot with Vanity Fair as Caitlyn Jenner. And social media has erupted in almost unanimous support.

A quick analysis of mentions of 'Caitlyn Jenner' in Topsy shows there have been 475,000 tweets (and rising) mentioning her name in the last 24 hours, with an overall sentiment score of 86 (out of 100), which is highly positive. Compare this to another popular subject from the past two days, Game of Thrones, which has been mentioned in 114,000 tweets, and you get an idea of the scale. And while automated sentiment detection isn't 100%, it is generally indicative of overall trend - sentiment on this subject being so high (86) would suggest that there is significant level of support for Jenner and her new identity, support which can be seen in the many tweets flowing through, including many from well-known celebrities. 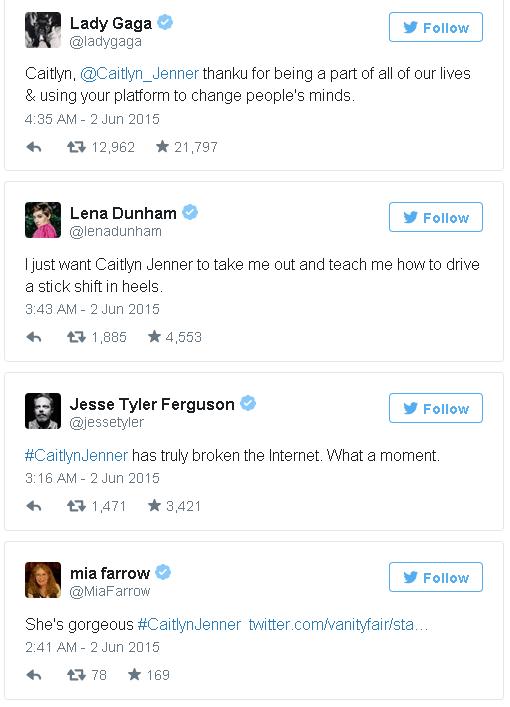 Such overwhelming attention can only be a positive for other people living in a similar situation, and it's largely through the power of social media connection that we're able to see this conversation happen, that more people are able to voice their opinion on the subject. In times past, people simply didn't have a means of sharing their thoughts on such issues, making it harder to have important conversations like this, but Caitlyn Jenner is leading the way, and using her celebrity platform to share her journey, while empowering a whole subset of the community at the same time.

This support is duly reflected in Caitlyn's own social media accounts - Caitlyn Jenner launched both a Twitter and a Facebook account yesterday, both of which now have a combined following of 1.7 million and building. 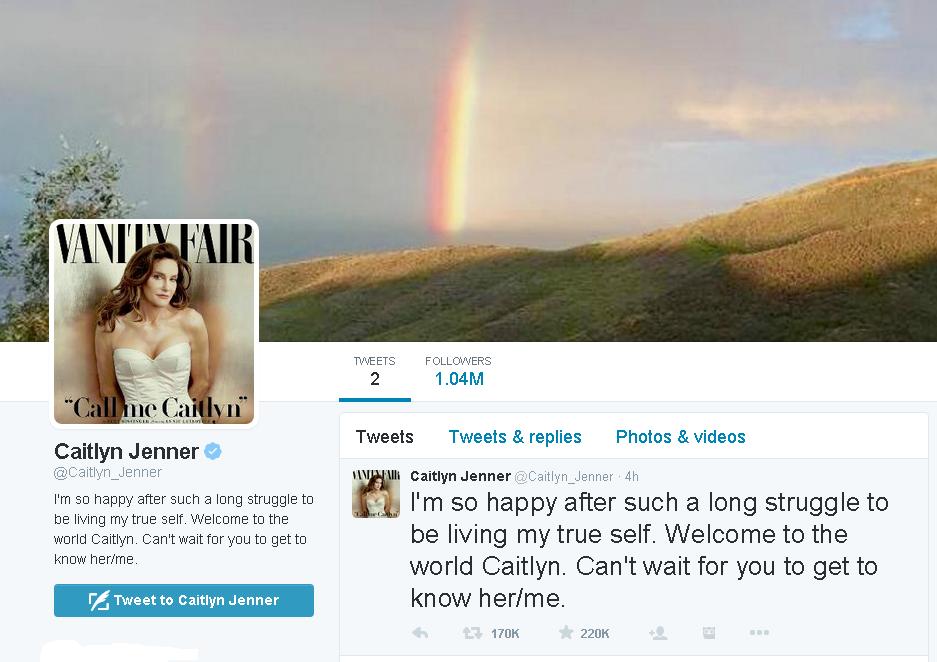 Such support is truly heartening, and it's support that is only truly possible via social media, by giving everyone the ability to have their own voice and to provide their own endorsement, via follows and Likes. While much has been said of social media bullying and the way the medium can empower trolls, less seems to be have been noted on the positive impacts. There's reason for that - the negative impacts can be significant and need to be discussed - but at the same time, the power of social media for social good should not be underestimated.

The Power of Connection

Right now, you have more ways than ever to reach out and connect with like-minded folk, to join groups and discussions and share your thoughts with the wider world. Such opportunity, connecting the world on a grander scale, means, ideally, less isolation, less living a life where you feel you don't and can't fit in. It's not always the way it plays out, but the ability to be connected, the opportunities of a more connected world are so great.

This is why it's important that we do see platforms seeking to stamp out bullying and trolls as best they can (even if such actions do prove an impossible task). This is why we should support and empower those who are subjected to abuse online. Because the community benefits social media can provide, in the sense of greater connection, are amazing. Caitlyn Jenner's story exemplifies this.

On a Global Scale

Looking through the data, Caitlyn Jenner and her Vanity Fair photo shoot is by far the biggest topic of discussion on the web right now - as noted by several commentators, this is how you truly 'break the internet'. Obviously, this is a massive coup for Vanity Fair, but more importantly, this is an amazing step for society. Not everyone supports Caitlyn Jenner's transition, not every tweet and post on the subject has been positive. But the conversation is happening. Caitlyn Jenner is on the front cover of Vanity Fair, she's on the front page of the global discussion. That, coupled with the significant amount of support being shared on social media channels, is amazing, in more ways than one.