Does That Emoji Mean What You Think it Means? New Research Looks at Emoji Misinterpretation

Does that emoji you've sent really mean what you think it means? While most of emoji seem to have a generic meaning or implication, a new study has found that emoji interpretation can vary significantly, and depending on the emoji you use, that could be an important consideration.

The study, conducted by GroupLens Research at the University of Minnesota, found that a particular concern is that emoji are displayed differently across different devices and operating systems, and that can lead to vastly different meanings. For example, here's the 'grinning face with smiling eyes' emoji as displayed across a variety of systems.

This emoji, the researchers found, is among the most commonly misinterpreted, with a significant variation in interpreted meaning from different device users.

That scale formed the basis of their research, with participants asked to denote what they felt each emoji meant. The data below shows the variance in interpretation for each emoji across their responses .

As you can see, what, exactly, you're intending to communicate may not be as clear as you might think. 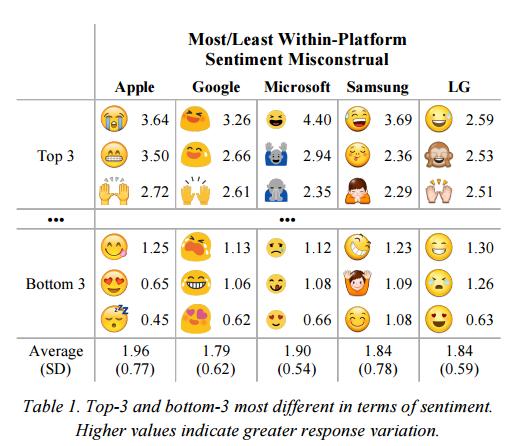 As explained in the research paper:

"With an average sentiment distance of 4.40, Microsoft's rendering of "smiling face with open mouth and tightly closed eyes" has the highest disagreement. For that emoji, 44% of participants labeled it as negative and 54% labeled it as positive, indicating a clear lack of consensus. Because Microsoft's rendering has a within-platform sentiment misconstrual score of 4.40, our participants differed by 4 sentiment points, on average. On the other end is the Apple rendering of "sleeping face" with an average sentiment distance of 0.45. For that emoji, 79% of participants considered it to be neutral (sentiment = 0) and all but one of the other participants gave it a 1 or -1. Overall, 44 of 110 renderings (40%)"

Basically, if you're using any of those in the 'Top 3' segment, you might want to re-think it - or, at the least, ensure your meaning is clarified by the surrounding context.

The conclusion of the research paper was that emoji users would benefit from increased uniformity of the way emoji are displayed across platforms. The Unicode Consortium is, essentially, in charge of the core code that fuels emoji, but they can't, however, control how emoji characters are rendered on different platforms, and thus, the likelihood of miscommunication, particularly with the emoji noted above, will remain high. Essentially, there's not much that can be done, other than for emoji users to be aware that their communications and meanings could be altered across different systems - and as such, they're using them at their own risk.

While this may seem like a light-hearted investigation, the implications can be quite serious, particularly as brands look to get on board the emoji bandwagon and generate more interest in their messages. Of course, there are similar risks in hashtags, in that you need to understand the wider context before using them, but emoji misinterpretation is likely more problematic, considering that the sender has no way of knowing how those characters are going to appear when the reach each recipient.

The researchers included this example exchange to highlight the differences in emoji presentation between the sender (on the left) and the receiver. (on the right) 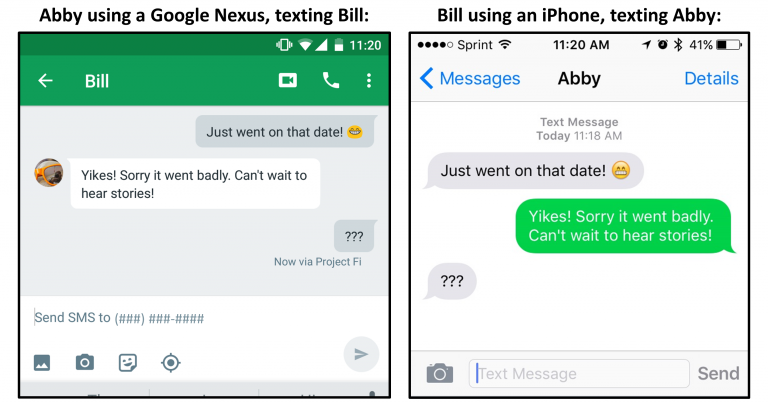 Of course, you could just avoid using emoji at all - it's always a risk trying to catch onto a trending image or tag, there's always a chance you might use it the wrong way. But emoji use is huge, particularly among younger users - some stats suggest that more than 74% of US internet users have used emoji at one time or another. That popularity was the inspiration behind Facebook's 'Reactions' emoji tool bar, and why Twitter made the switch from 'stars' to 'hearts' for favorites. Emoji use is so high amongst their respective user bases anyway that both platforms felt the need to better facilitate such responses through dedicated systems - Twitter's also reportedly working on an extended emoji response toolset to stay up with this trend.

Given their rising use, it's not hard to imagine that emoji will continue to play a larger part in our wider interactive landscape. Reports have suggested that emoji use gradually declined in popularity in Asian nations, where the characters originated, which could suggest we'll see the same in Western use at some stage. But at present, there doesn't look like being any slowdown in our obsession with emoji. They're quick - which is increasingly important with people trying to communicate via mobile - they're expressive and they're fun.

But they do come with a level of risk. As this research highlights, emoji can be misinterpreted, misconstrued, and can confuse your intended message as a result. It's worth taking note of these commonly mistaken emoji, in particular, and ensuring your message remains clear.