Should You Use Emoji in Your Branded Communications?

Do you use emoji in your marketing efforts? To some, they fit in naturally and have become an organic extension to their communication and outreach efforts. To others, they're unprofessional - how can your brand be taken seriously when you're trying to convey meaning in smiley faces and hearts?

Whatever your personal view on emoji is, the bottom line is that they work - maybe not for all industries, but their rising popularity means that they do actually benefit brand communications in a range of sectors. Regular Social Media Today contributor Larry Kim wrote a post this week for Marketing Land outlining how he's seen big increases in social engagement by incorporating emoji into his posts.

"Think of the sheer volume of words people sift through in a day, especially online across media, websites, email and text messages. People are overwhelmed with words. We know that people process visuals 60,000 times faster than plain text, and emojis are a great way to tap into that image power in your social posts, where space is at a premium."

There's little doubting the core logic, but still, many have hesitations about inserting an animated character into a brand-representative message. Done right, they can work, but do it wrong and you could become the butt of the latest 'social media fail' joke.

So is it worth taking the risk and jumping on-board with the accelerating emoji trend?

There's no question that emoji has become a transcendent communications tool. Facebook's all but acknowledged this with the addition of 'Reactions', a set of emoji that people will be able to use to respond to Facebook posts beyond 'Like' alone (currently being tested by users in Spain and Ireland). In the accompanying notes about Reactions, Facebook detailed that Reactions was developed, at least in part, by analyzing how people were using 'stickers' on the platform - stickers are Facebook's own emoji-like tools that enable you to insert smiley faces and similar animated options into Posts. This suggests that part of the decision to implement Reactions was because people were already utilizing similar functionality anyway - emoji are already popular enough on the platform that Facebook's moved to take them more seriously and build them into the wider user-experience.

Twitter, too, seems to have factored in the popularity of emoji as part of their latest switch from a star to a heart for favorites. Research conducted in 2014 showed that the heart emoji was by far the most popular on Twitter, and given the universality of emoji, if Twitter's seeking to appeal to more users by using more common symbol to convey meaning, it makes sense that they'd go with the one which is already popular and used across many other platforms, right? Instagram, too, released data earlier this year which showed that nearly half of all text on the platform now contains emoji of some form.

However you, personally, might feel about their use, the data on the rise of emoji is hard to ignore - and when you combine these findings with noted boosts in engagement, such as those documented by Larry Kim, maybe it makes sense that, regardless of any previously held reservations, it may be time for your business to consider inserting a few smiley faces into your content to better keep up with this trend. But then the next question is, how can you do so in a genuine, non-cheesy way?

The How and Why

Interestingly, Twitter's UK blog last week published a post which examined how brands can succeed through the use of emoji on the platform.

"With 80% of our users accessing Twitter via mobile, it's the perfect platform for emoji fans to express themselves in fun, creative ways. What's more, people really love to use emoji on Twitter. The top 10 most popular emoji have been used over three billion times*. And with so many emoji characters to choose from, the imagination and personality on display on Twitter has been extraordinary."

The findings speak to how seriously Twitter is taking the emoji trend, and why they're putting significant internal focus on emoji use. And it's a very valid point - with so many users accessing the platform (and all social platforms for that matter) via mobile, providing quick, meaningful response options is a must, and communicating via emoji does exactly that for an increasing amount of users.

In line with this, Twitter's been testing their own range of Twitter-exclusive emoji, triggered by specific hashtags - including these ones which were introduced for the Pope's recent visit to the US. 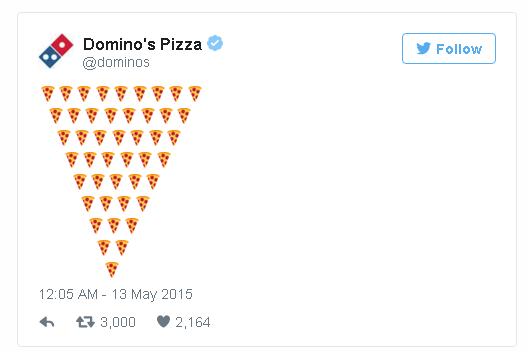 While not all of these points are applicable to all brands, they do provide some interesting food for thought around emoji use, and may help expand your thinking on how they can be used in a meaningful and engaging way.

However you look at it, the emoji trend is exactly that - a real, genuine trend, something that's being utilized by a growing number of people. Should your brand use emoji in its messaging? It's a case-by-case proposition - definitely you'd expect such trends would be more applicable to B2C than B2B providers. But whatever your sector or industry, I wouldn't discount their potential.

The stats underline the emoji trend, the data suggests they could help generate significant boosts in engagement, when done well. More and more consumers are using them, more and more discussions are being conducted via combinations of images and text. As younger consumers move into more commercially significant demographic brackets - those target sectors of most interest to your brand - it may just make sense that you communicate with them in the means they're most accustomed.

Essentially, the best advice would be not to let your personal opinions drive a decision on possible emoji use. Let the data decide, let your audience tell the story of what's important to them, then make a call based on best fit from that, more informed, perspective.