Earlier this week, reports and examples suggested that Twitter might be working on a new emoji response tool which would enable users to replace the 'heart' icon for a like on a tweet with any one of 36 emoji options specifically aligned to your response. 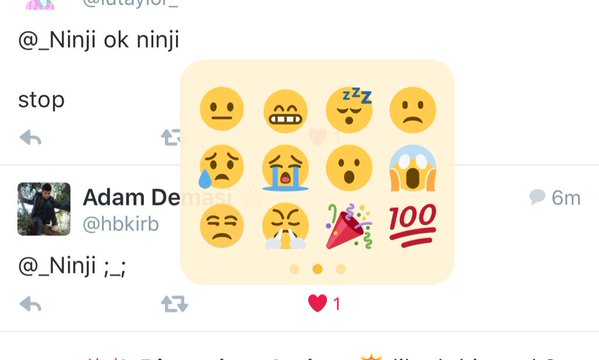 It looks a lot like what Facebook's doing, right? The idea's almost exactly the same as Facebook's 'Reactions' emoji response option, which is currently being tested among users in Spain and Ireland. The reports prompted some commentators to call out Twitter for trying to copy Facebook, for trying too hard to keep up with their bigger, more popular social rival when they'd be better served, instead, by concentrating on the differentiating factors that make Twitter great.

But there might actually be more to it than that. As noted when Twitter switched their favorites 'star' icon to a 'heart', research has shown that emoji use is increasing across the Twittersphere - with the heart being the most popular emoji on the platform by a significant margin. Given that, it makes sense as to why Twitter would switch from 'star' to 'heart' - in an effort to get more users onto the platform, Twitter's working with user trends to make the service more appealing, taking a data-driven approach to the additions and changes they implement.

Along that same line of thinking, Twitter's emoji response option may also make good sense, and new data from Twitter, released via the official Twitter Data Blog this week, underlines the logic behind why they might be looking to provide more emoji options for users.

In a new post looking specifically at how emoji are used in tweets about TV shows, Twitter notes that since the introduction of emoji in early 2014, they've become a 'practical and fun way to convey extra meaning and emotion in the space of 140 characters'. Twitter's been tracking the use of emoji across the platform and has provided some insights into their use. And while the data here examines tweets about TV shows specifically, they're likely indicative of wider emoji trends on the platform, and may point to why Twitter is trying to introduce ways to encourage and facilitate more emoji use - specifically this:

"As of July, around 14% of all TV-related Tweets contain at least one emoji character, up from 9.8% in April 2014 when emojis were first introduced."

That's a significant increase, particularly when you consider that there are millions of tweets about TV shows being sent every day.

So what are the most popular emoji used in relation to TV shows? 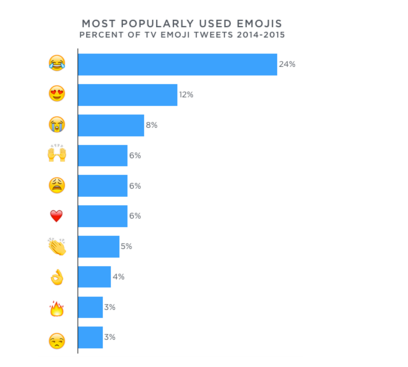 That's right, the Oxford 'Word of the Year' winning 'crying from laughter' emoji is the most used in relation to TV show discussion, and by a big margin. Interestingly you can see the heart in there at sixth. Among those top icons, the heart makes the most sense, if you were to consider the thinking behind why Twitter opted to switch from the favorite 'star', while the 'hands up' emoji may have also been considered (though, as noted, the 'heart' is the most used across the platform in a more general sense).

In terms of what types of programming inspired the most emoji use, music, drama and reality programming attracted the largest proportion of emoji response. 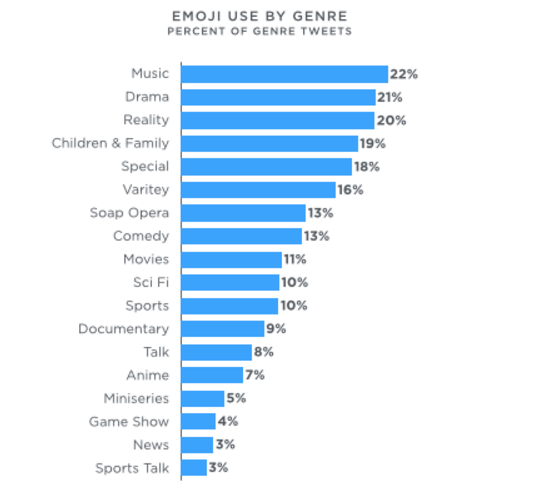 It's also interesting to note how these emoji were used - for example, the most used emoji for drama programs were:

When you see them listed like that, is helps to contextualize why emoji are so popular in this context, and how they're able to convey significant response without the use of words. On that front, maybe Twitter sees the increased use of emoji as a way to encourage further discussion via tweet without having to make changes to their traditional 140-character limit. There's been much speculation about a possible increase to Twitter's character limit, one of the platform's key, defining features. Kevin Weil, Twitter's SVP of Product, discussed these reports in a recent interview at Open Mobile Summit, saying that:

"Great product teams are always challenging their own assumptions, they're always questioning their own core beliefs. When it comes to the 140-character limit, the way I think about it is brevity is a key part of Twitter, it's part of what makes Twitter amazing, so the challenge and the opportunity for us is "can we make it easier to tweet, can we increase your ability to express yourself on Twitter?"

Making the process easier, increasing the ability for users to express themselves. The addition of an embedded, emoji response option fits this mold, no?

But one of the most telling and interesting stats from Twitter's data on emoji use in relation to TV discussion comes in the last section of the post, looking at which demographics are using emoji the most.

"Perhaps unsurprisingly, emoji fans skew young, with 86% of emoji users being 24 or younger and nearly half aged between 18-24."

Emoji are massively popular in that next generation of users, and Twitter's audience has always skewed young. It makes sense that in order to stimulate more user growth and get more people to the platform, Twitter would look to provide tools that appeal to that, specific, demographic set. Twitter's also a habitual device - the people who do use Twitter use it regularly, as it becomes part of their every day interactive and media consumption process. In that sense, appealing to younger users is a smart move for the long-term - if Twitter's able to develop sticky relationships with those users at a young age, that'll increase their chances of them becoming dedicated fans for life. The more tools they can provide that'll keep those users on the platform for longer, the more important Twitter becomes to their connective DNA.

Given these factors, and the stats highlighted on emoji use on the platform, it's not surprising to see Twitter looking to boost the platform's appeal through tools and functionality that align directly with those user habits. In fact, in the coming months, I'd expect to see Twitter experimenting with even more tools and functions along these lines, looking to social trends amongst younger users and how they can be adapted to fit into the wider Twitter experience. Some will see this as copying other platforms, taking inspiration from Facebook or Snapchat, but those criticisms are largely irrelevant in the wider scheme.

Social networks are only as good as the functionality they provide - if they stop adapting and meeting their audience needs and wants, people will just go elsewhere. The ability to hold attention, which comes from delivering products and services that capture attention and serve a relevant purpose in users' lives, is what defines the success or failure of a social network. If trends and behaviors on other platforms provide a pathway to doing just that, it makes perfect sense that these providers - businesses that are held to account, ultimately, by their results in dollars and cents - would look to implement similar to meet such demand.