First up, there's active users - while Twitter has struggled to add more users over time, and Facebook has a significantly larger market share (which would suggest they're closer to reaching saturation point), The Social Network has again continued to expand.

Daily active users for Facebook are now at 1.09 billion, a 16% year-on-year increase. 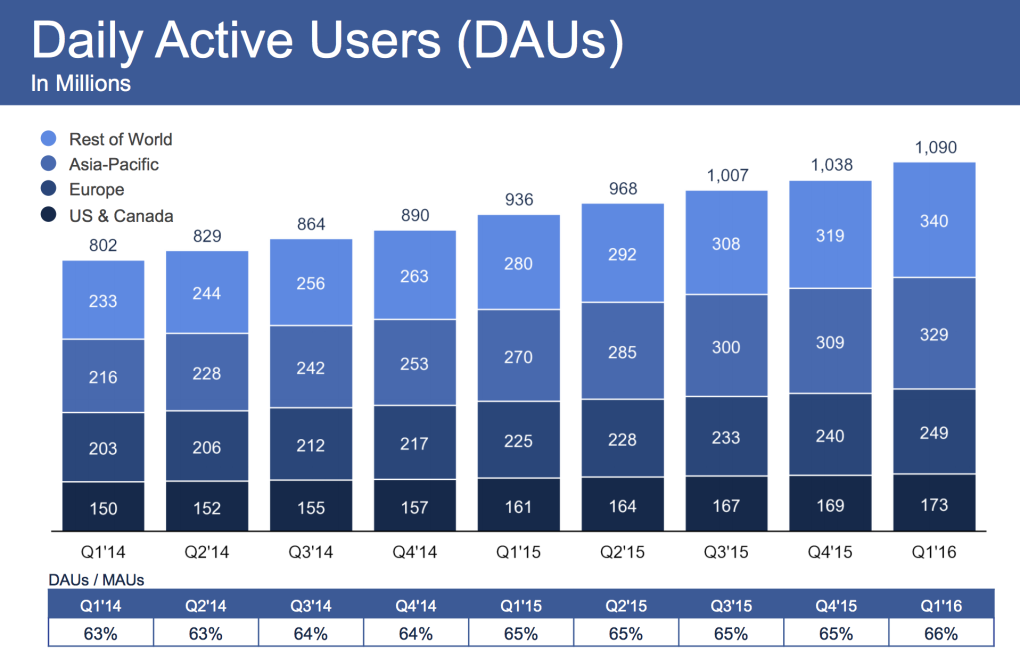 Mobile makes up the lions share of that use, with Facebook now closing in on a billion daily active users on mobile alone (989 million mobile DAU for the quarter, +24% YoY). 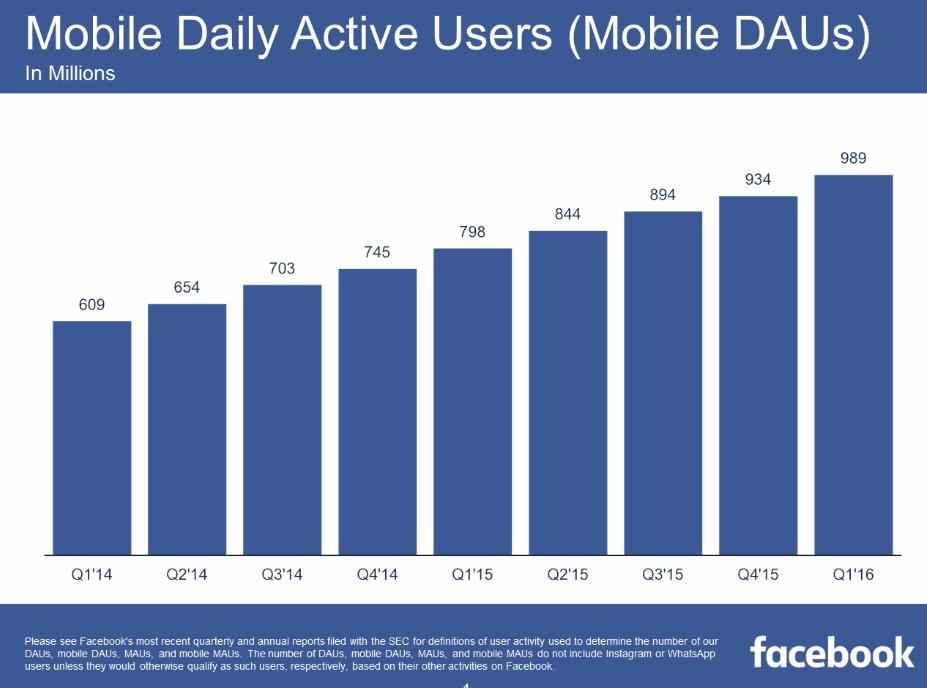 And monthly active users (MAU) has also continued to rise, with the platform now being used by 1.65 billion people. 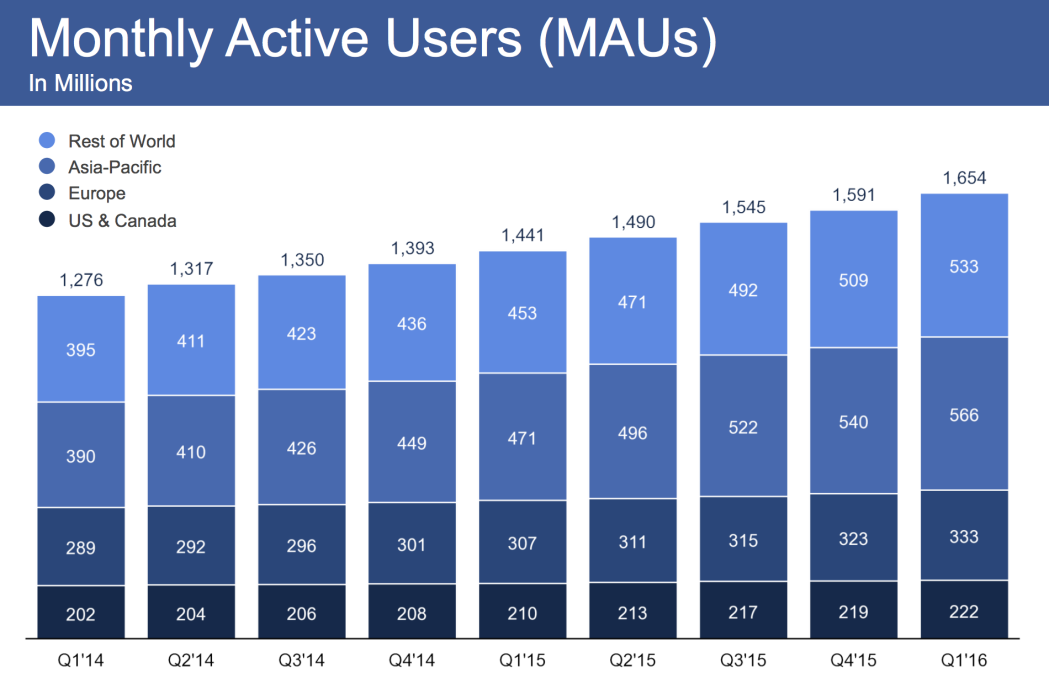 To put that in perspective, the population of China, the world's most populous nation, is 1.38 billion, while Facebook's MAU count also equates to more than a quarter of all the people in the entire world. When you consider that around 20% of them are aged under 13 (the threshold at which you can sign up for a Facebook account) and around 13% are over 65, it gives you some idea as to how huge Facebook's global presence actually is. And it keeps getting bigger, with initiatives like internet.org only set to help expand the platform further - already, the internet.org program has connected more than 6 million people to the internet.

Mobile monthly users, meanwhile, came in at 1.5b. 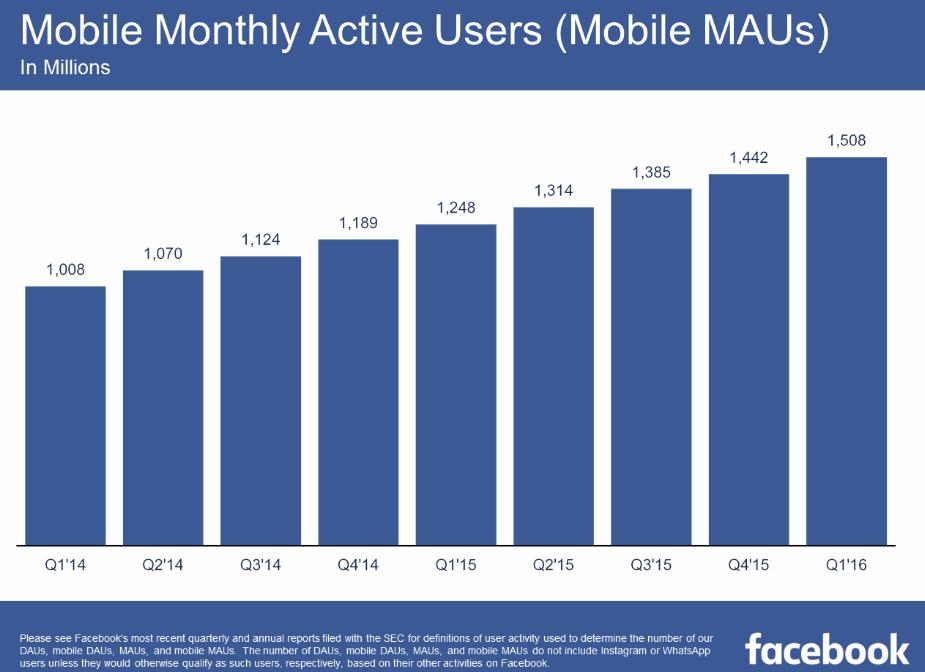 Interestingly, and as highlighted by TechCrunch, Facebook's DAU to MAU ratio grew to 66% from 65% last quarter, which means that even more people are accessing the platform every day, underlining it's presence and strength despite rising challenges from other networks (particularly Snapchat).

In terms of revenue, Facebook reached $5.38 billion for the quarter, beating analyst expectations of $5.25b - and up from $3.3b at the same time last year. 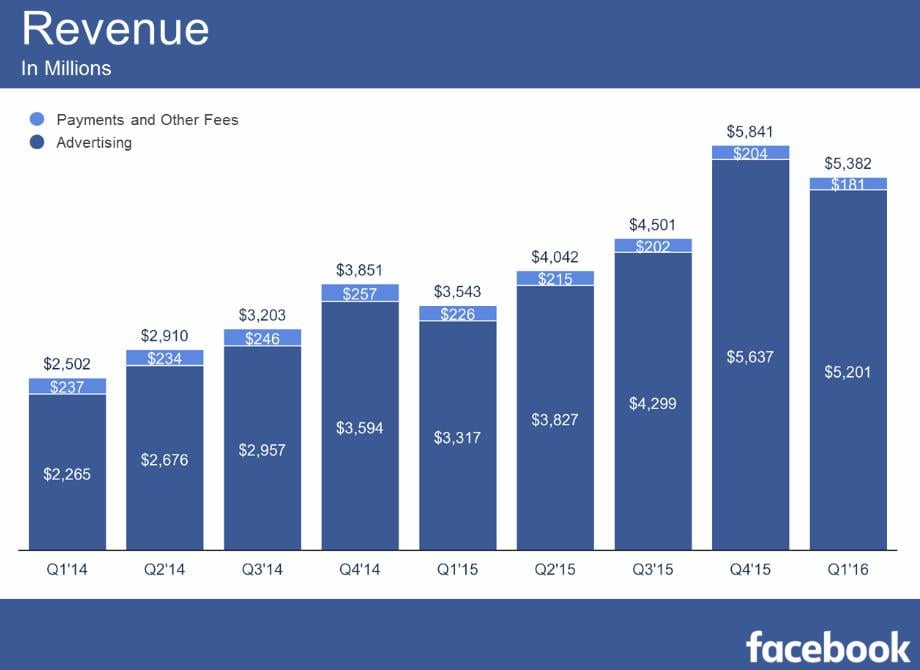 Of that, $5.2b is attributed to advertising, a 57% increase year-over-year.

Of particular relevance is the strength of mobile - mobile ad revenue now represents more than 82% of total Facebook ad take, up from 73% at the same time last year.

In terms of revenue per user - a particularly interesting stat that Facebook highlights in their results - the numbers declined slightly in all markets, but interesting to note the comparison between the significant amount per user Facebook makes in the US and Canada, underlining the potential for similar in other markets. 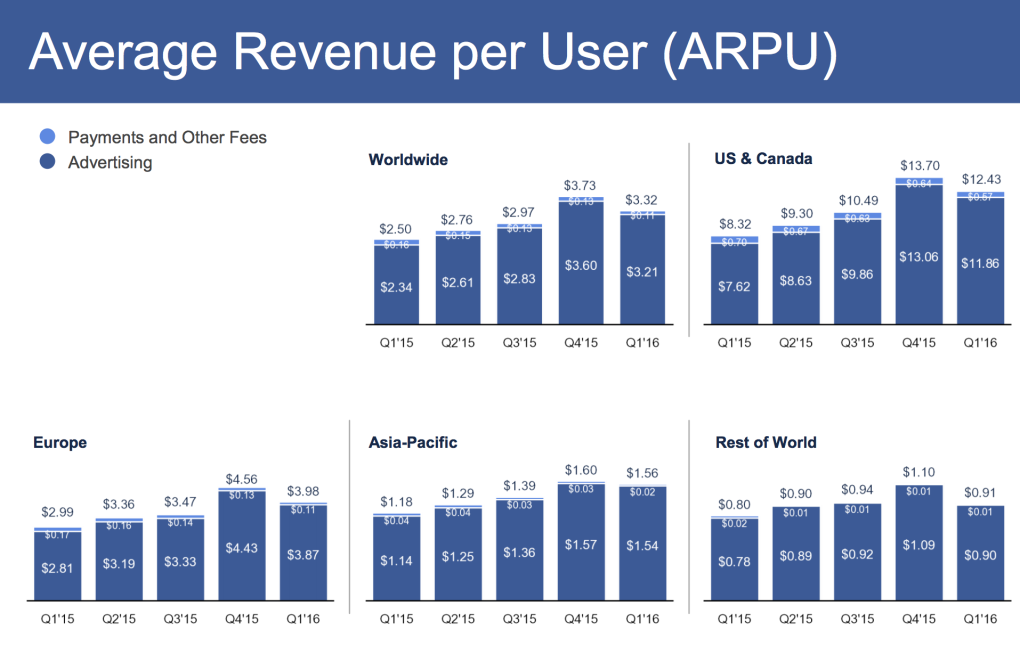 In addition to the financial data, Facebook also introduced a new class of stock with CEO Mark Zuckerberg posting a specific update addressing it. The new Class C stock will enable investors to buy into Facebook without getting voting rights. Zuckerberg says the aim of this is to facilitate their wider goal of investing 99% of his and his wife Priscilla's Facebook shares into causes which "advance human potential and promote equality" over time.

"Today, Facebook's board of directors is announcing a proposal to create a new class of stock that will allow us to achieve both goals. I'll be able to keep founder control of Facebook so we can continue to build for the long term, and Priscilla and I will be able to give our money to fund important work sooner. Right now, there are amazing scientists, educators and doctors around the world doing incredible work. We want to help them make a bigger difference today, not 30 or 40 years down the road."

In the accompanying earnings call, Zuckerberg discussed the platform's performance and current status. Zuckerberg noted that each user now spends 50 minutes per day, on average, across Facebook, Instagram and Messenger - "and that doesn't include WhatsApp". This is up from 46 minutes per day noted the last time Facebook reported this stat back in Q2 '15.

Zuckerberg also talked up the platform's efforts on live-streaming, saying that we're in "the golden age of online video", a medium which, Zuckerberg notes, enables people to interact in a lot of new ways, highlighting Live and 360 content. On 360, Zuckerberg noted that he's a big Game of Thrones fan and a recent 360 video they created of the show's opening credits is now the most popular 360 video of all time with more than 12 million views.

In regards to Facebook Live, Zuckerberg said that some broadcasters who are using Live are finding that they're able to reach bigger audiences than they can on their own shows.

Zuckerberg also discussed the growth and focus on messaging, highlighting, again, that Facebook is now processing more than 60 billion messages per day, three times more than SMS was handling at peak. This is why Facebook is putting such focus on Messenger, with their new bots platform and other advancements to make the system a bigger part of the wider Facebook eco-system.

Zuckerberg also briefly commented on Instagram, highlighting the platform's growth (400m users, 200,000 advertisers) and the coming switch to an algorithm-fuelled timeline. Zuckerberg noted that their success with News Feed, and the ongoing growth in users and usage at Facebook, underlines that using algorithms creates the best and most engaging experiences for users, despite some having reservations about the change.

Zuckerberg also commented on their progress with artificial intelligence for facial recognition and automated captioning of photos and video, and discussed the development of the Oculus Rift which recently started shipping.

It's another amazing result for Facebook, which is a business that's worked out how to evolve and pace themselves as they advance with user expectation. This is most evident in the way they roll out changes and updates - with the roll out of Reactions, for example, Facebook announced their arrival long before they actually made them active for all users. Rather than unload new changes on a wide scale and deal with potential kick back (and users turning away), by announcing them early and rolling them out in a more measured way, Facebook negates a lot of the negative response and keeps the system growing without massive disruption. The numbers also reinforce Facebook's efforts on advertising and their News Feed algorithm more widely - as Zuck notes, the data suggests that such a system, while not popular with everyone, really does lead to an improved user experience.

Facebook's share price jumped over 8% after the earnings announcement, reaching over $117 in after-hours trading.