They were close in their last market update, and now Facebook has confirmed that they've surpassed their latest major milestone - 2 billion monthly active users.

And while, to some degree, this may seem like a minor announcement - Facebook, already the largest social media platform in the world, is now bigger - it's worth taking a moment to consider the enormity of what Facebook's community has become.

In a broad sense, there's the global scale - at 2 billion users, Facebook is now being used by more than a quarter of the world's population, which is currently estimated to be around 7.5 billion. But that's only scratching the surface of The Social Network's actual popularity and influence.

This is due to several factors:

This is an incomplete list, there are various other limitations and factors which mean that Facebook can't possibly reach everyone - but even taking just these considerations into account, Facebook's actual, possible global reach is more like 53% - i.e. of all the people who can access Facebook, more than one in two do so.

This is key element in Facebook's push into India, and to a lesser degree China - while Facebook has faced regulatory opposition to their expansion in India via their Free Basics program, the criticism of that scheme seems somewhat misguided. The basic opposition is that by giving Facebook the power to control which apps and tools are accessible to users via Free Basics, you're giving them control over the market in which they operate - so they could restrict access to, say, Snapchat or Google, or, theoretically, any company they saw as competition.

But the numbers show that they really don't need to do that - more than one in two people who can use Facebook already do. Even if Facebook were to provide universal access to the entire web via Free Basics, the usage data suggests that they'd still win out in gaining a heap of new users (making it a fairly safe gamble for Facebook to invest in).

As such, it wouldn't be a huge surprise to see Facebook greatly expand their audience size in coming years by making access concessions to enter new markets. Because they can, and they'll still see huge benefit.

In terms of comparable scale, Facebook is obviously well ahead of any competitor in the social media space.

That scale gives Facebook huge power in any battle against potential competitors - which is why there are such significant concerns over the future expansion of Snapchat. There's no debate that Snap Inc. has the innovative capacity to compete with Facebook, nor that Snapchat's user base is committed to the app. But that won't matter if they can't scale - and in this sense, Facebook doesn't even need to beat them, they just need to restrict them from future expansion.

With so many new, Snapchat-like features being introduced in Facebook apps, and succeeding, and with Facebook bringing them to global markets where Snapchat really has no presence, Facebook's basically encircling Snap's audience, and closing in through global reach. Getting free of those binds will be a significant challenge for Evan Spiegel and Co. - even if they can better monetize the audience they have, it won't be enough in the longer term.

In celebrating the new milestone, Facebook's looking to reinforce their renewed company mission statement - from "Making the world more open and connected" to "Bring the world closer together".

Pushing the emphasis on relationships, Facebook is adding some new celebratory tools under the moniker "Good Adds Up".

First off, they're launching a launching a new personalized video tool "to celebrate bringing the world closer together".

It's a fairly basic message, similar to Facebook's various other auto-generated compilation posts, celebrating the connections you've established on the platform - you can check out your own here.

Amplifying those community-building aspects will be a key focus for The Social Network moving forward, amidst criticism that the platform actually strengthens division, as opposed to bringing us closer. Providing a platform is obviously a key element in enabling connection, but Facebook's system, which is designed to show you more of what you like (i.e. more of what you agree with) could actually have negative connotations in the same regard.

Since the 2016 US Presidential Election, Zuckerberg and Co. have been made acutely aware of this, and they're taking measures to curb such shifts, and enhance connection. But given the very model of the News Feed algorithm, it could be a significant challenge.

In addition to the video, Facebook's also providing a new message to those who react to posts in a positive way.

"After someone reacts to a friend's post with Love, wishes someone happy birthday or creates a group, they will see a message in News Feed thanking them." 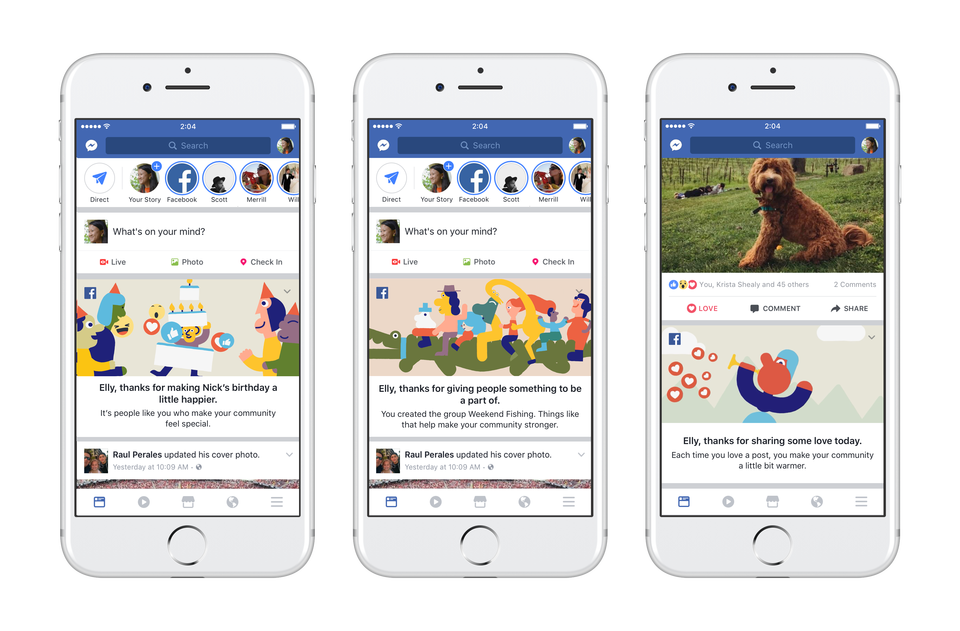 Further underlining the positive message, Facebook says that each day, more than 175 million people share a Love Reaction, and on average, over 800 million people Like something on Facebook. Previous stats have shown that the Love Reaction has been the most popular of the new response options, accounting for more than half of total Reactions use, though that doesn't necessarily underline Facebook's platform as a positive space. But it's something, I guess.

It's an in interesting position for Facebook to be in right now - the most popular social media network in the world, one of the most influential media platforms in existence (if you want to call it that). And with that expansion, it's now also in the position of influencing human behavior on a broad scale - which, on paper, seems great, enabling greater connection, removing borders, connecting the world.

But it also makes it a prime target for manipulation and misuse, and Facebook's industry-leading News Feed algorithm, which has fuelled the platform's astronomical growth, actually facilitates just that.

How can the company reduce the influence of the system that's made it so successful in order to facilitate more open communication? Is that even possible?

In some ways, it seems that the focus on community will be little more than a distraction, a PR front while Facebook itself continues to offer targeted advertising and filter-bubbles to further its interests, enhancing the very divisions that they're speaking out against. But maybe, there's a way they can do both.

What that system is, we haven't yet seen. But one thing's for sure, Facebook's growth, and influence, is not easing up any time soon.