Facebook has released its Q1 2017 results, and once again, The Social Network has a lot to celebrate.

First off, on active users - Facebook is ever-close to the two billion user milestone, with monthly active users (MAUs) rising 17% YoY to 1.94 billion. 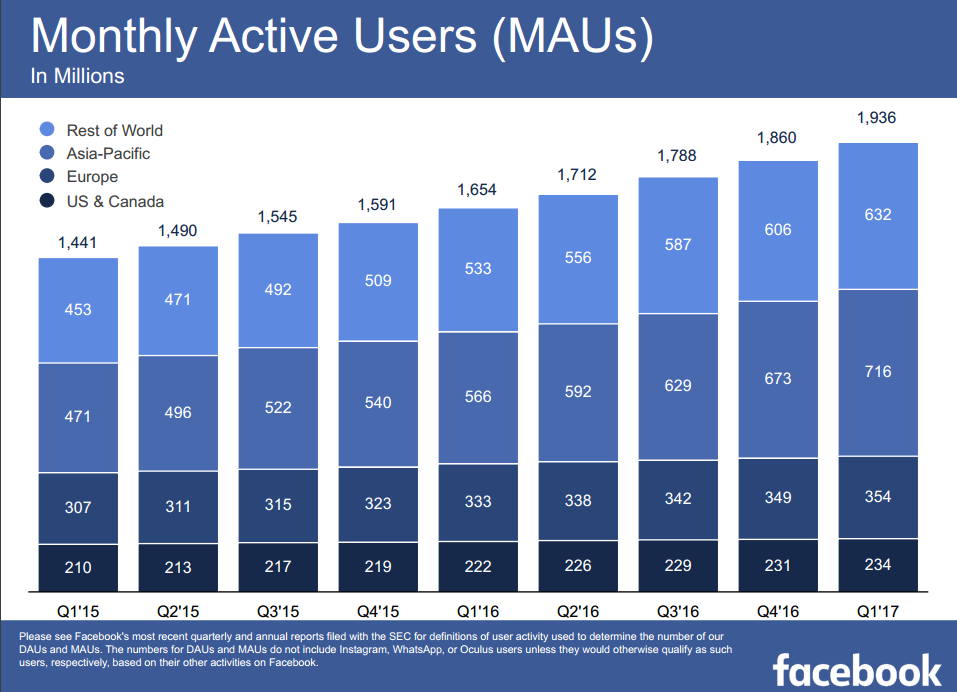 That's another amazing result for Zuck and Co. - Facebook's added another 76 million new users since their last earnings result, in which they'd already added an amazing 3.91% more users on their preceding status.

The growth of Facebook is unprecedented, so much so that it's easy to overlook how significant that expansion is. Pinterest, for example, only recently hit 175 million total MAU, Instagram just reached 700 million and Twitter celebrated adding nine million more MAU in their most recent report. Each platform has its own reasons and situations to take into account, but Facebook's comparative, consistent performance in this regard is amazing - and even moreso when you take into account their daily active user count, which also increased 18% YoY. 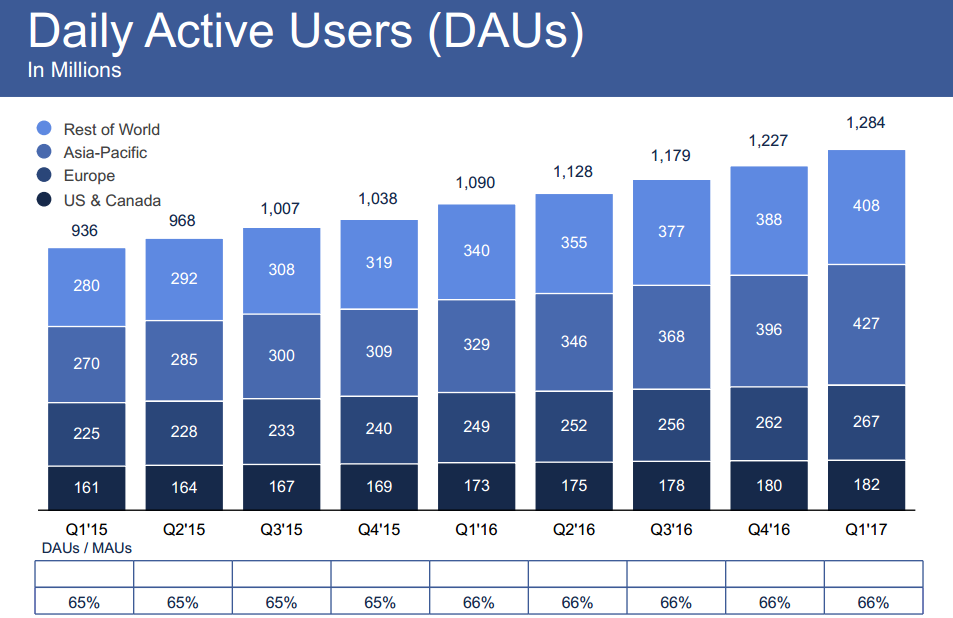 An interesting addition this time round in Facebook's results is the annotation along the bottom, displaying the percentage of daily and monthly active users. This shows that just as Facebook continues to grow, the amount of usage is moving in-step - people aren't simply signing up for the sake of it, the number of daily users has remained steady just as the total MAU has increased.

Looking at the two charts, Facebook's seen the most growth in the Asia-Pacific region, with almost double the amount of MAU growth over the next nearest region - and more than double in DAU figures. Facebook's been putting more focus on areas of lower connectivity in recent times, including the expanded availability of Facebook Lite and the introduction of a lower data version of Instagram, which they announced at their recent F8 conference.

The latter is particularly important in considering the competition from Snapchat - thus far, Snap Inc. has solely focused on developed markets, which has given Facebook an opportunity to reach more users with their similar features, giving them first mover advantage despite copying Snapchat's tools.

On Snapchat, in the accompanying earnings call, Facebook CEO Mark Zuckerberg noted that their Snapchat Stories clone within WhatsApp, their re-vamp of WhatsApp Status, is now being used by more than 175 million users every day, which is more than Snapchat's daily usage. WhatsApp's not as widely used in western markets, but as you can see from this chart (from 2015), it's hugely popular in other regions where Snapchat is notably not present. 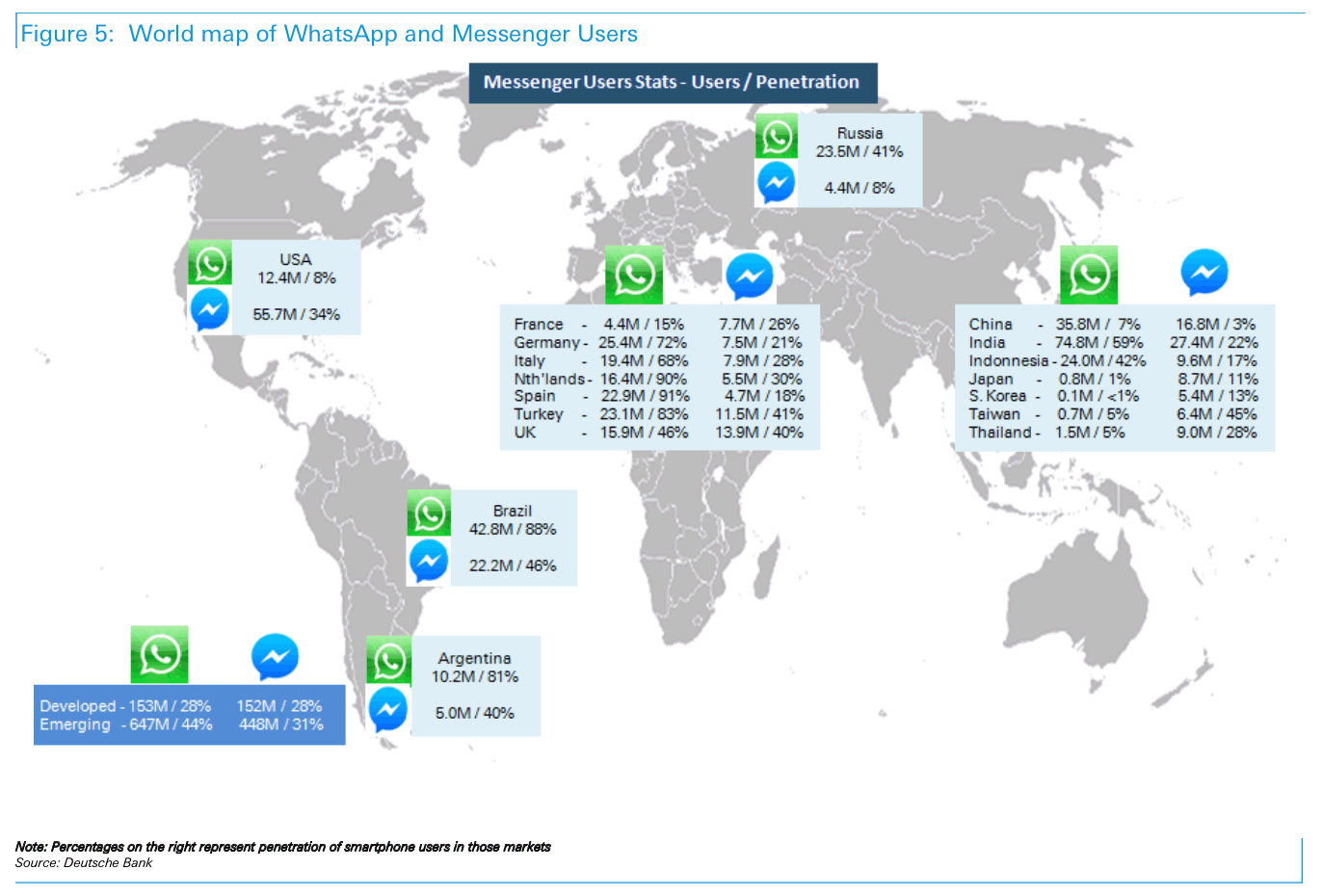 The success of WhatsApp Status further justifies Facebook's 'conquer by copying' efforts, and while Zuckerberg didn't provide any oversight into Facebook Stories use, given the relative take up of both Instagram Stories and now WhatsApp Status, I wouldn't be so quick to write the option off just yet.

Zuckerberg also noted that while they were a bit behind the visual social trend, he believes they're now in the drivers' seat, in terms of technology and advancement, pointing to the recent launch of their new Camera Effects Platform to open up the opportunities of augmented reality to more developers. Zuckerberg also noted that AR could facilitate new ad options in future, including overlays on real world objects and scenes, something Snap Inc. has also been working on for some time. 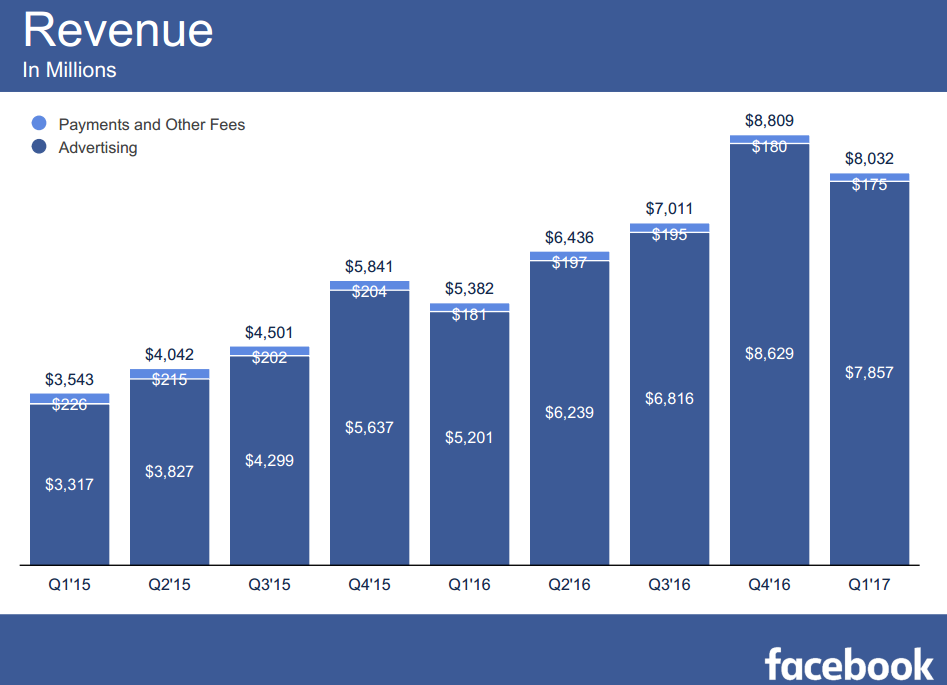 Again, the Asia Pacific region was where Facebook saw the best results, with all other regions declining on last quarter numbers. 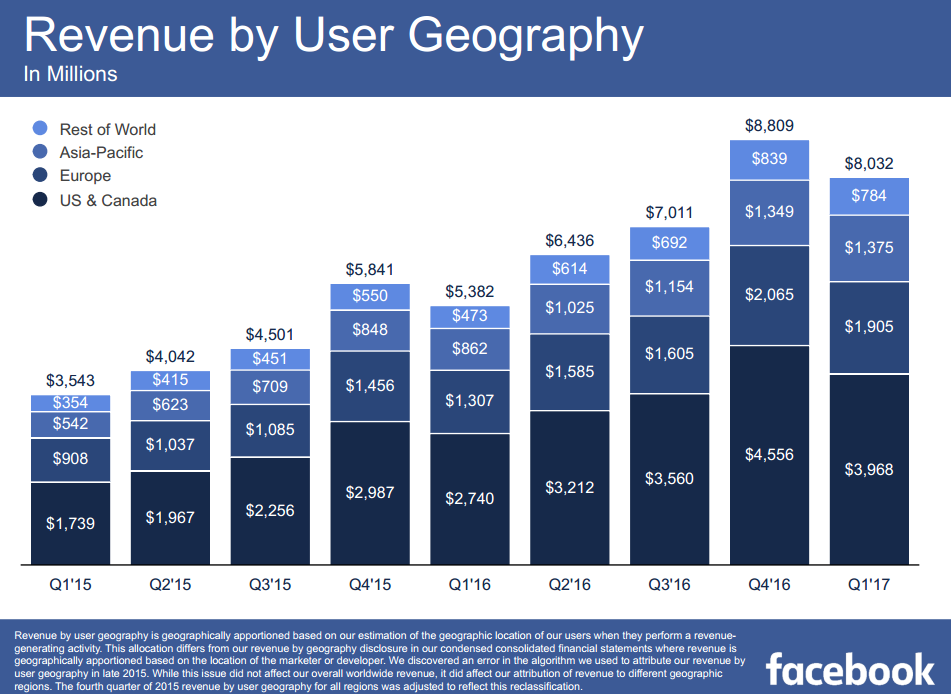 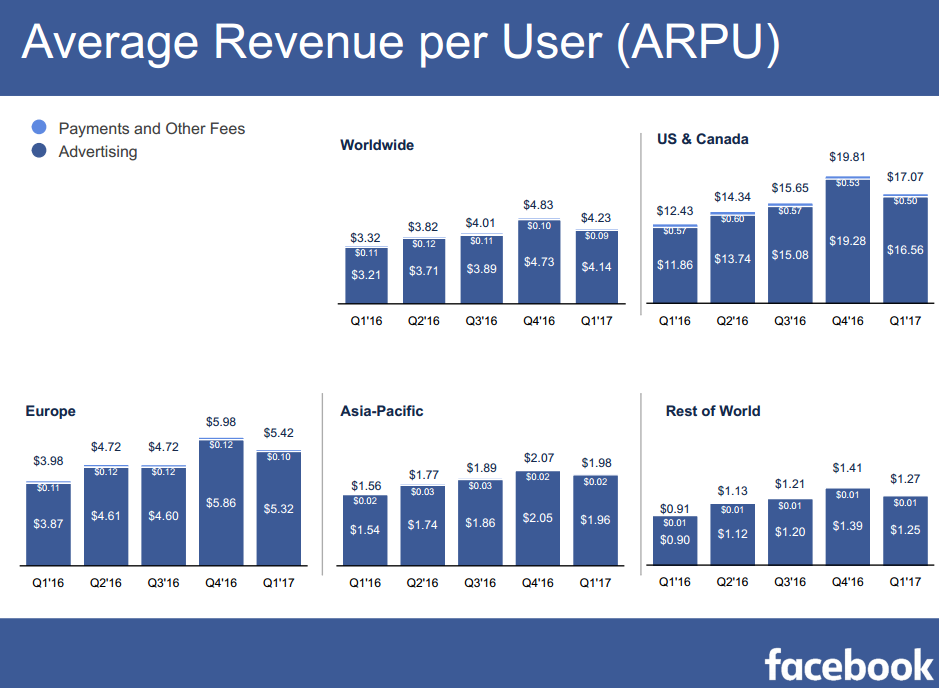 Facebook has previously warned of a "meaningful slowdown" in revenue growth as it reaches the limit of ad content it can show in the News Feed, but the company has laid the groundwork for significant future revenue expansion from Instagram ads and monetizing video content, which should boost momentum moving forward.

Also worth noting - mobile advertising revenue represented 85% of Facebook ad revenue for the quarter of 2017, up from 82% in the first quarter of 2016.

And while overall revenue was down on the previous quarter, it is worth highlighting that costs also increased, with 'Research & Development' seeing a significant boost in expenditure. 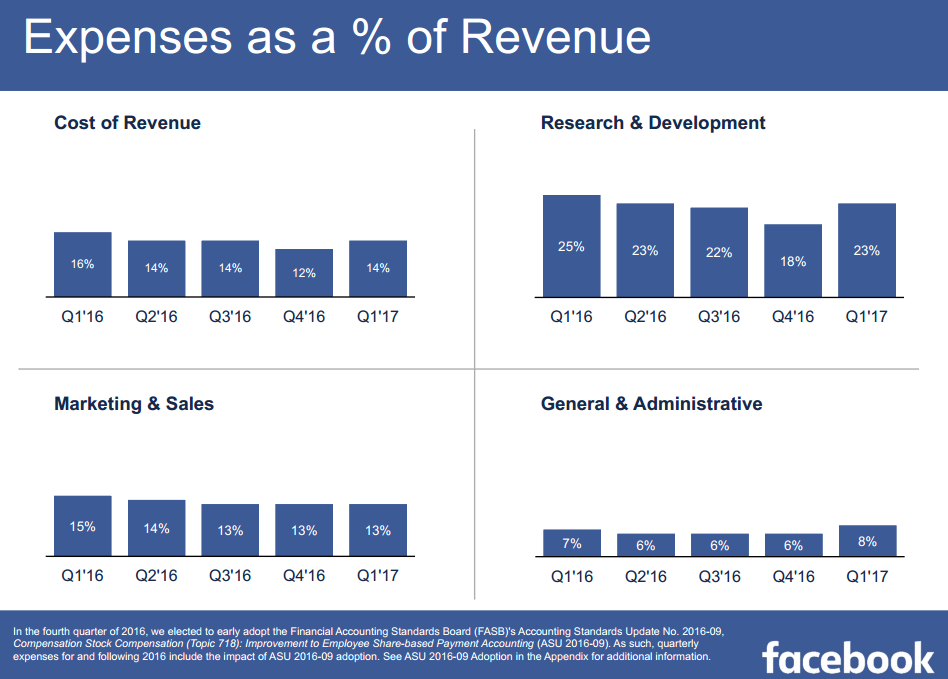 TechCrunch also notes that Facebook had to pay $300 million to Zenimax after losing a lawsuit about stolen intellectual property relating to Oculus.

Despite the various challenges, Facebook remains in good shape, and the ongoing user growth - which also included them adding three million new users in the North American market - should quell any potential concerns. Facebook has refined their approach to product developments and roll-outs, and despite adding a range of new tools in the quarter (including Facebook Stories), and battling concerns about fake news, they've managed to bring more people into the fold - and a lot more people at that.

At nearly two billion users, Facebook's influence and role within our interactive process is undeniable. And it's still growing, it's still getting bigger, and more people are using their apps every day.