There's a couple of interesting updates in the works at Facebook which have the potential to provide a whole new way to communicate your messages on the platform and gain more attention.

And while, in themselves, they may seem minor, the current forms of these projects establish the building blocks for a range of additional opportunities that could, eventually, change the way you approach your Facebook posting process.

The first is a new multilingual composer which enables people to translate their posts into other languages easily. 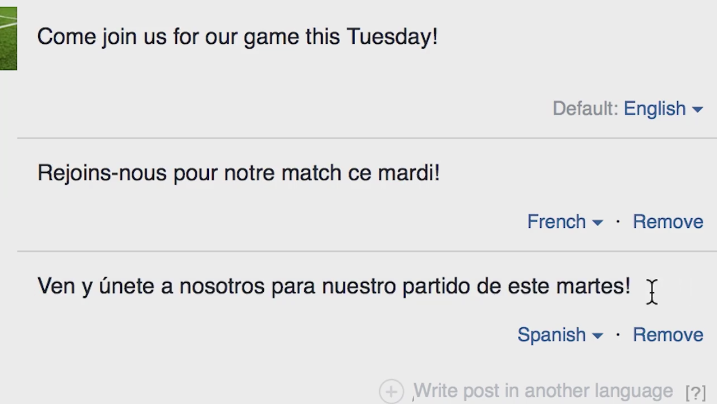 Once you've entered in the various languages you want to use, Facebook will then display your message to users in the language they speak.

"With the multilingual composer, Page authors and people can compose a single post in multiple languages, and viewers who speak one of those languages will see the post only in their preferred language. This enables diverse audiences to more easily interact with the Pages and people they follow."

This isn't totally new - Facebook made this capacity available to Pages earlier this year (Facebook says the function is being used by around 5,000 Pages to post nearly 10,000 times per day on average), but it's now being rolled out to personal profiles via a small test group initially.

There are several benefits to this.

First, the new composer translation process actually uses automated translation to convert your original message into the language/s you choose.

"To help authors create multilingual posts, we're testing a pre-fill feature that takes the first message composed and uses machine translation to pre-fill the messages in the additional languages selected. Authors can use the translations as a starting point for their own translations in other languages, or use the provided version as is."

That's helpful, but it'll be even moreso if Facebook can refine the accuracy of their automated model - a big part of the benefit of multi-language posting could lie in being able to reach more people with your content, in languages you don't necessarily speak yourself. And while it's unlikely that Facebook's automated translation will ever be 100% accurate, if the accuracy level is high enough to be relied upon, it could give Pages a whole new way to reach a larger audience.

In its current form - with the content being shown in the native language of the viewer - the option will be a helpful tool for those looking to reach people in different markets.

Interestingly, Facebook notes that the biggest challenge of this process was in identifying which language to display the content in to each user.

"We use several signals to determine the most relevant version of the post to show each viewer, including the language preferences and the locale that people selected for their accounts, as well as the language they most commonly post in. If there's no match between the languages the post was written in and the viewer's preferred language, then we show the author's first message as a default."

Facebook sees this as a new opportunity to help better connect the world - and really, given the possibilities of such applications, particularly in automated translation, the potential is significant.

The second update enhancing feature being tested is Markdown formatting, enabling you to use options like bold, italics and headings in your updates. 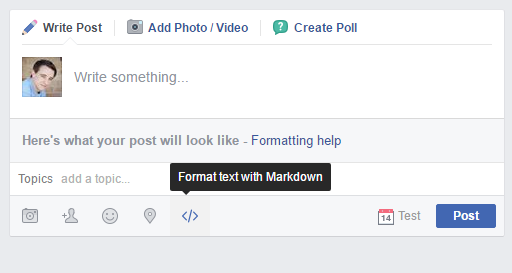 The option is currently only available when posting on event pages, but as you can see, Facebook provides a range of new presentation functions which you can use to customize your text. 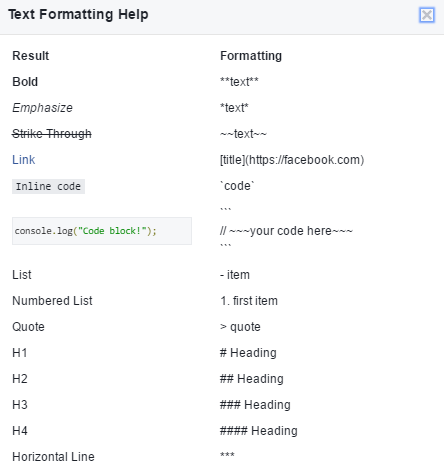 As you apply each to your update, Facebook displays how the final, posted text will look in a window below the composer. 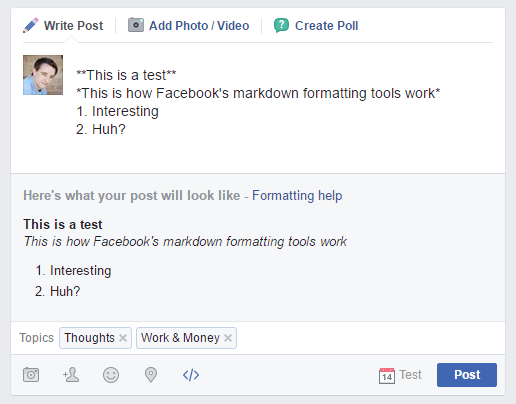 The new formatting options have been floating around for a while (some people have had access to them since March), though we've been unable to confirm whether they're available to all users.

And while Markdown formatting is only available in events listings right now, it could be a trial run ahead of a wider roll-out in future.

If the tool were to be made available across all composer options, that could lead to a significant change in the Facebook posting process.

As always, Facebook's constantly refining and developing their products, and there are always tests in progress - some of them become new options, some of them don't. And while it's a pretty safe bet that language translation will remain a key part of the platform, the Markdown options present a different challenge and could have a more significant, immediate impact on the wider Facebook process.

But whether you utilize these tools or not, it's interesting to see where Facebook's attentions lie in this regard, what projects they're spending time and money on and what challenges they're seeking to solve. In the case of translations, that aligns with Facebook's wider mission to connect the world, while with new formatting options, Facebook's clearly looking to provide additional tools and functions to help creators generate more interest and engagement.

It'll be interesting to see what the next evolution of each option becomes.