As noted by the CEO of Blab Shaan Puri in a Medium post yesterday:

"Today is the last day of Blab. We're shutting down the website and app, and focusing 100% on our new project."

Now, if you go to Blab.im, you'll see this message. 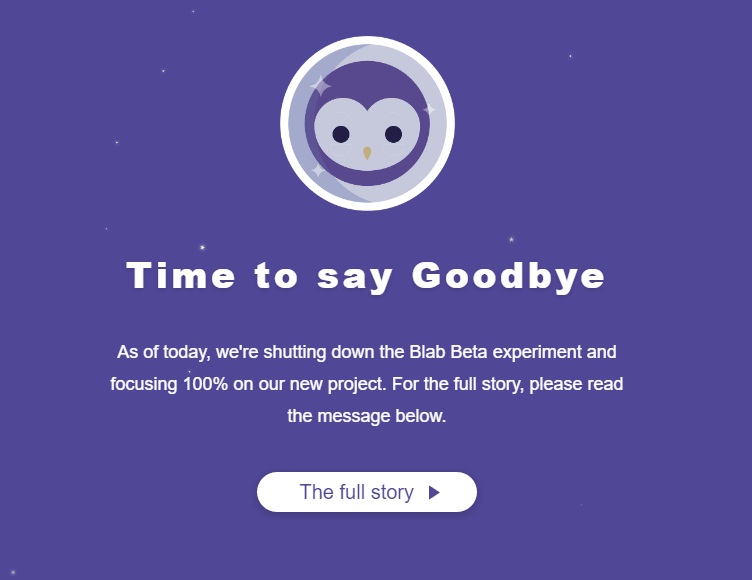 It's a sad end for the multi-participant live-streaming app which quickly gained traction when it launched last April, particularly amongst social media marketing folk. 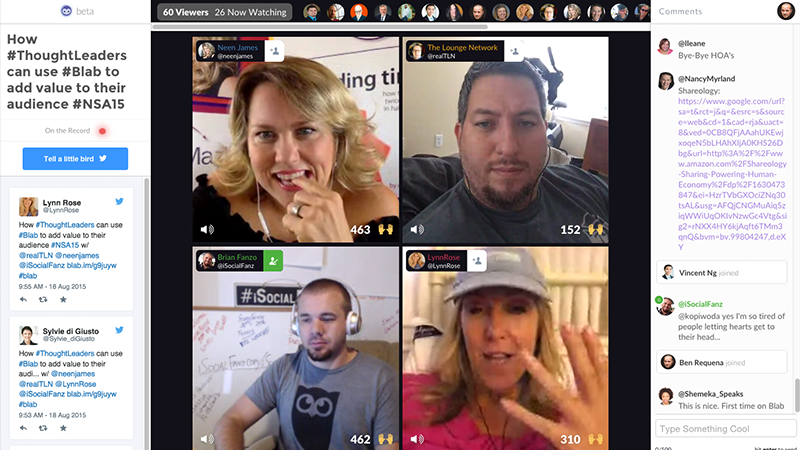 For those unaware, Blab enabled users to live-stream with up to four people participating at any one time (as per the image above). Via later updates, Blab also enabled screenshare tools and advanced options that made it more functional, better for presentations and group chats around events or specific topics. 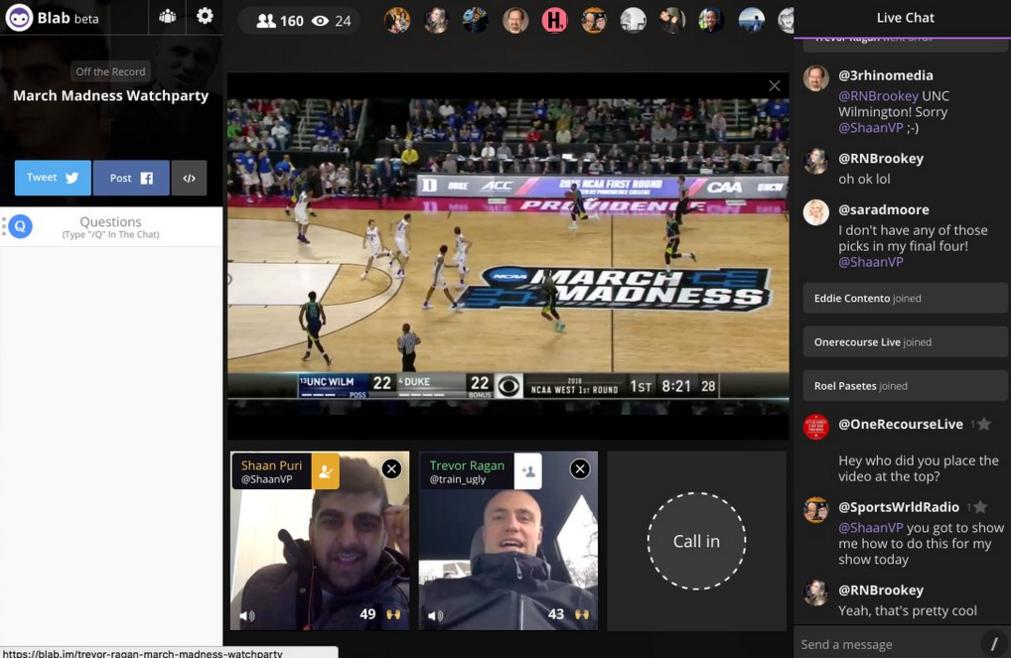 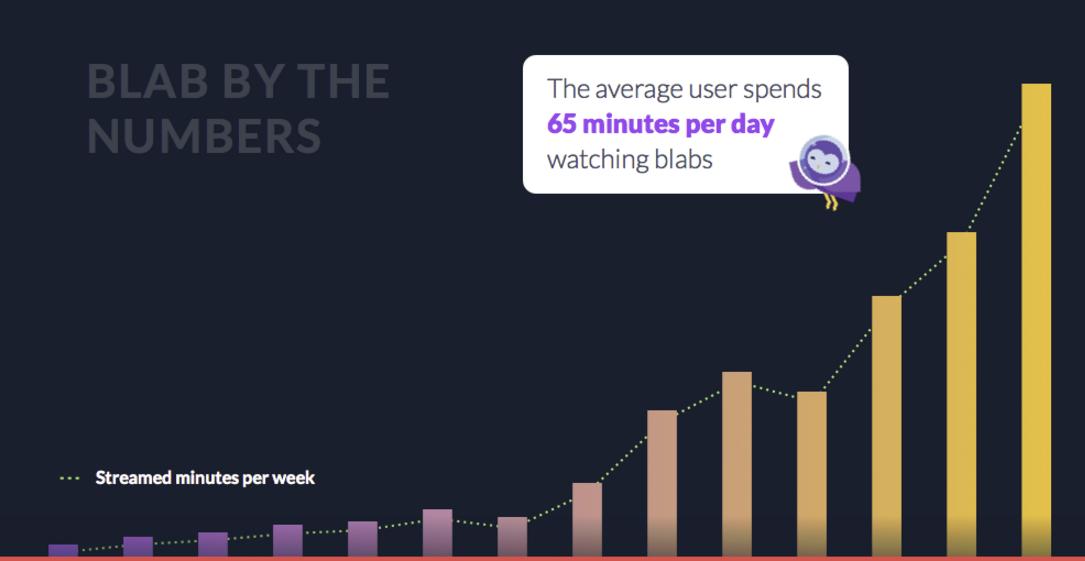 Those are relatively solid user numbers - so what happened?

According to Puri, Blab fell victim to the core problem that plagues most live-streaming apps and tools - that, in Puri's words, "most live-streams suck".

Puri notes that of those 3.9 million users, only around 10% were coming back to the platform on a regular basis because most live streams simply aren't interesting enough for people to stop what they're doing and tune in.

This is the core issue that all live-streaming providers face, that providing the platform itself is not enough, it's the entertainment factor that keeps users coming back.

And most normal people just aren't that entertaining, or their entertainment appeal only stretches to a small, niche audience, which is not enough to support such a platform.

Back in August we published a post which touched on this issue, citing our own research which indicated that despite Periscope having more than 10 million users signed up, only 2.83% of their user base was actually, actively broadcasting, leaving the other 97% of their users as viewers only. That seemed like a crazy imbalance, but subsequent studies supported those findings - research conducted by Horizon Media in April last year found that only 20% of respondents had any interest in using Periscope or Meerkat; a report from BGR found that, despite all the hype around it, Meerkat, before its decision to pivot, never got close to cracking the top 100 downloads in the US iPhone download chart

Meerkat founder Ben Rubin, as part of his announcement that Meerkat would be shifting focus away from live-streaming, noted that:

This is the exact same issue cited by Blab, and that then causes a re-think of what live-streaming is actually about, where the offering's actual value lies. Is it in the function, giving people the capacity to live-stream whenever they want, or in the output, providing content that people want to watch?

Again, as summarized by Rubin:

"Our assumption was that by reducing broadcaster's cost to broadcast to zero (no equipment, etc) we would be able to create a whole new class of live broadcasters like YouTube did with video and YouTubers. One thing we have learned is there is a very high emotional cost to being entertaining in a live format, and bringing on enough of a live audience to make it worthwhile is challenging too."

This is why Facebook and Twitter are shifting gears on live-streaming and focusing on signing deals with major TV publishers - while the novelty of giving everyone in the world the capacity to broadcast themselves at any time is interesting, the real money lies in gaining viewers, sharing interesting, valuable content that will bring in an audience. Once you've got an audience, you can monetize it, which supports the business case for live-streaming - but without an audience, in simply letting users share live content amongst themselves, the function is little more than a new camera option. Outside of on-the-spot video content from major events or incidents, there's little real value to live-streaming from the common user.

On one hand, that suggests that live-streaming may not be worth the effort - but that's not true, if Facebook and Twitter can broadcast significant live events and TV programming, they can transform their platforms into genuine TV alternatives, which could then, by extension, provide a platform for really great live-streamers to piggy back off of. If you could create your own, compelling live-stream show that would air on the same platform as a related live event, you could gain audience by appearing alongside that content in people's feeds, which could then, over time, boost the value of the option for users looking to use the platform for exposure.

And if the majors can turn live into a genuine TV alternative, the benefits are huge - you might one day soon be tuning into Facebook to watch the new Facebook Breakfast program, Twitter's foray into live sports could see users opting for the participatory value of having the content and conversation all in one stream over traditional broadcast options.

There are plenty of major and significant opportunities for live-streaming, but it will take time, and it'll take, most importantly, compelling, entertaining content.

As noted by Puri, most people don't come back to live-streaming because it's simply not that interesting. That's the key challenge all live-stream platforms need to face.

For Blab, Puri says they're re-focusing their efforts on communication instead of broadcast:

"Blab was great in many ways, but it wasn't going to be an everyday thing for millions. So we're kicking down the sandcastle, and re-building it as an 'always on' place to hang with friends."

What that means, exactly, is unclear at this stage, but it'll be interesting to see what steps they take next.