What to do about Twitter, the platform that everyone references but (seemingly) no one actually uses.

This week, Twitter announced a new Explore tab to help people find the best tweets - replacing Moments, which had been given prime position in the app. 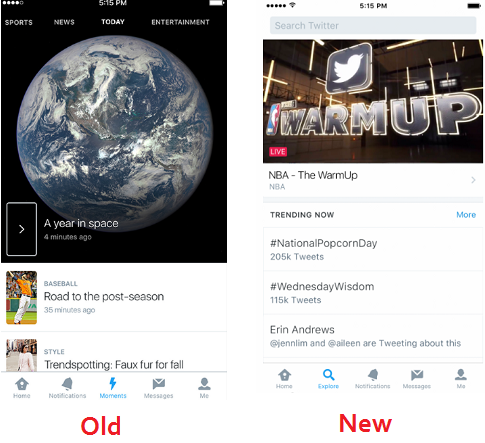 The move effectively reduces the relevance of Moments, which the platform had once seen as their great hope at fixing their core problem - that being that Twitter's hard to understand for newbies, which has limited growth.

The new Explore, meanwhile, is their next solution, showcasing all the best live video, trending content and Moments - in that order. Twitter says their tests showed this new option was a better way to highlight the best tweets have to offer.

"Over the past year, we've been exploring different ways to make it simpler for people to find and use trends, Moments, and search. During our research process, people told us that the new Explore tab helped them easily find news, what's trending, and what's popular right now."

Except, it's not really. As noted by M.G. Siegler in his post on the change:

Okay, maybe I wouldn't got that far, but Siegler does make some excellent points in his piece - most notably, Siegler says that Twitter is such a great resource for trending news and content, yet the new Explore only offers a very basic discovery tool, with no personalization or built-in smarts.

And he's right, there's so much available in Twitter, so much real-time, active conversations of relevance that Twitter could use its systems to uncover and highlight. This is probably the most frustrating element about changes like this, that Twitter could do more and provide a better experience.

How do we know Twitter could do more? Because other, more effective, more personalized platforms, have been built using Twitter data.

I'll give you an example - Nuzzel is one of my go-to Twitter tools, something I check every day, because it highlights the key topics of discussion amongst my network without me having to sort through it all myself. 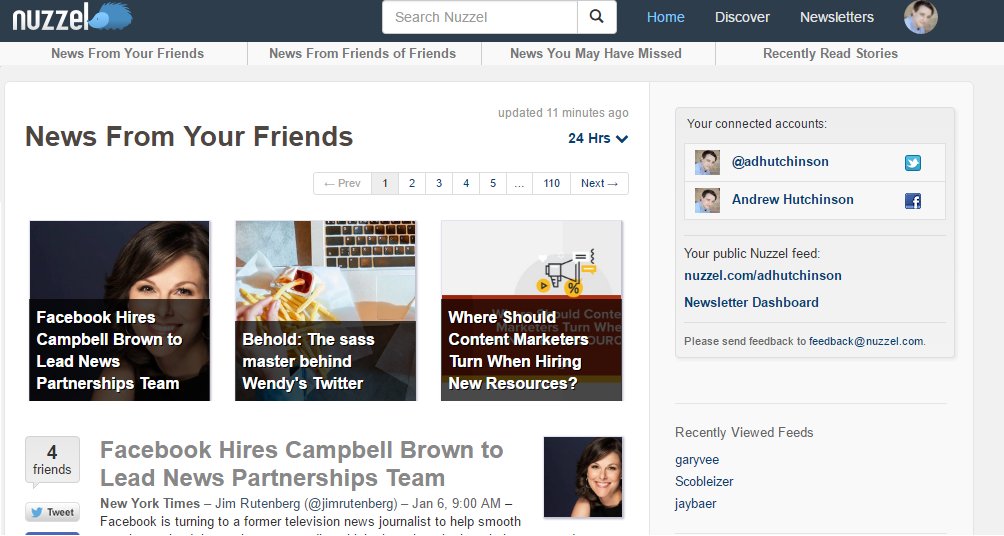 How Nuzzel works is it analyzes your network - the people you've chosen to follow - then it pulls out the most shared content among that list of users and shows you what's trending. Simple. Stupidly simple, really. But it works.

I've noted several times that Twitter should purchase Nuzzel and integrate it into their app, then use that to make their own recommendation tools more effective.

The full image is a bit hard to see, so I'll below up each element - first the right hand side. 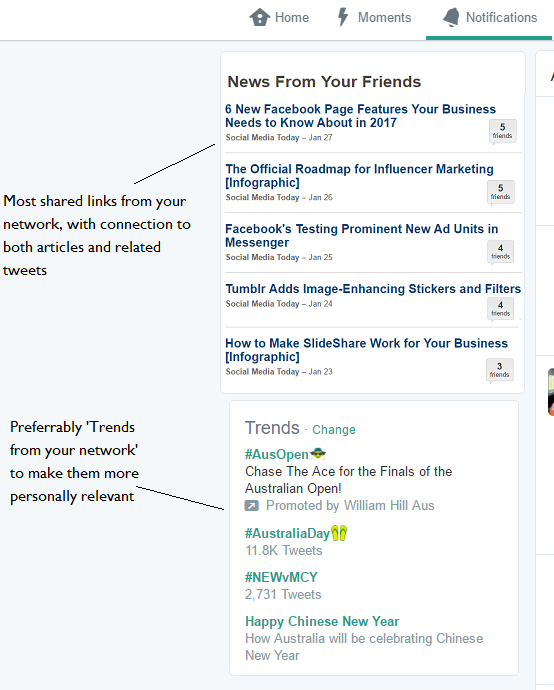 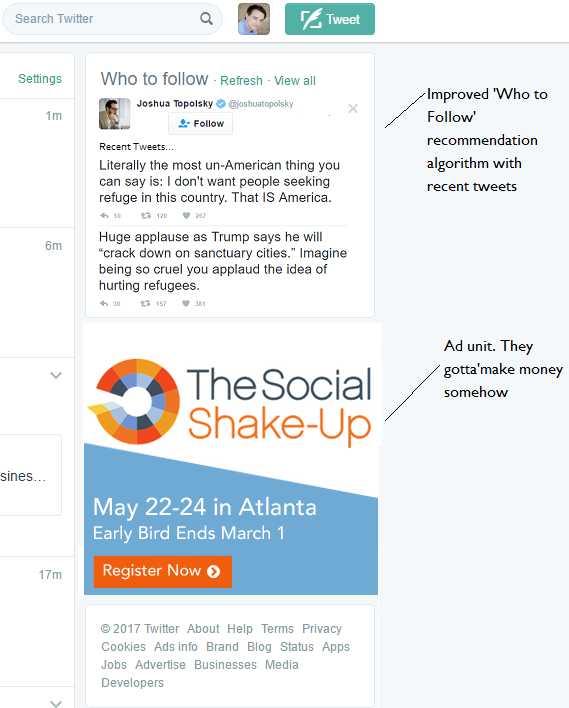 Now, this is the desktop version, of course, and most people access Twitter via mobile, but you could adapt the same functionality to mobile, shifting the 'News from Friends' over to 'Explore' as the first thing on the list, etc.

As you can see, immediately you get an understanding of the key topics of focus amongst the people you follow, with links to the relevant tweet conversations. In my opinion, that increases Twitter's value immediately, while it also gives users more motivation to cull their following lists down to the people they're genuinely interested in to improve the focus. Doing this should ultimately increase engagement, as you're incentivized to make Twitter more engaging for yourself (rather than simply chasing follower counts)

Trends needs to be more personalized - part of the problem with 'Explore' is that it's just Trends on a new tab. Not improved. Not more targeted. Twitter CEO Jack Dorsey has noted that this is something they're looking into, but even if you were to use a similar model to Nuzzel, you could detect the top trending hashtags from each users' network and highlight them here, immediately making them more relevant.

The risk with this is that if your connections are always talking about the same topics - for me, #socialmedia would be high on the list - then those same trends would keep coming up every single day. But Twitter could build an algorithm that detects fluctuations above normal levels - so if everyone was always tweeting about social media, that wouldn't make my list, as it'd on par with normal levels. But if there were a sudden spike in any new tag, that would be highlighted. Facebook does this with their monthly 'Topics to Watch' reports.

On the other side, you could improve the 'Who to follow' recommendations by highlighting not only profiles, but what they tweet about.

At present, 'Who to follow' is too unfocused - for example, 90% of my tweets are about social media and digital marketing, yet if I engage with my friend, who's a massive Chicago Bulls fan, just a couple of times in a week, my 'Who to follow' tab quickly switches to a range of Bulls-related accounts.

It is getting better, but it would be good to have some additional context - maybe highlighting each users' top tweets would help, though admittedly this does make the screen space more crowded (less of a concern on mobile, where it would have its own section).

I've even added in an ad unit for them - and if they could improve their targeting in the other sections, these ads could be increasingly focused and relevant.

As noted, this sample does look crowded - and my novice design skills probably don't help - but you can see how just a few changes could make your Twitter experience more compelling, could provide you with links to content you really want to see.

Of course, it's easy for me to say this, I'm not on the Twitter Dev team who'd have to make this actually happen, but the idea here is to highlight that such tools already exist, there are already apps built on Twitter data that provide more targeted, focused functionality.

Twitter CEO Jack Dorsey did recently ask users for recommendations on what they'd like to see improved, and he made specific note of more focused alerts and topic options.

@PeteHeacock been thinking a lot about this. More topic focused v account generally

So this is something Twitter is aware of, something they are looking at.

It's all possible, the capacity does exist. Let's hope Twitter can make explore into a more valuable option, and maximize the capacity of the platform as a more individually relevant news source.