If there's anything you can rely on in the modern social media landscape, it's that Facebook is going to copy Snapchat. Likely till the end.

Back in May, Snap Inc., the parent company of Snapchat, released their first ever performance report as a listed company, noting that while user growth had slowed, engagement was increasing.

"Chief Strategy Officer Imran Khan noted that users are now active in Snapchat for over 30 minutes per day, which is up from the '25 to 30 minutes' stat it listed in its IPO documentation."

This was also just after Snapchat had released their Magic Eraser tool - which prompted me to tweet:

It took a little more than a week, but effectively, this is what Instagram has done. They did release a tool called 'Eraser Brush' a few days later (though not the same functionality as Snapchat's tool), and now, on the one year anniversary of the release of Instagram Stories, they've reported that users under the age of 25 are spending 32 minutes per day in the app, up from 21 minutes per day at last official report.

Video by @100Soft A year ago today, we brought stories to Instagram and quickly saw a shift in how people share their everyday experiences with their friends and followers. Our community had an entirely new way of sharing not just life's highlights, but the in-between moments that bring us closer. Your stories have brought us behind the scenes, from your dog's terrible haircut to videos from last night's concert. Thanks to our growing community of 250 million who are sharing these experiences with us every day! Watch our Instagram story now to see some of our favorites from the past year.

Instagram has released a range of stats to mark the occasion, including the most used Stories hashtags, the most popular stickers and the most commonly applied location tags. Oh, and also, the most popular face filter is 'puppy ears'. Which they also copied. From Snapchat. 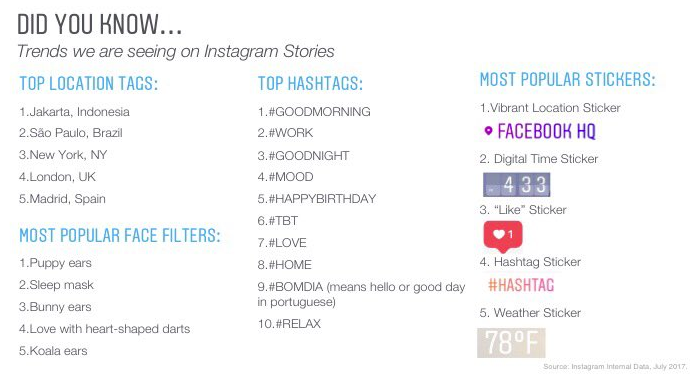 Instagram has also noted that half of the 15 million businesses now active on the platform have also produced a Story in the last month. This is in line with a recent study by social analytics company Klear, which found that 45% of the brands in their study of 150 major brands were now using Stories to boost their on-platform messaging. 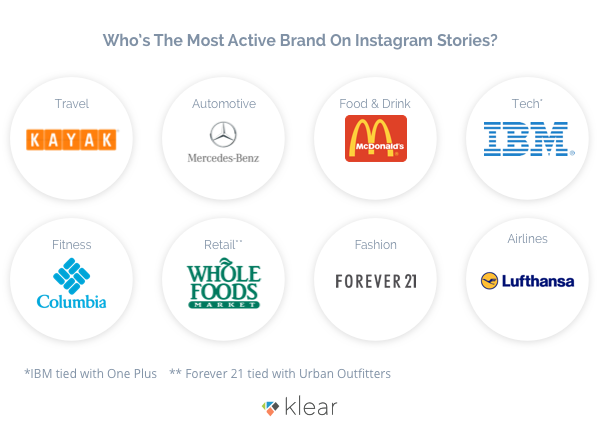 By any measure, you'd have to say that Instagram Stories has been a success.

While it seemed somewhat shocking at the time of launch that Instagram - and parent company Facebook - would so blatantly copy Snapchat's format, Facebook had actually been trying to replicate it for some time, with standalone apps like Poke and Slingshot failing to gain any real traction.

After repeatedly crashing out, Facebook's new approach was to utilize their key strength - scale - and turn that against Snapchat, which had spurned their previous takeover offer. Basically, Facebook sensed an existential threat, with Snapchat usage taking hold amongst younger users, so they sought to nullify it, a logical business move. And with Instagram Stories, they may have worked out how they can do just that.

Of course, Snapchat's not close to fading away just yet - as we noted recently, there's still plenty of potential in Snap Inc. But the numbers are not in their favor at this stage.

Snapchat may still turn that around, but the slowing growth, in alignment with the increasing rate of Instagram Stories usage, combined with Facebook's introduction of Stories-like functionalities into global markets where Snapchat doesn't yet have a presence (through both Instagram and WhatsApp), doesn't bode well for Evan Spiegel and Co.

Snap Inc. says it's a camera company, and is reportedly looking to develop a new version of Spectacles, while they're also said to be in talks to acquire a drone maker. Maybe, by shifting focus to this - as opposed to merely labelling themselves a camera company to avoid the inevitable Facebook comparison - they might be able to get out of Facebook's path. But again, it's a big challenge.

Right now, Instagram's bet on copying Snapchat is paying off, and is working to heap more and more pressure on Snap Inc., which Snap has unintentionally amplified by going public. In line with this, today's Instagram announcement is perfectly timed to pre-empt Snap Inc.'s second quarter earnings announcement next week.

Corporate warfare like this is not unusual - all companies are working to beat out their competitors and protect their market - but it's interesting to see it play out in such an overt, public manner.

But however you feel about Facebook's tactics, it's impossible to deny the potential of Stories, and the opportunity that exists in the option. The numbers speak for themselves - and as Instagram adds new options like links in Stories (currently not available to all businesses) and possibly even Shopping Tags, along with improved discovery, it'll become even more enticing for brands.

If you've not considered Stories for your business, it may well be worth the effort.