Video is the thing in social at the moment. Just over a year ago, Facebook CEO Mark Zuckerberg said that Facebook would be 'mostly video' in five years time, and the advances on the platform ever since have aligned with that theory, most notably with the new and prominently featured video tab which was announced by Facebook earlier this month. And that focus makes sense - Facebook's now serving more than 8 billion video views per day, up from 4 billion this time last year. And The Social Network's not alone in seeing such growth in video consumption - Snapchat went from 4 billion video views per day in September to 8 billion today, matching Facebook's figures. Twitter's reported that 82% of their users now watch video on the platform, with 90% of those views coming via mobile device. Even Pinterest, best known as being a showcase for static images, is now looking into ways to incorporate video content into their offering.

And of course, there's also Instagram. The Facebook-owned image-sharing network recently announced that all users will soon be able to post 60 second videos on the site, in addition to the previously available 15 and 30 second video options.

According to Instagram, the time people spend watching video via the app has increased 40% in the last six months, which, logically, has prompted them to find new ways to facilitate that interest and improve the options, both for creating and discovering video content on the platform. And on the latter, Instagram's today announced a new look for their 'Explore' feature, putting a bigger focus on video content, including a specific and algorithm curated 'Videos You Might Like' feed. 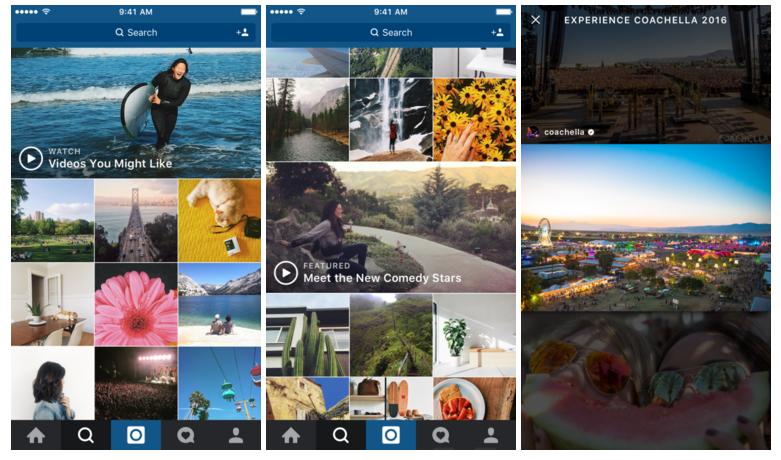 As per Instagram's announcement:

"As people share more videos than ever before, we're making it easier to discover the ones you'll love. To begin, you'll find a personalized channel called "Videos You Might Like" that collects videos from across Instagram's global community into a seamless viewing experience. And as you scroll through the Explore grid, you may also see "Featured" channels filled with videos on specific topics."

As you can see from the screenshot (in the second image), the new video channels are inserted amongst the thumbnails of photo content, making it less intrusive on the user experience. When you select a video channel, the videos within that category autoplay, one after the other, similar to what Snapchat recently implemented with their 'Auto-Advance Stories', and what Vine also introduced earlier this week, via their new 'Watch' button, which enables you to view an entire channel of related Vine videos back-to-back.

While that may seem like a minor addition, people do seem to love autoplay - both Facebook and Twitter have reported significant increases in video engagement since the implementation of autoplay, and stringing together content in this way adds a similar element, enabling users to sit back and watch, and discover new content without having to actively seek it out and/or press play on each new post.

Part of the longer term view for Instagram will no doubt be around inserting ads into these new video channels, providing them with another way to monetize their audience. TechCrunch asked Instagram about this possibility directly, to which they said that have "nothing to share at this time". But such an addition makes perfect sense, and would enable them to add in more sponsored content without impacting the user experience.

It'll be interesting to see how users respond to the new option. If Instagram can keep boosting those video numbers, and find new ways to showcase their video content, that might provide more incentive to creators to post more video content to the platform, making it a challenger for short-form video providers like Vine. Vine, of course, is owned by Twitter, and has Twitter's 320 million users, beyond their own 100 million, to which they can distribute content. But Instagram has more than 400 million users on its own, and Instagram content gets a reach boost on Facebook. You can see how, for creators, Instagram video might prove more appealing, particularly if they can continue that growth in both overall users and on-platform video consumption.

Maybe, the new Explore page is the first step towards that next stage.

Instagram's new Explore tab will initially only be available to users in the US, with a wider rollout planned shortly. To access the new option, you'll need to be using the latest version (7.20) which is available via the App Store and Google Play.