Facebook has today announced its Q3 numbers, with solid results across the board.

That signifies a 4.02% increase in MAUs, quarter over quarter, which shows that despite concerns about Facebook losing touch with certain markets, or hitting saturation point where meaningful growth becomes impossible, the Social Network is still expanding at an impressive rate.

Facebook saw its most significant unser growth in the Asia Pacific, increasing 5.24% on the previous quarter and now reaching 522 million users in the region.

In terms of daily active users (DAUs), Facebook is now reaching over 1 billion users, on average, every day. 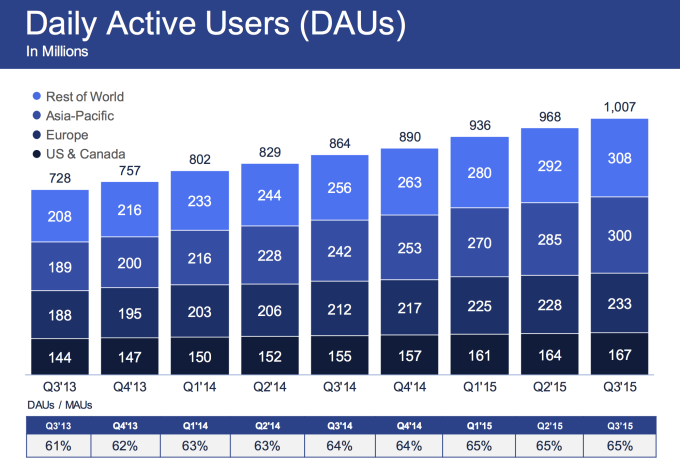 The DAU count is something Facebook values more highly than MAU, and is largely more indicative of the platform's position - the more people relying on Facebook daily and spending more time on the platform, the better it is for Facebook long term. The numbers are also a great endorsement of Facebook's handling of new feature roll-outs and updates, which they've been able to do seamlessly and without alienating their user base. In fact, the numbers clearly show they're on the right path, in regards to delivering what users want - as noted by TechCrunch's Josh Constine, Zuckerberg and Co. even managed to add an additional 4 million users in its money-making core market of the US and Canada. "That means Facebook is still converting holdouts, newly of-age teens, and seniors"

Also worth noting, the Q3 numbers show that more than 65% of Facebook users log-in to the platform every single day.

On mobile, Facebook saw an increase in mobile DAUs of 5.4% - an increase on the last two results: 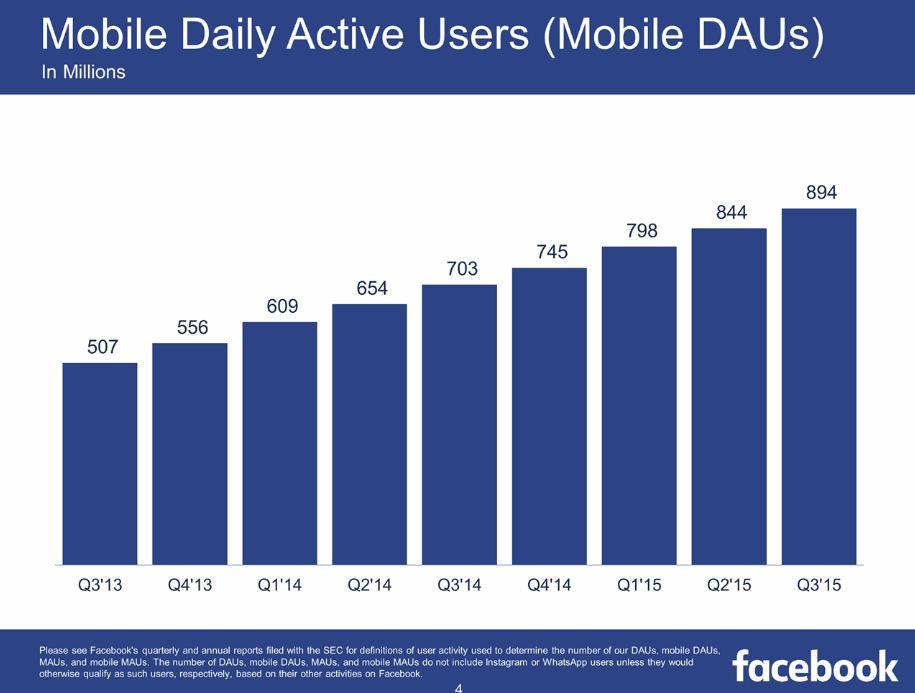 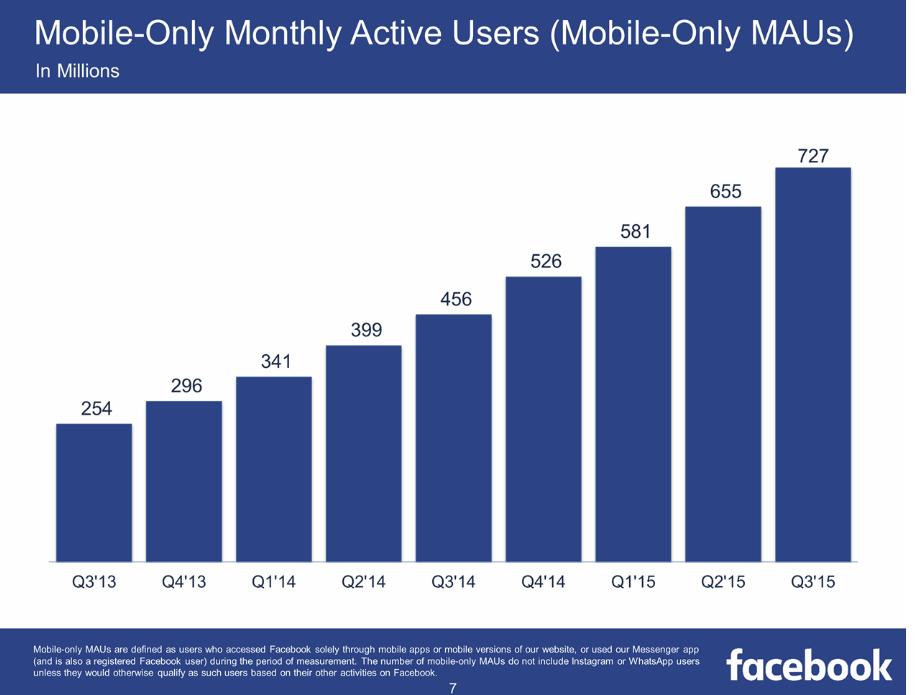 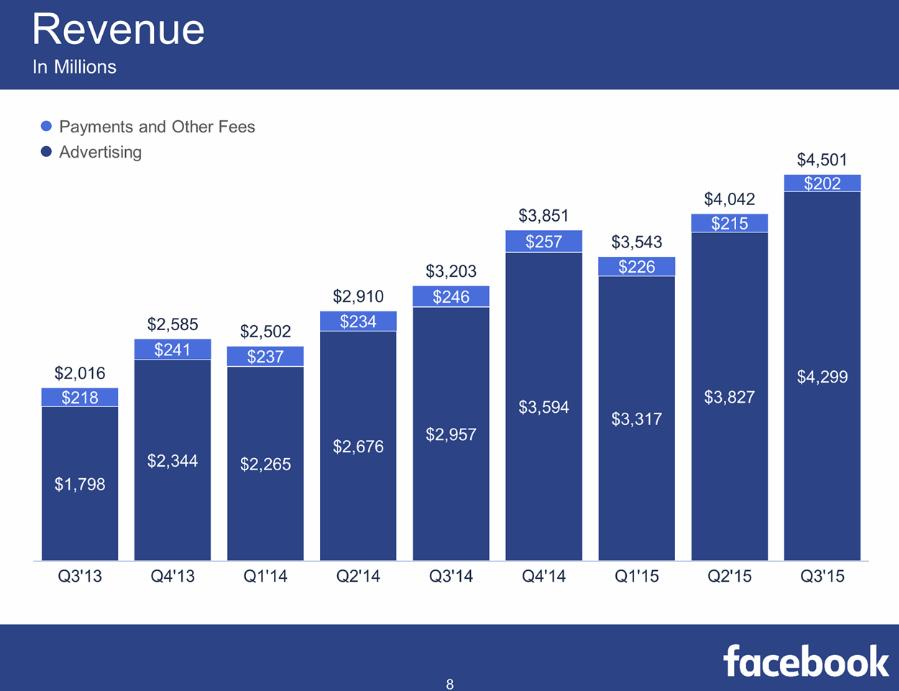 Earnings from the US and Canada lead the way, increasing $289 million on the previous reporting period, with the Asia Pacific region also seeing a boost. 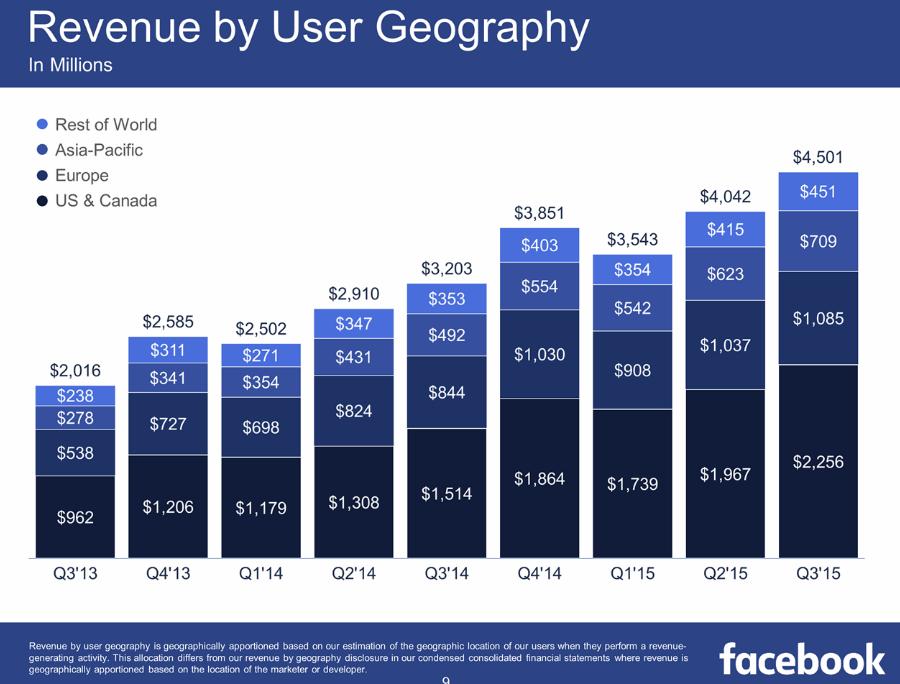 Average revenue per user also increased in all regions: 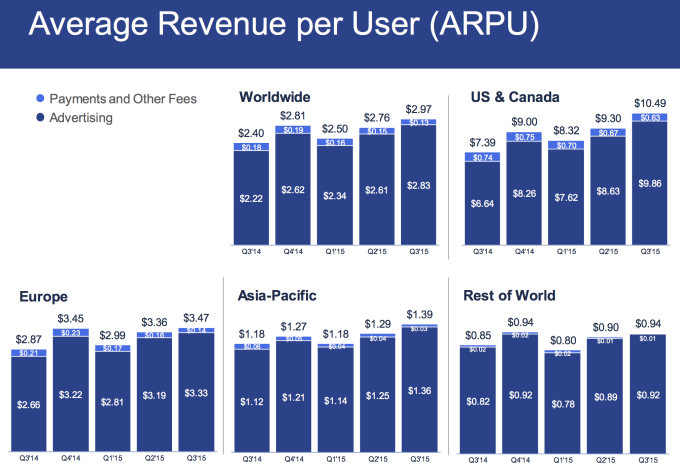 The majority of Facebook's revenue came from advertising, which increased to $4.29 billion - up 45% on the same period last year. Mobile ads accounted for a massive 78% of ad revenue.

On the accompanying earnings call, CEO Mark Zuckerberg said that Facebook is now serving more than 8 billion video views daily - a 100% increase since April, when The Social Network announced it had hit 4 billion video views. That underlines why Facebook has been working on its own, YouTube-like video tab to help users discover more video content (and stay on the platform for longer).

It's another strong result for Facebook, underlining the company's strong position in the market. Already, people have compared Facebooks results to the numbers posted by Twitter, highlighting that Facebook added two million US users in Q3 - more than Twitter's been able to do in the last 6 months. And while that comparison may be somewhat unfair - it's unlikely any network is going to see growth on the scale that Facebook has done - it does go some way towards providing some comparative measure for Facebook's impressive numbers.

Given its growth in developing markets and the expansion of internet.org (Zuckerberg says the initiative has helped provide internet access to more than 15 million people thus far), the future of The Social Network is looking very bright. Add to this the expanded capacity and development of their ad offerings, and their investment in new technology like virtual reality and artificial intelligence, and you can expect Facebook to be playing a significant part in your day-to-day life for some years to come.