As Pinterest works to evolve its visual search options, they're also looking to put more emphasis on their search tools and functions, in line with user demand. Their latest advances on this front see them introducing pinch to zoom, already a common function on many other sites, and moving the visual search button to make it more prominent.

First, on pinch to zoom - exactly as it sounds, you can now pinch on your screen to zoom in on any object within a Pin image.

In itself, this is a fairly basic, yet beneficial, update, but as noted by Marketing Land, Pinterest has plans to use the functionality to further their visual search efforts. For example, in future, when you pinch to zoom on a section of a Pin, Pinterest may use that as an indicator of the product/s you want to search for - zoom in on shoes, like the GIF above, and Pinterest could show you relevant pins related to that segment of the image, helping to connect you to similar products.

Right now, pinch to zoom only functions as a zoom device, but Pinterest is investigating how they can use it as a prompt for further discovery.

The second update relates to Pinterest's visual search tool, which enables users to highlight and search for specific items within a Pin.

"We've made some improvements to the tool based on feedback we've heard from Pinners. We updated the button so it's clearer, especially for people who are new to Pinterest, and moved it so it's a little easier to reach. And it's working too - in early tests of the improved button, nearly 70% more people used the visual search tool."

For comparison, here's the old button placement (left) and new one side-by-side. 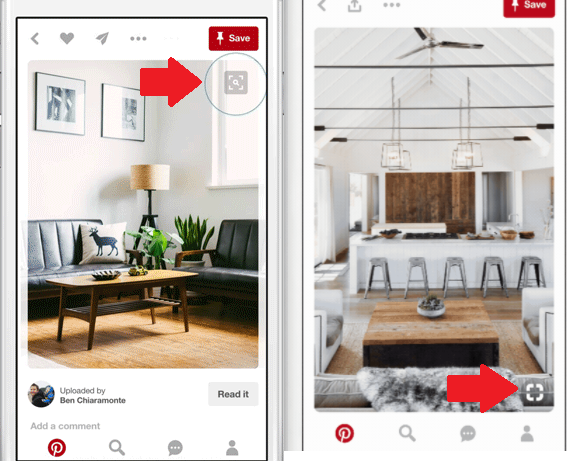 The change seems fairly minor, but as Pinterest notes, 70% more people have used it as a result.

While Pinterest may not be as big as the other social platforms, their eCommerce focus and innovative search tools have helped them remain relevant, forging their own path which is at least somewhat beyond the remit of most other networks. That differentiation is important - while Snapchat moved in and started taking users away from Facebook, platforms like Pinterest and LinkedIn serve their own unique purposes, which holds them in good stead for longer term growth and appeal.

Of course, Facebook's looking harder at its eCommerce options, and Amazon's making its own way into similar territory, but tools like Pinterest's Lens and other advanced search features could help them stay ahead, and enhance their connection with users.

Pinch to zoom will initially be available in iOS, coming to Android soon