The 2016 Emmys were once again a huge event on Twitter, with hundreds of thousands of tweets circulating throughout the night using the hashtag #emmys or #emmys2016 - both of which came with a customized Jimmy Kimmel emoji when applied.

But one element you may have missed was this new image filter option being used by the cast of the Netflix hit "Stranger Things".

Taking to the #UpsideDown at the #Emmys. pic.twitter.com/sjF6ZxEzXG

As you can see, the image addition here isn't a typical sticker, it moves, which is more akin to Snapchat's face-altering Lenses. And while it doesn't scan and respond to your actual face movements, it's a new offering for Twitter, and signals that they too are looking at Snapchat's features and considering how they can be applied to their platform.

To clarify, this image filter was published via an iPad app called Twitter Challenger, which is only made available to VIP users at major events - you can see, via TweetDeck, the app through which this video was posted. 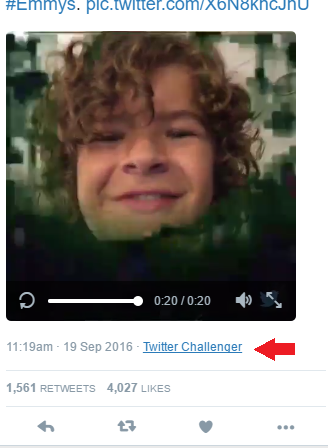 "Twitter Challenger is an app for major live events that allows VIP users to participate in custom "Twitter Challenges." It's designed to capture fun and creative photos, GIFs, and videos to share with fans, with the purpose of increasing exposure and engagement."

Through Twitter Challenger, event organizers can provide attendees with a challenge, normally linked to a hashtag - in this case, the hashtag appears to be #UpsideDown.

The app has been used at various events, including the Global Entrepreneur Summit.

And while the features made available in the app aren't necessarily going to be translated across to Twitter proper, it is interesting to see them experimenting with animated video lenses, and considering how they might be applied if, and when, they are to be made more widely available.

#UpsideDown at the #Emmys. pic.twitter.com/pKH7sq0qpM

The Stranger Things animation appears to be one of the first they've tried, and this would no doubt be hugely popular if it were released to the public. If it generates engagement and interest, you can bet Twitter will be looking to release it more widely, and it's easy to imagine other film tie-ins and promotions where this option could be used.