In their latest effort to stamp out abusive behavior on the platform, Twitter's now reducing the reach of account which are deemed to be engaging in such actions.

According to BuzzFeed, the new process started rolling out last week, with offenders being sent notifications that their tweet reach is being limited. 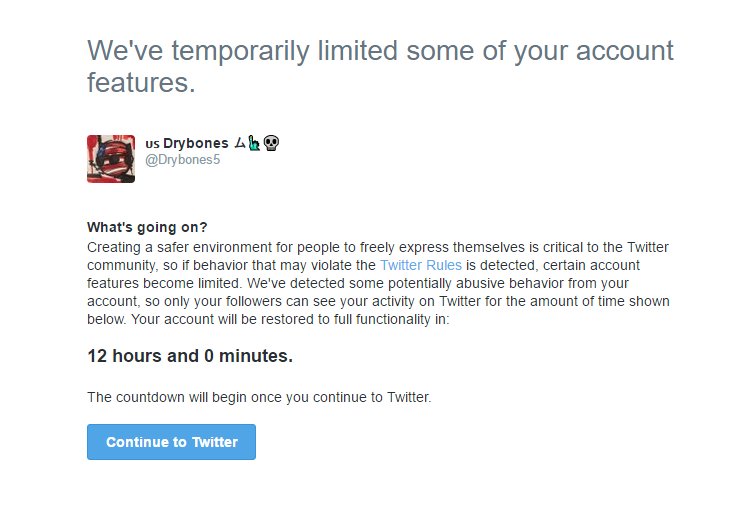 As you can see, the message notes that:

"We've detected some potentially abusive behavior from your account so only your followers can see your activity on Twitter for the amount of time shown below."

In this case, the penalty has been put in place for twelve hours. It's unclear whether there are different levels for certain violations or actions, though the fact that there's a separate breakout for the time, and it's not built into the warning text itself, would suggest that is the case.

The limitation, as noted, means that anyone outside of the user's existing follower list won't see their tweets. This also extends to re-tweets - if someone re-tweets the banned user, that tweet still won't extend further than their followers list.

In terms of what Twitter deems as abusive behavior worthy of restriction, one user claims that he used the term 'retard', while various others have noted they were banned for - as you might expect - political-based discussion. 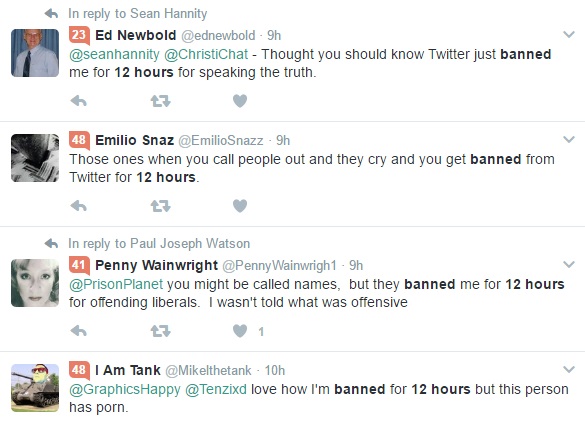 Twitter says the bans may not necessarily be the result of a single, one-off incident, but that they're looking at an accounts behavior more broadly.

The restrictions are one of Twitter's strongest moves yet to eliminate abuse. While the limitations are only temporary, and they enable people to continue using Twitter in a limited capacity, the move shows that Twitter is willing to move away from its free speech, ''global town square ethos in order to tackle one of its most glaring problems.

Of course, once the time limit's up, all the users' tweets come back, so the restriction might not appear to have a huge impact, but it will help limit tweet barrages and give people a moment to re-consider what they're sharing.

A measure that could have more impact would be if Twitter increased the duration of the restriction every time it was imposed on an account, and set a level on how many times the limitation could be incurred before it became a full ban. But then again, the offender could just go start another account - which is another area that Twitter's working to address.

This is the latest update in Twitter's renewed efforts to limit the impacts of abuse on the platform.

At the end of January, Twitter's VP of Engineering Ed Ho announced that the platform would be ramping up its efforts to combat trolls and abuse, noting that they needed to show more on this front:

We heard you, we didn't move fast enough last year; now we're thinking about progress in days and hours not weeks and months.

Since then they've announced a change to enable people to report tweets from blocked accounts, a new 'safe search' option which removes Tweets that contain potentially sensitive content and an algorithm-defined way to order tweet responses in order to hide potentially abusive and low-quality replies.

Oh, and they also announced that you'll no longer be notified when you're added to a list, then reversed course a couple of hours later.

But despite the misstep, it's good to see Twitter taking action to tackle the problem, rather than turning a blind eye. The risk of moving faster is that they will make mistakes, but they'll learn too, which should help facilitate more action on this front.

Now, you won't be notified about replies to conversations started by people you've blocked/muted, unless replies are from people you follow.

They're certainly adhering to their new 'move fast' objective.