Back in June, I wrote a post about how Twitter's failure to capitalize on one of their key opportunities, that being it's value as a utility service, with the public, real-time nature of tweets making it the perfect platform to share community messages and information. My point then was that Twitter is now ten years old, and many people have grown up with it, which positions it perfectly to cater to the evolving interests of their user base, as opposed to trying to keep a hold on their place as the "cool" app amongst younger users.

In practical terms, they probably need to do both - keeping in touch with the next generation is critical to sustained expansion. But at the same time, if Twitter were able to highlight their value as a utility service, they may be able to re-frame the platform's importance and make it a more essential app in the lives of more users - which could, in turn, also help them expand their user base and underline their key point of difference.

I was reminded of this again recently because of three new Twitter initiatives which seem to be moving in this direction.

The first is a new integration with Transport NSW in Australia, which enables users to sign up to receive instant, personalized alerts to their mobile devices, helping them to better plan around travel disruptions. 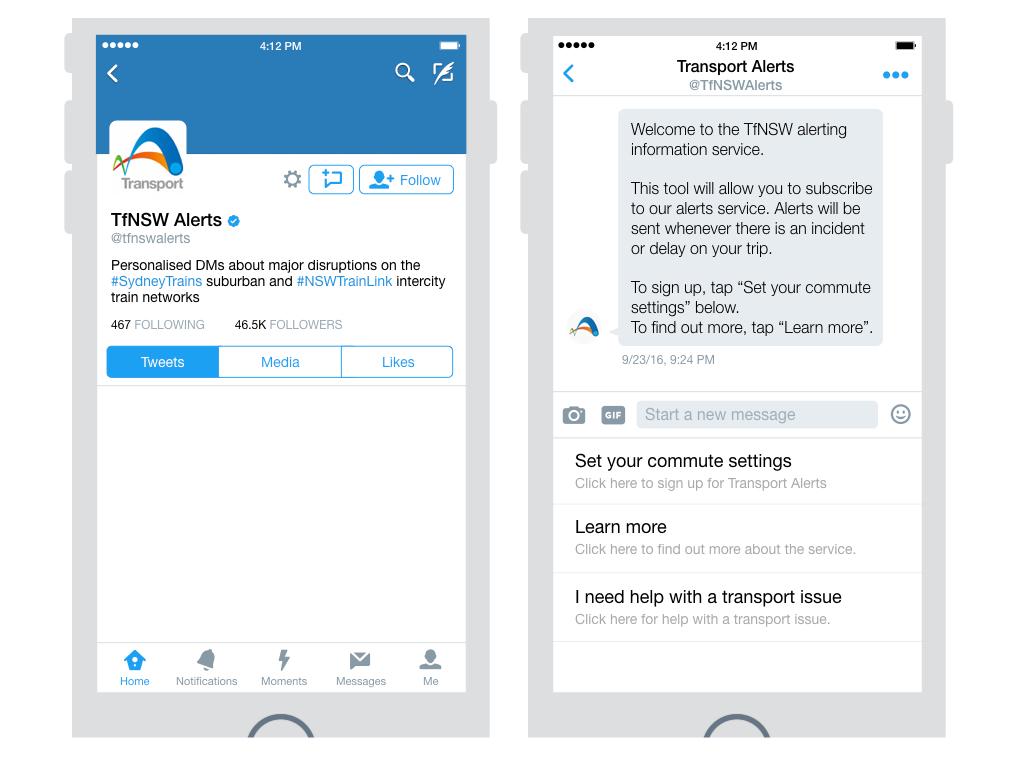 Through an automated DM system - which utilizes Twiter's newly introduced automated customer service tools - users can tailor their alerts by selecting stations they're traveling to and from, as well as their travel times. Once signed up, users will receive alerts instantly when an incident or delay happens on their selected route, or in the locations that affect them, during the time periods in which they normally travel.

Twitter introduced a similar travel alerts system in London back in June, and another in Delhi, India - all three use the immediate, simple nature of tweets to great effect by enabling users to get quick, automated updates on important information as it happens. The Transport NSW variation is more advanced, using the latest tools, but the impetus is the same - Twitter is for real-time, quick updates, to keep people informed, up to the minute - what better way to utilize that capacity than in keeping them in the know about important information which can help improve their day-to-day experiences?

Of course, such a system could also be facilitated through Facebook Messenger, which has significantly more users and is putting increased emphasis on Messengeer Bots. But Twitter is already where more users turn for real-time updates, the platform people go to for customer service requests and issues, where they know brands are listening. 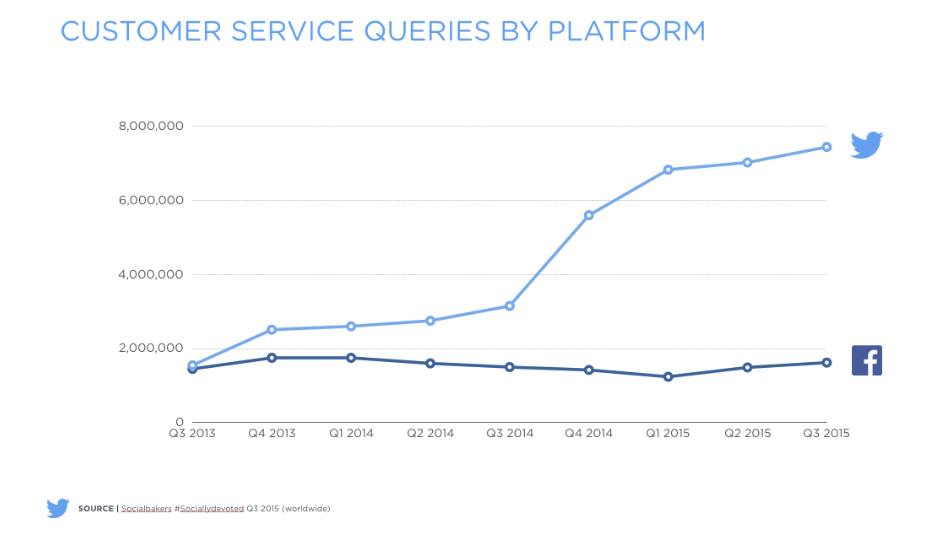 The public nature of tweets also improves accountability and transparency, making it a better platform for sharing news updates, which can be provided on the platform itself as opposed to within DMs. At worst, Twitter is well-placed to compete on this front, and their latest shift towards their own bot response options shows that they are looking to tap into this.

Another initiative announced in Australia this week underlines the same. Working in partnership with mapping and location company Here, Twitter's looking to provide users with a new way to get directions to any destination, including restaurants, ATMs, petrol stations, all via immediate tweet response.

NEW! Tweet our mates at @HERE with hashtag #AskHere for a route or location, and receive a quick Tweet reply to your navigational question. pic.twitter.com/giIfkqiXBR

As shown in the video, the process is fairly simple (though it only works via mobile device and you need to activate the 'Share precise location' option in your tweet).

@adhutchinson National Library of Australia is 6.4km away. It's a 11min drive! Here are some directions https://t.co/vXt8VSUJuo pic.twitter.com/LA0iI9I2fS

And while providing map info is nothing evolutionary, it's another way in which Twitter can be used as a key informational service that's fast, transparent and works to Twitter's key strengths. Part of Twitter's growing pains relate to non-users seeing no real benefit in tweets, no reason why they would want or need them, tweets just don't add anything important to their lives. Applications like this could help Twitter change that opinion - but more importantly, the real benefits of such tools may be best utilized in smaller towns and communities.

For example, earlier in the year Twitter's Data Blog published a post which looked at how the USGS Texas Water Science Center uses fully autonomous Twitter accounts to track rainfall levels and ensure the relevant communities remain aware of the potential for floods in their region.

Now, that information may not be hugely relevant on a global scale, but it's essential to the communities which will be affected. And what's more, many of the people who would most benefit from such updates, in rural and farming areas, would not be among Twitter's core user base - most farmers, it's probably safe to say, don't tweet. But there's a practical use case here, it's immediate, keeping them updated in real-time, and it's posted for all to see and act upon. That's a strong use case for smaller community Twitter groups and tools.

For example, what if there were a local Twitter group which included critical information from your specific area - like traffic incidents and delays, hyper-local weather forecasts, community notes. Sure, you can probably get most of this from your local Facebook community news website, but you might not want all the gossip and debate that comes with it. A localized Twitter stream of 140 character updates on the key information - including important notifications like the above flood updates and related notes - could help keep people updated and informed, and provide a real utility service within each region.

In fact, one town has already done this to some degree - the town of Jun in Spain has made Twitter the primary communications channel for anyone seeking to get in touch with local government officials. 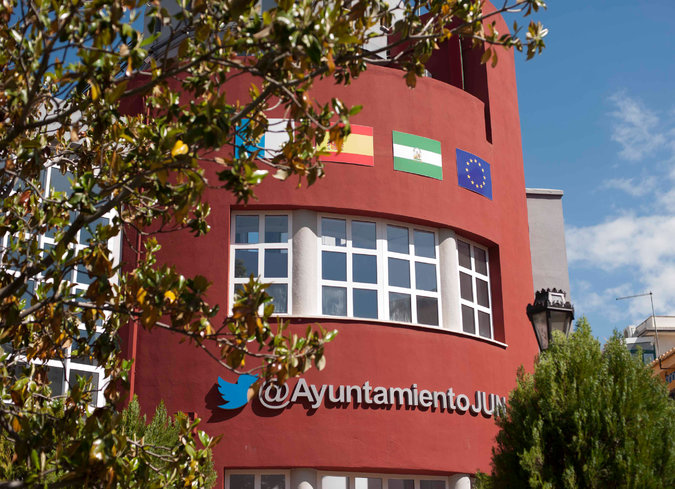 As noted, it does appear that Twitter is working to put more focus on this type of effort - they recently introduced an automated system to help people find out information about where to vote in the US Presidential Election and a new system to get updates on air quality levels in India. These kinds of utility-type tools fit perfectly into Twitter's 'What's Happening Now' focus, keeping people updated on personally, locally relevant information that's available for all to see.

It's fast, it's immediate - and if Twitter's able to expand the perception of the platform beyond being a cool app used by kids, and towards being a tool of genuine benefit for all users, that could help them expand their audience and build a more sustainable growth path.

And given political candidates are now using Twitter as their key platform, it's obvious that there's more to it than emojis and hashtags. Now Twitter just needs to amplify that more practical use case.