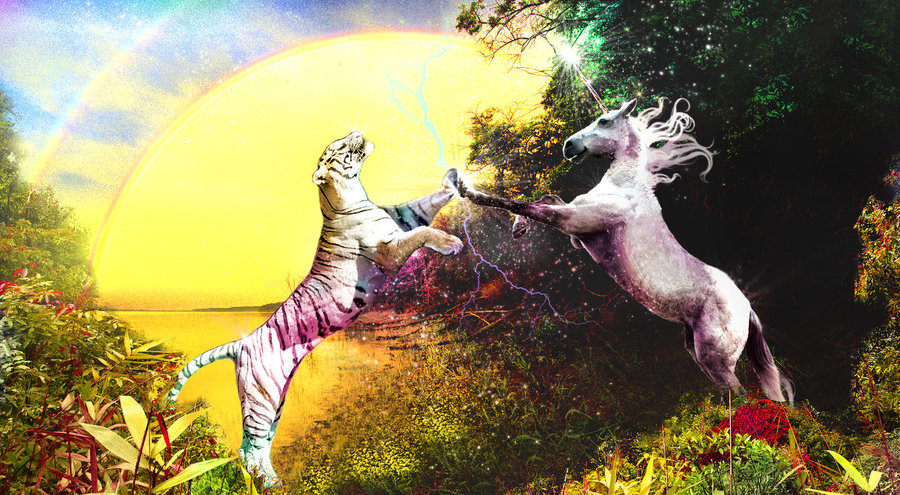 While it's true that Twitter has its problems, in certain cases and contexts, it truly is the best ad platform you'll find, though ultimately it will depend on what you hope to accomplish.

But Twitter offers some unique ad targeting features you won't find anywhere else. These are the unicorns in a sea of donkey ad features.

Don't get me wrong - I love Facebook Ads, Google AdWords, and Bing Ads. These advertising platforms all do a ton of things fantastically well.

But here are five areas where Twitter advertising is superior to other online ad platforms.

1. You Pay for Performance

When you promote tweets on Twitter, you only pay when you've achieved your marketing objective.

Whether your goal is website conversions or Twitter engagement, you only pay when people take that action (any additional organic impressions and engagements are free bonuses). It's the same for everything with Twitter.

If you run an app install campaign, you only pay for the number of successful app installs.

If you run a followers campaign, you only pay for the number of people who hit the 'Follow' button and start following your account.

What's really great here is that Twitter is shouldering some of the risk. Twitter believes their advertising product will deliver exactly what you want.

Keyword targeting is a remarkably interesting and precise way to go after specific people who have demonstrated intent on Twitter.

You can target people who've used a specific word or hashtag in their Twitter update, or people who've interacted with tweets containing those words, in the last seven days.

Facebook doesn't allow you to do this. On Facebook, you can't target by keywords, they only offer topic targeting.

What's the difference? Well, on Facebook I can only go after people who are interested in AdWords as a topic.

On Twitter, I can get much more precise. I could target #ppcchat - a popular hashtag for marketers to talk about all things PPC.

Facebook has an exhaustive list of tens of thousands of topics. But as great as it is, Facebook doesn't have a category for something as granular as #ppcchat.

Let's look at one crazy example of this in practice: #FIFAgate. 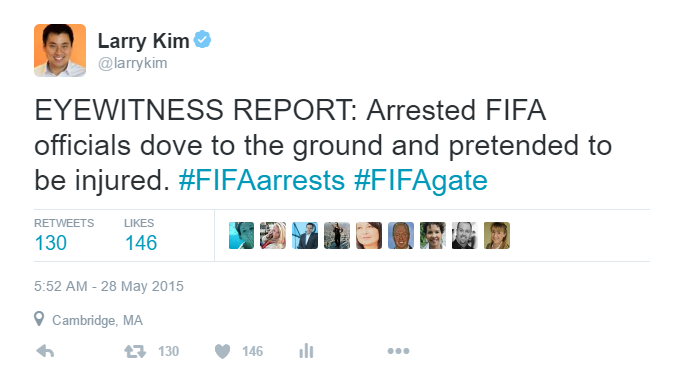 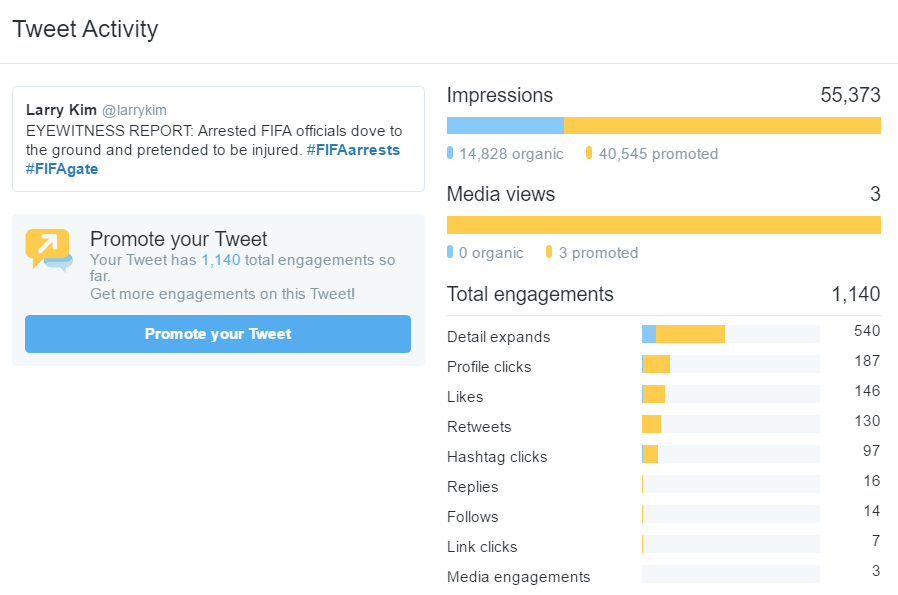 The promotion was hashtag-based. Only people interested in #FIFAgate saw it.

And something funny happened. This promoted tweet ended up being featured in an article, The 14 Best Tweets from FIFA gate. Odds are you won't see something like that happen as a result of advertising on Facebook.

This shows just how amazingly powerful Twitter advertising can be. Instead of tweeting to everybody, you can only target people who are engaged with that topic.

Tweet engager targeting is another way to reach an audience in a remarkably targeted way. With this form of advertising, you remarket to people who recently saw or engaged with your tweet.

This is a real hidden gem of Twitter advertising - rather than going for everybody on Twitter in a non-targeted way, you can target not only the people who saw your promoted tweet, but those people who actually engaged with it.

Targeted people who engaged with your tweets is Twitter's version a laser-guided missile for finding the 1 percent of your most engaged users. Amazing stuff here.

Facebook doesn't have anything comparable to this. The closest thing I can think of is Facebook's great 'invite' option that lets you invite people who engaged with your posts to like your Page.

Plus, there are huge advantages in Twitter's system for having high engagement rates.

Did you know you can target every Twitter user who follows specific accounts with your Twitter ads?

On Twitter, the bar is much lower. All you need is a Twitter user's handle to reach people with your promoted tweets. 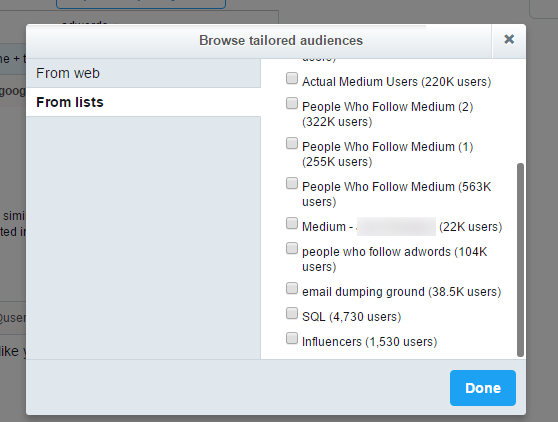 This really is the Holy Grail of Twitter advertising. Tailored audiences makes it super easy to get in front of any account.

On Twitter you can get clicks for pennies. Literally. 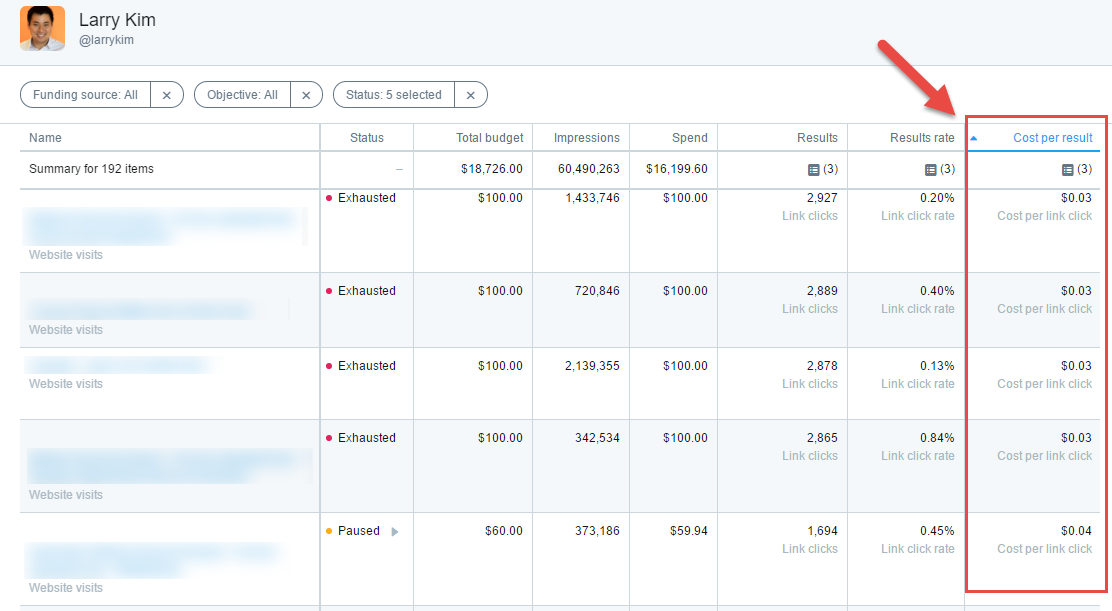 The price of a click is based on the auction - it has everything to do what people are willing to pay.

Advertisers will find life is very cheap on Twitter because of the lack of advertising competition.

What Does It All Mean?

For advertisers, Twitter's greatest weakness - it has a smaller audience than Facebook - is also its greatest strength. As detailed in the five cases above, Twitter can deliver remarkably well for advertisers.

Do you still need AdWords and Facebook Ads? Of course! RLSA and Facebook remarketing, for example, are incredible for converting brand affinity into valuable leads and sales.

But for certain industries, such as news, entertainment, technology, and politics, Twitter engagement is pretty amazing. Tailored audiences and hashtag targeting? These are pure dynamite for creative marketers.

The only downside is that you're only getting the people who use Twitter, a much smaller audience than Facebook. But that doesn't mean you can't squeeze out a great return for your investment.