Mobile Use, Attention Spans and How to Reach the Next Generation of Social Customers

The average human attention span is reducing. That's no big surprise - researchers have been talking about it for years, using the inevitable comparison to a goldfish as the benchmark. But how much have our attention spans actually declined? And, importantly, what does that mean for how we optimize our marketing and advertising messages for best effect?

In a new post on Facebook's marketing blog, Reynold D'Silva, the group head of FMCG, tech, telco and media brands at Facebook, explores the notion of reduced attention spans, noting that researchers from the Statistic Brain Research Institute have found that the average human attention span has dropped by 33% since the year 2000 and is now at just 8.25 seconds (note: goldfish have an attention span of 9 seconds). The decline's largely attributed to increased mobile phone use, a finding which is supported by other research from Microsoft and various other academic organizations, with some even suggesting that the mere presence of a mobile phone reduces our ability to focus on the task at hand.

And again, those findings are not overly surprising. Smartphones and advances in network connectivity have changed the way we live, the way we work and the way we consume media inputs as a whole. These days, there's never any need to be bored - if you're sitting in the doctor's office waiting for your appointment, you can take out your phone and open up the app of your choice. The same applies to waiting for the bus, waiting for your pizza, waiting for... anything. In the modern world, there's rarely such a thing as downtime, rarely a need for our attention not to be engaged in something.

But that constant need for entertainment and activity has also made us more scattered, and causes us to shift focus more rapidly. Because if it's not engaging then guess what? I can go do something else, right now. Any time. We don't need to sit through ads or wait for the good bits to show up. We can just skip to what we want, whenever we want.

Shut it down, open up the next tab, move on.

Logically, our attention spans are reducing because we always have the capacity on hand to do just that.

The impact of smartphones has been huge - larger, even, than many people realize. In many countries, smartphone penetration is now in the majority, with some regions even above 70% - even 90%. Given the increasing adoption of smartphone use, and the correlation between such take-up and the reduction in attention spans, it makes perfect sense that marketers need to take into account that decline in audience focus when crafting their outreach messages.

As noted by D'Silva:

"The current best practices in advertising and brand storytelling often don't work on mobile because they are based on decades of research into the passive medium of television."

This is one of the most relevant points we need to recognize - right now, the way we consume media is in a period of massive change. Rapid developments in technology and data have altered consumer behavior, and as such our approaches need to change in-step. Doing what you've always done won't cut it in the modern media landscape - marketers need to recognize the ways in which the people of today, of right now, are consuming media and work to meet them where they're at. 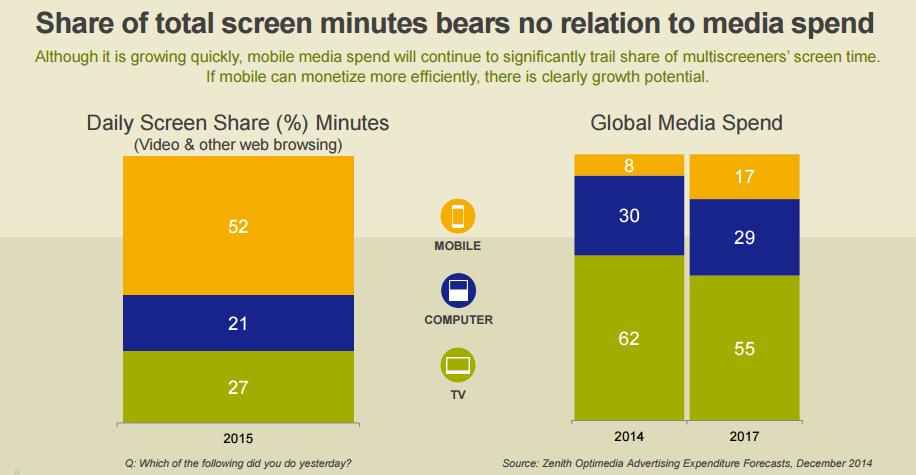 While we're all, by and large, aware of the mobile shift, altering the inertia of years of accepted best practice doesn't happen so easily.

As summarized by by D'Silva:

"We need to unlearn the habits of both 30 second ads designed for TV screens as well as 2 minute plus video ads designed for desktop computers to get the attention of our goldfish audience."

In order to meet the demands of the mobile generation, D'Silva notes that brands need to combine two approaches - the "ABCD"s of advertising with the "Four I's" of Human Computer Interaction on Mobile.

"The current best practices in advertising and brand storytelling often don't work on mobile because they are based on decades of research into the passive medium of television. Successful mobile-first marketing requires the combination of classic, media-agnostic advertising rules with insights from the field of Human Computer Interaction".

In combination, D'Silva summarizes the new, key commandments of connecting with your mobile audience as follows:

These are some interesting ideas, and are definitely worth consideration. As an accompaniment to these stats, D'Silva also references data from Nielsen, which found that 10 seconds is the perfect 'sweet spot' for brand impact created by video ads on Facebook, specifically.

The cumulative finding here being that 10 seconds is the key video length marketers and advertisers should be keeping in mind when working to maximize appeal to the modern, mobile-first audience.

It's an important consideration to keep in mind - while there's still room for longer form content, the value of generating immediate impact cannot be underestimated. Combine this with the amount of video tools which are now freely available via Facebook, Vine, live-streaming, Snapchat - there's an ever expanding array of options on this front. And worth considering - Snapchat's currently the most popular video option among younger users, a platform where the focus is on short-form, disappearing content. Will that focus eventually reduce attention spans even further, or will the limitations on re-watch capacity actually lead to younger users paying more attention to content?

Either way, the data shows that marketers need to be paying attention to the audience behaviors of the modern world, and how they might impact the way consumers respond to their messaging.