Byte, the Second Coming of Vine, Is Seeing a Surge in Downloads Amid Debate About TikTok's Future

With India moving to ban TikTok, and other nations reportedly also considering outright bans of the app due to its potential exposure to the Chinese Government, last week, Byte, which is the second coming of Vine, saw a massive surge in downloads in the US, even reaching the top spot on the App Store charts on Thursday last week, according to Sensor Tower.

As noted by Scott Nover from AdWeek:

Indeed, after US President Donald Trump last week hinted at a possible TikTok ban, many TikTok stars are now scrambling for alternatives, with Byte being a key beneficiary of the speculation around the app.

But it is worth noting that a potential ban of TikTok is largely speculative at this stage.

Last Monday, US Secretary of State Mike Pompeo told Fox News that US authorities were considering a ban on TikTok due to concerns that users of the app were putting "private information in the hands of the Chinese Communist Party." US President Donald Trump, however, said that he was considering a ban as a form of retaliation for COVID-19.

In an interview on Tuesday, Trump confirmed that the Government was considering banning the app, noting that:

“It’s a big business. [...] Look, what happened with China with this virus, what they have done to this country and to the entire world is disgraceful.”

Trump said that banning TikTok was one of several options that the White House is considering to punish China over the pandemic.

Trump may also still be seething over reports that TikTokers caused his campaign to over-estimate the size of a recent rally - with over a million people expected to attend a support function in Tulsa, official figures suggest that only around 6,000 people actually turned up. A hoax campaign originating from TikTok is said to have been the cause of the massive increase in ticket requests prior to the event.

An official ban on the app would still likely be subject to an official review by the Senate - though, theoretically, the Trump administration could issue an Executive Order, blocking it immediately, similar to how India has enacted its ban. And with Trump confirming that possibility, TikTokers who've built huge followings on the app, and have even become reliant on it for their income, are understandably spooked.

Which leads us to Byte, the 6-second looping video app that was released to all users back in January. 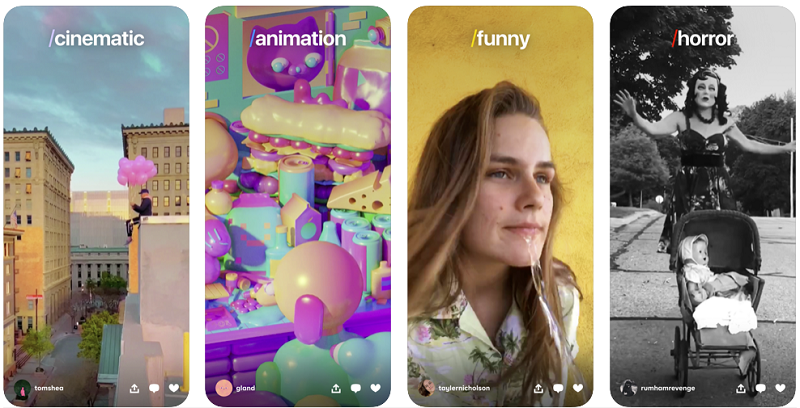 Byte reached 1.3 million downloads in its first week after full launch, but it hasn't gained significant momentum since, while TikTok has continued its meteoric rise throughout the COVID-19 lockdowns.

Byte has since sought to further align itself with TikTok usage - in April, it extended the time limit of Byte clips from 6 to 8 seconds, while it's also added new music tools to further align with the TikTok use case.

And it's wasted no time in adding even more TikTok-type tools as it opens its arms to migrating users.

The sounds element, in particular, has been a much-requested feature from TikTok crossovers.

So what does that mean for your digital strategy?

At the moment, TikTok still offers significant opportunity to reach younger audiences, especially with the recent expansion of TikTok's self-serve ad platform to all businesses.

That will facilitate more opportunities for reach and exposure - but then again, there are concerns that any information you share on TikTok could be accessed by the Chinese Government. Some brands simply won't feel comfortable with that - and as such, will not be looking to TikTok to expand their business presence online.

But maybe Byte will provide a better alternative. Right now, Byte would still be a long way off TikTok in terms of active users, but as more influencers look to, at the least, diversify their digital presence in order to mitigate the impacts of a potential TikTok shutdown, that will likely see Byte's audience continue to rise.

At some point, that may make it a more significant consideration.

Maybe it's worth downloading the app yourself, and reserving your brand handle for potential future shifts.