Changes Could be Coming for Twitter's Explore Page

Do you use Twitter's Explore tab?

The Explore tab, signified by the magnifying glass icon in the lower function bar, connects you to trending topics in your region, with a swipeable list format along the top of the screen to check out rising discussions in various categories. 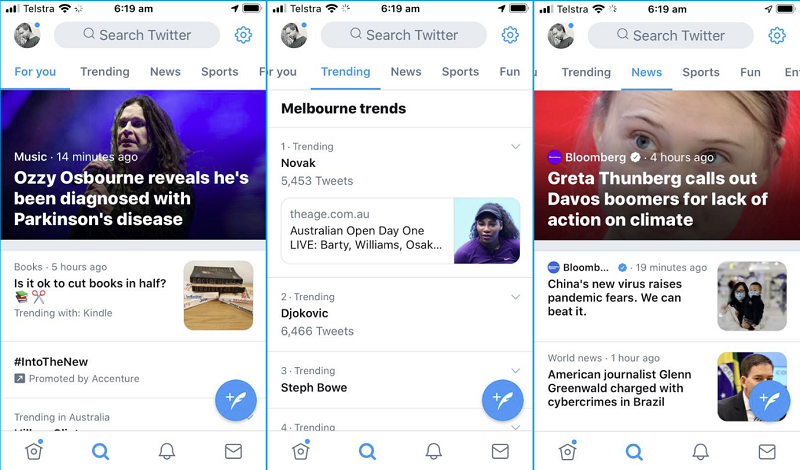 As part of its enhanced focus on topics, and connecting users to the tweets that will be of most interest to them, Twitter has been working to refine its Explore listings of late. You might have noticed a few weeks back that topic listings disappeared from the main page, for example, then returned a few days later.

Well, Explore could be set to change again - this week, Twitter product designed Martin Craster has put out a call to users asking for feedback on how they can improve Explore in line with audience need.

Why do you currently use the For You tab?

What would you like to see or expect to see in your For You tab?

Do you use any other tabs within Explore? If so, which ones and why?

DM's are open if you prefer private

As noted, the focus on Explore aligns with Twitter's broader shift towards increased relevance for content listings, with topics now becoming a much bigger element within its growth plans. If Twitter can improve its topic listings, and showcase more relevant content to users, that could go a long way in helping it to improve engagement. And worth noting, Twitter has been improving active engagement levels within the app consistently over the past two years.

This is where Twitter's growth focus has shifted - traditionally, Twitter has been compared unfavorably to Facebook due to its slower, even non-existent at times, user growth. While Facebook is now up to 2.4 billion monthly active users, Twitter has struggled to rise above 330 million, a fraction of that figure, which had lead to decreased market perception, and thus, lower ad spend. Twitter sought to re-frame this last year, with the introduction of its mDAU, or 'monetizable daily active user' count, which puts the focus on active users who can realistically be served ads, as opposed to the highest possible count of people who come into contact with the app.

Twitter's mDAU count is steadily increasing, and if it can refine its functionality, through updates like a more relevant Explore feed, Twitter can continue to improve its in-app engagement performance, potentially improving its position as an ad platform moving forward.

And Explore could play a significant part in that. It's not clear, as yet, what changes could be made, but the fact that Twitter's team is now putting out the call asking for feedback on how to improve it would suggest that change is indeed coming.

There's a range of ways that Explore could be developed. It'll be interesting to see what comes of this new focus.