While Clubhouse downloads are slowing in the US, the audio social app is gaining momentum in other regions, with the launch of its Android app last month opening new opportunities in a range of key markets.

Among those are India and Brazil, where Android is clearly the dominant OS, and in order to capitalize on this attention, Clubhouse is quickly expanding its creator funding and training program, 'Creator First', to provide more opportunities for creators in these nations.

Clubhouse announced Creator First India last week, with Brazil now getting its own dedicated version of the initiative. 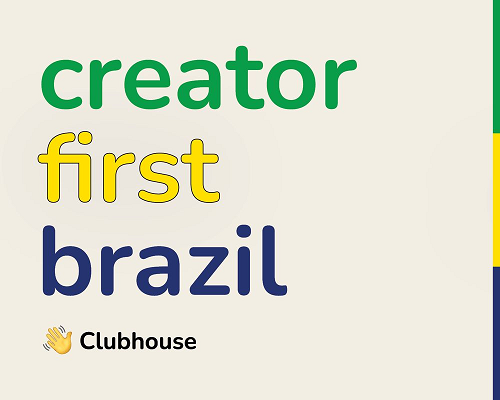 "Aspiring moderators, hosts, and creators on the platform will receive direct support around production and creative development, with promotion of their shows, as well as financial support by matching creators with brands or a monthly stipend."

As noted, Creator First Brazil will provide selected participants with ongoing support and guidance to help them evolve their concepts in the app. Clubhouse is also offering those in the program a guaranteed income of at least $US5k per month to assist in their efforts.

Clubhouse hasn't released any official numbers, but clearly it is gaining traction with Brazilian users. Last week, Clubhouse updated its app icon to an image of Brazilian @dandarapagu - "a singular voice that represents the Clubhouse community at its best".

"Dandara first rose to the top of the Brazilian Clubhouse scene when she began moderating conversations for creators dealing with impostor syndrome, race, human rights and entertainment during which she interviewed well known television personalities."

Clubhouse also notes that Brazilian members of the Clubhouse community "have emerged as some of the most exceptional, creative and exciting in the world".

Given that 92% of Brazil's adult population now has a smartphone, at a total population of 214 million, it makes sense for Clubhouse to make the nation a key focus, and if it can boost usage in both Brazil and India, that could go a long way towards helping it maintain growth momentum, even as Twitter and now Facebook launch their own audio social options.

It remains to be seen whether this type of funding is a viable model to kickstart momentum, and keep audiences coming back, but Clubhouse is working to explore all opportunities as it looks to cement a place in the social sphere.