It's hard to say how successful Watch is, or will be, based on its performance thus far, but as per Facebook, it is seeing more usage over time:

"Today, more than 1.25 billion people visit Watch every month to discover and share videos from millions of creators and publishers."

Which sounds impressive, right? 1.25 billion people is almost half of Facebook's 2.7b monthly active user base.

As with Facebook's previous reporting of Watch viewership, the actual engagement figure is slightly diluted by the way in which Facebook counts its active viewership. In June last year, Facebook reported that 720 million people were spending "at least one minute in Watch" each month. That figure has almost doubled, which is significant, but a minute per month is hardly indicative of solid engagement.

Facebook hasn't clarified if this new stat is based on the same 'minute per month' measurement, but we can assume that it's the same count, and as such, it's not really as impressive as Facebook's main statement sounds.

But still, it is increasing, Facebook is successfully encouraging more people across to its Watch platform. How you view that will come down to your own perspective, but clearly, there is significant engagement with Facebook's original video content. It's just hard to say exactly how much, and how engaged they actually are.

Statistical anomalies aside, Facebook continues to push ahead with Watch, and has this week outlined some new tools to help users discover more relevant Watch content, based on their interests. 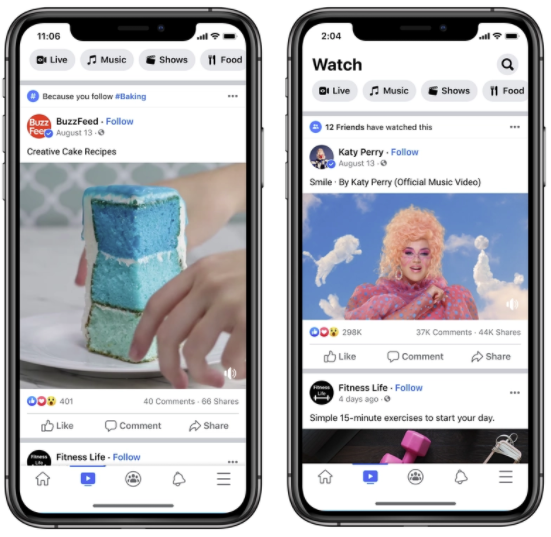 "We’ve made it easier for people to find more videos they’ll like with better navigation, expert curation and smarter machine learning. And we’re working on ways to connect people with videos that match their interests."

In addition to this, Facebook has also added a new, dedicated section within Watch for live videos, which it recently used to host the UEFA Champions League final.

"Across Latin America, more than 13.7 million people tuned in to watch the UEFA Champions League final, making it the most-watched football broadcast on Facebook. Events like these are more than a stream of a game, they’re a way for fans to share in the moment by interacting in real time with the broadcaster and others."

Facebook also recently added a new section for music videos in the US and India, which had previously only been available in Thailand.

Debuts like that could end up playing a key role in the development of Watch. Music videos are huge on YouTube, with seven of the top 10 most viewed YouTube videos of all time being music clips from popular artists. If Facebook can get some of those as Watch exclusives instead, that could bring more viewers across, and form a launching point, of sorts, for more people to discover Watch content.

In addition to these new curation options, Facebook also continues to develop its creator tools for the platform, including fan subscriptions, Stars and in-stream ads.

And in welcome news for both creators and marketers, Facebook's also developing new analytics options to help maximize your Watch uploads.

"We're in the early stages of rolling out a new Organic Video Post Testing tool to help partners A/B test aspects of a post, including thumbnails, titles, descriptions and video content so they can better determine what works best for their audience."

With videos the best performing content type on the platform, insights like this could be hugely valuable, and it'll be interesting to see what exactly, Facebook comes up with on this front.

As noted, it's hard to say how successful Facebook Watch is, really, but the numbers show that it is gaining momentum. And as it does, it opens up more opportunities for marketers.

How successful your campaigns will be will depend on your brand, your campaign and your targeting, but Watch may well provide new opportunities for those looking to reach audiences via the platform.