Facebook's looking to add an extra level of insight to certain search results, with several users reporting a new Knowledge Panel type display for some queries in the main app, with an overview ported from Wikipedia. 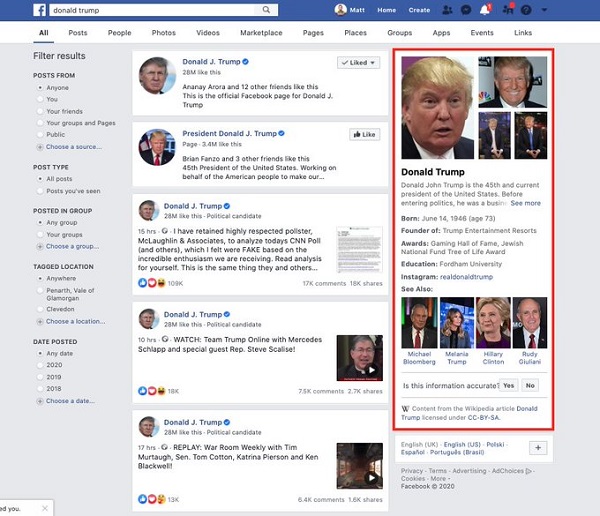 As you can see in this example posted by user JC Van Zijl (and shared by Matt Navarra), the new panel displays a summary of key information from Wikipedia, including biographical info (for people) and a link to any official Instagram account, along with a display of related entities. 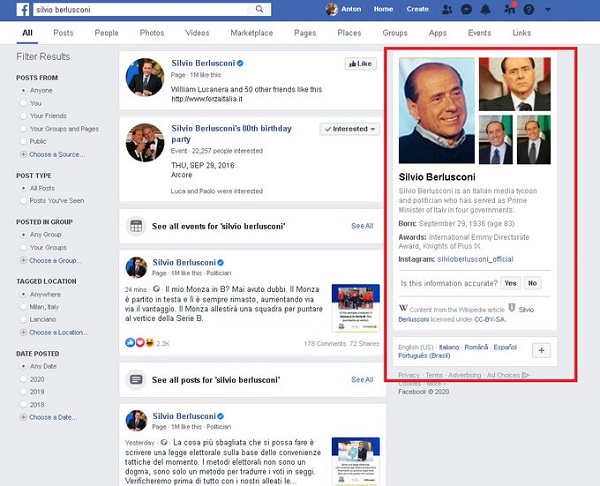 The addition is very similar to Google's Knowledge Panels, which it launched back in 2012, and are also largely populated by Wikipedia info. Knowledge Panel listings can serve various purposes, including providing contextual insight, keeping users on platform for longer, and - for those that have them - adding more authority to your presence.

In Facebook's case, it could help to highlight questionable information - if you look up info about a certain person, and the Wikipedia panel listing shows that he/she is a known activist, or a member of a controversial group, for example, that could see users second guess any information they were looking for.

It may also serve as a fact-checking tool for other terms outside of notable identities - if you look up 5G, for example, and Facebook highlights a Wikipedia link, that could help to connect people with more credible, researched information on the technology, as opposed to simply displaying a list of the most shared posts relating to consipiracy theories.

The distribution of misinformation has become a major problem for Facebook - with the platform's algorithm designed to feed into engagement trends. That means that more controversial, divisive posts and updates, which generate a lot of discussion, tend to generate more exposure within the app - so a basic article about the science of 5G probably won't generate a lot of discussion, but a headline like:

As you can see, that's going to prompt more engagement and reach (and note, this was the second result Facebook returned in a search for the term '5G' right now).

Maybe, by adding in Wikipedia links, it will provide more reputable sources of research, which may help to reduce the sharing of such.

We've asked Facebook for more info on the test, and whether it's being rolled out to all. Thus far, it appears to be enabled for some users in Europe.